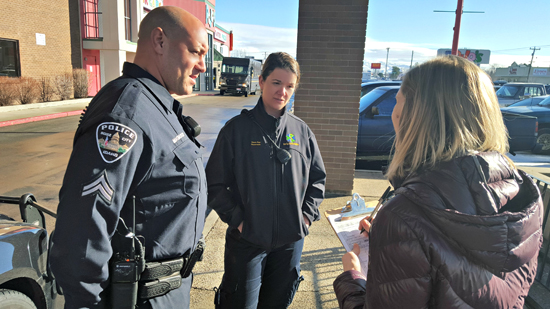 Emergency responders in EMS and law enforcement have been the front line for mental health crises throughout history. Agencies have responded to this role in a variety of ways–all of which have helped provide a more sensitive response to these vulnerable individuals, and spawned myriad deployment models across the nation.

Whether agencies increase mental health training for responders or create nontraditional response teams, communities are bettered by collaboration. That’s why community paramedics in Ada County, Idaho, created a program that brings EMS, law enforcement and mental health clinicians together to serve its residents. In doing so, the program has saved healthcare dollars, decreased time to definitive treatment for persons in crisis, and reduced preventable hospitalizations.

Law enforcement agencies in Ada County respond daily to an ever-increasing number of calls involving persons with mental health issues. In the state of Idaho, a sworn police officer is one of two individuals authorized to place a person on an involuntary mental commitment hold. Officers may take a person into custody whom they determine meets Idaho Code 66—326 of being “gravely disabled,” or their “continued liberty poses an imminent danger to that person or others.” Once placed on this hold, an officer within Ada County is required to transport the individual to an ED or call for EMS to do so. EDs medically screen the patient and arrange for placement at one of the local inpatient psychiatric hospitals.

This process is commonly called a “24-hour hold,” but this nomenclature is misleading. An individual will be hospitalized for more than 24 hours, possibly up to 72 hours, before they’re evaluated by an examiner.

The MCU also provides mental health crisis screening and intervention for the Psychiatric Evaluation Team (PET), a 24/7 crisis hotline and in-person crisis service in the community. The PET serves the courts by conducting mental health assessments as ordered.

The concept for PET was first proposed in the summer of 2013 by Jeremiah Wickham, an Ada County community paramedic, after he recognized the potential cost savings in diverting involuntary mental holds. After convening a stakeholder group that included representatives from local hospital systems and inpatient psychiatric facilities, all Ada County law enforcement agencies, Idaho Department of Health and Welfare’s MCU, and others to discuss the issue, a final consensus was reached. Under the guidance of the stakeholders, community paramedics would pilot a screening process to medically evaluate individuals placed on an involuntary mental hold by law enforcement. The medical screening criterion was based on physiological standards that are intended to determine an individual’s medical stability. Community paramedics would also obtain a thorough history of the present event, as well as any medical history that would warrant a more thorough evaluation by a physician.

From Nov. 1, 2013, to Feb. 28, 2014, community paramedics screened 56 individuals using the elected criteria. Twenty-nine (52%) people passed the screening and were considered a positive evaluation. During this pilot, community paramedics responded to any 9-1-1 call where a person was being placed on an involuntary mental hold, without regard for presenting a complaint. This method ensured that the screening tool was utilized on a variety of patient presentations, thereby collating the best data available. No person was diverted during this pilot phase, and once it was completed the screening data was compared to ED medical evaluations. The in-field medical evaluation was validated, as no medically compromised individuals passed the screening tool. (See Figure 1, below.) 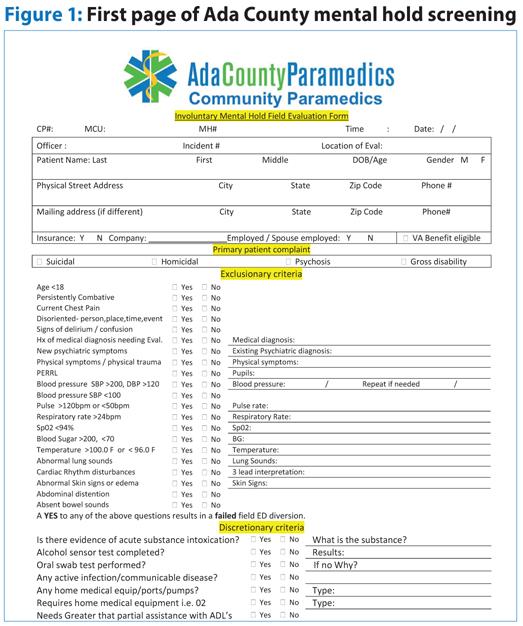 In September 2014, under the guidance of Ada County paramedics’ medical directors and inpatient psychiatric facilities, we began a beta phase to implement screening and diversion. The phase lasted six months, with goals that included collating sufficient data to prove cost savings, ensuring law enforcement support, and determining any logistical barriers to the program.

A significant program change was the addition of a dedicated MCU clinician to work alongside community paramedics and officers, providing expert mental health assessments and resources. The clinician also coordinated the direct admission of a patient to an inpatient psychiatric facility after they had been medically evaluated. We held informational staff meetings at all involved locations, and our paramedics attended shift briefings that educated law enforcement officers on the new processes.

Paramedics were available in the field seven days per week from 4 p.m. to 12 a.m. These hours were selected based on data collated by the MCU, which plotted the time of day of all involuntary holds enacted by officers. The clinician was available to respond in person during these hours, and remained available as a resource for officers 24/7. Throughout the shift, paramedics monitored the computer aided dispatch (CAD) system for both EMS and police, screening for call types that involved a mental health component. They contacted the officers and/or EMS crews by mobile data terminal, phone or radio to advise the PET’s availability and response time. Officers and EMS crews were also encouraged to request the PET as necessary, which grew popular as personnel became more familiar with the team and the assistance it could provide. MCU clinicians could also initiate help from the PET for calls received by their crisis line from individuals who were in need of involuntary hospitalization.

At the end of the six months, leadership within Ada County and the MCUs decided to continue the project, though the hours and days were changed to Monday through Friday, 2—10 p.m. Officer feedback greatly influenced the decision to continue, as the PET became known as a valued resource. Discussions with the psychiatric facilities involved also yielded support for continuation. They reported no negative outcomes and patient experience was believed to have improved from immediate hospitalization. 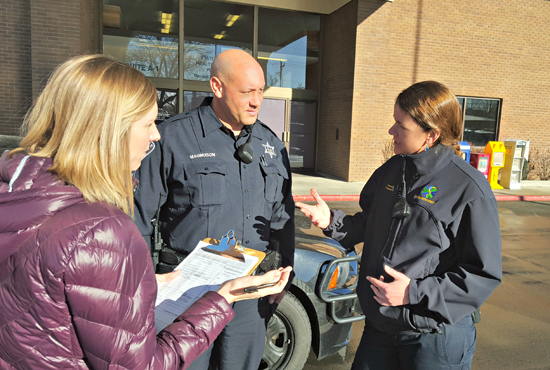 The PET serves the courts by conducting mental health assessments as ordered.

After 14 months of the program, the PET had responded to 329 calls and evaluated 120 individuals who were placed on involuntary holds. Of these, 38 were diverted from EDs at a cost savings estimate of $2,400 per diversion. (See Figure 2, below.) In addition, the PET completed a total of 33 hospitalization diversions, bypassing the involuntary mental hold process completely by establishing an immediate safety plan and subsequent follow-up with individuals, as deemed appropriate. Utilizing the MCU’s expertise in evaluating individuals in crisis, and furthering the World Health Organization’s principle of utilizing the “least restrictive treatment,” the 33 diversions saved an estimated $165,000. This figure represents an ED evaluation and a three-day average length of stay for an individual with a first negative designated exam. What this figure doesn’t include are the associated court costs or the cost of involuntary hospitalization to an individual, such as the loss of income, insurance co-pays, etc.

After contact with the PET, 50 individuals opted to admit themselves voluntarily to an ED for psychiatric evaluations and five were accepted by inpatient psychiatric facilities on a voluntary basis. Due to insurance regulations, voluntary direct admissions are difficult to coordinate without an ED evaluation. We’re continuing to work on ways to enable this option for those seeking treatment.

Calls continue to be identified through CAD as well as through police officer requests. This method isn’t perfect, however, as the PET wasn’t involved in 124 mental holds that were initiated by officers for unknown reasons. Improved dispatch methods and furthering officers’ understanding of the process will likely decrease this number as the program progresses. 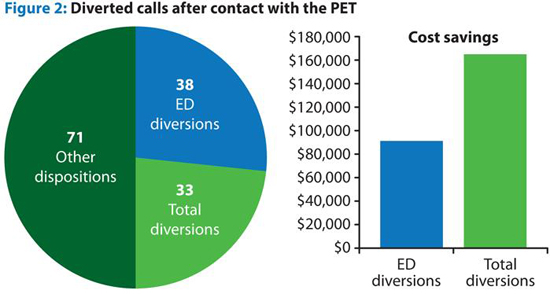 Teresa Shackleford, clinical supervisor of the MCU, said this protocol has proven to be effective in the field.

“When we began the PET project, we had one rather modest goal in mind–medically clear involuntary psychiatric patients in the field whenever possible, thereby bypassing the ED, resulting in direct psych admit. Since the project went live, the PET team has not only prevented unnecessary ED visits, but we have also prevented many unnecessary hospital admissions.”

By working with officers on scene, MCU clinicians can implement safety planning, resource referrals and follow-up services. When appropriate, an involuntary hold and subsequent hospitalization may be avoided altogether, an outcome that’s only possible with the collaboration of the PET.

Shackleford said she’s seen other unanticipated outcomes as well. “In addition to those exciting results, Mobile Crisis has noticed a significant jump in calls from law enforcement officers seeking consultation on cases outside of the hours of the PET team project. Overall, collaboration between our local agencies has increased dramatically, which helps us to serve the community more effectively and helps our mutual clients have a better experience when they find themselves needing our assistance.”

In response to the increasing number of calls involving mental health issues, the Boise Police Department hired a mental health coordinator to assist officers in both a proactive and reactive manner.

The PET team has established itself as a valued co-responder to Ada County law enforcement agencies, acting as an in-field resource not only for mental health issues, but also for individuals with dementia and developmental disabilities. What began as a project to save healthcare dollars has become a valued resource for patrol officers during a variety of emergency calls. This collaboration provides officers with better tools to respond to calls involving medical and mental health issues, and gives individuals experiencing mental health crises appropriate, timely treatment and resources.

“The PET has greatly helped our patrol deputies in the field,” Ada County Sheriff Department Patrol Supervisor Sgt. Ron Santucci said. “They simply have the knowledge that the average patrol deputy does not when it comes to dealing with people in crisis. The service this segment of people is now getting is much better. After having been a police officer for 25 years, I can tell you that deputies will not call for a service unless it works! “

“Partnering with the PET provides responding law enforcement officers the capability to assess and divert citizens in crisis to much needed resources. The knowledge and skillset of PET members is a valuable resource and appears to decrease the workload of emergency services by handling calls for service properly and safely the first time,” Boise Police Officer Zach Powell said.

As the PET continues to establish itself, the need for outcome data from across the treatment spectrum becomes increasingly necessary. Obtaining patient information from the systems involved has proved to be difficult, but it’s a high priority of the program. The team continues to track response outcomes and works to consistently provide a timely service to the community.

One of the program’s main goals is establishing a reproducible model for law enforcement, EMS and MCUs across the state. As community paramedicine in Idaho continues to grow, more of these collaborative relationships will likely prove effective–both in healthcare dollars and patient experience.