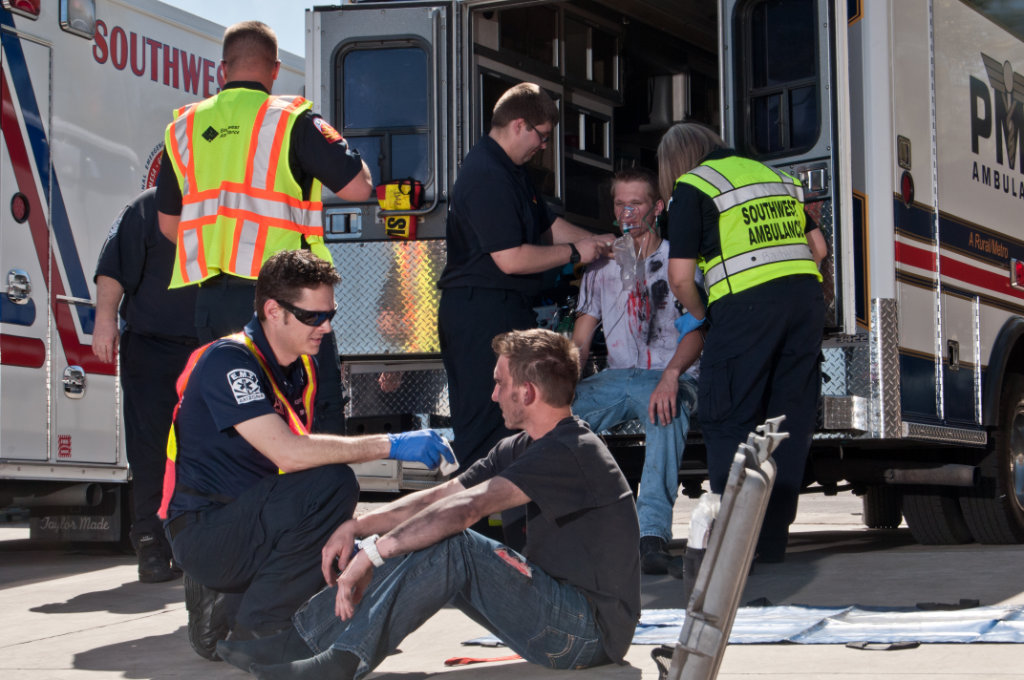 I looked over as my partner drove the first-in ambulance up the exit ramp to the elevated portion of I-70, and gasped. “There must be 60 cars over there,” I told him. Black ice had formed on the road (when the wrecks were counted, there were 59 vehicles). The good news was that our 400+-pound dispatcher who had been on his way to work was up and walking, gingerly, on the slippery roadway.

The bad news was that the incident command system (ICS) was still evolving in the minds of Alan Brunacini and others. Unified command, a coherent staging process, and radio frequencies in common didn’t yet exist in the early 1980s. Luckily, injuries were few and minor.

With the evolution of active shooters and terrorist attacks, of course, intensive planning, preparing, and rehearsing for large-scale situations has (rightfully) earned a prominent place in EMS awareness and training. The fact is, we have to be perpetually ready for many different events that may never happen in our world. It’s one of the coolest reasons for being in EMS: You never know what each new day will bring.

Being ready for anything, though, is also a real challenge. It’s why we train, and why we can never stop continuing to learn and improve. Yet how often will you be the first-in on an MCI?

Honestly, in more than 10,000 emergency calls, I remember only the scenario above and a couple of others that involved mass casualties. Although MCI-specific training is certainly valid and important, particularly when done with nearby mutual aid agencies, the flaw is that each person practices just their one small part. There are only a handful of people in command. Unless you’re one of them, you won’t be prepared to be first-in.

Theoretically, chain of command will kick in as an MCI evolves. People with the best experience will eventually arrive to help. Sometimes, the first-in crew will retain command; other times not. Those details depend on each emergency system.

For the first-in crews, there’s plenty of work to be done. How to honestly prepare–logistically, physically and emotionally–for the role that could place you, someday, at the tip of the MCI spear? Mental rehearsal. Every day. With your daily situation as your template.

Say you’re waiting for calls near the mall. You could snooze, or browse a magazine–or you could spend 10 minutes pondering “what if.” Set up potential scenarios based on what’s right outside your window.

What if you arrived at a crash at that nearby busy intersection and saw that a vehicle had plowed into a truck, pushing it into a group of pedestrians who were crossing the street? Imagine that there are 15 people in trouble. What’s your first action? How will you calm your own inner response (which probably includes an expletive or two)?

Rehearsing a commanding, measured approach will help you do it when the time comes. Hear your choice of words to dispatch as you ask for more resources, and the way you and your partner quickly agree on roles. Maybe one of you will stay by the ambulance in command with the radio while the other does a quick round of triage. Practice in your mind’s eye specific actions for managing the highly charged atmosphere and chaos. Use the area right there, outside your window, to train your eye to see useable space for triage, and the best ingress-egress plan for incoming emergency vehicles. Practice radio transmissions in your head, with yourself speaking calmly, clearly and with authority. And so on, until you know you have managed the MCI correctly, completely, and confidently.

Practice ICS on Every Call

The beauty of ICS is its ability to expand according to the speed, size and severity of the situation. As Brunacini once wrote, “The reality of our business is that we must use routine local, everyday small-scale events that occur all the time to set the stage of how we will operate when the infrequent “˜big one’ hits.”

Practice on everyday calls, but be mindful about how you do it. Whether you respond as a two-member crew of an independent ambulance, or as an assigned fire crew where you hold the same seat and role every time, or more loosely, as a volunteer in a service where you might hold any role at any time, the opportunity exists on every call to practice ICS. Memorize the framework, know the terminology, mentally rehearse your actions, even when it’s not “ICS training night.”

ICS is one of the better inventions in modern emergency care, a gift from the days when seat-of-the-pants efforts yielded results based mostly on luck. Deliberate, daily practice can and will strengthen your capabilities and help you prepare for that day–which hopefully will never come–when you look out the window to see a big, horrific scene.