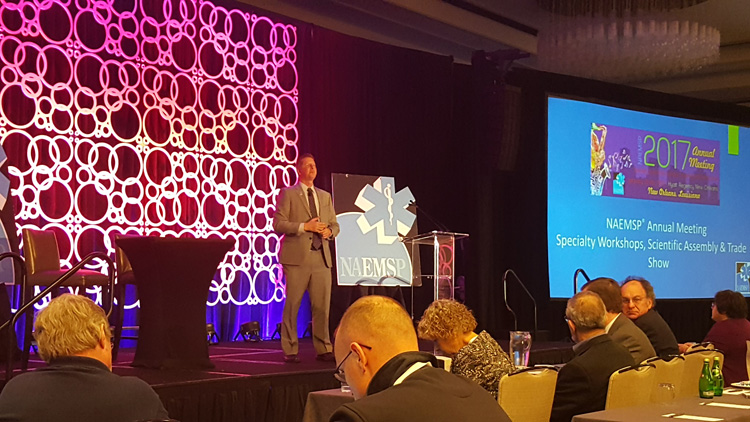 Chris Hunter, MD, PhD, FACEP, Director of the Health Services Department for Orange County, Fla., spoke to the audience at the National Association of EMS Physicians (NAEMSP) annual meeting in New Orleans about the lessons his department learned during the Pulse Nightclub Shooting, which occurred in the early hours of June 12, 2016, when an attacker entered the Orlando nightclub and began shooting.

The attack and subsequent hostage situation lasted over three hours and resulted in more than 100 victims, including 49 fatalities. Dr. Hunter discussed the response from the Orange County EMS System, from the initial encounter through the mass casualty incident.

The incident occurred about 600 yards from the ED entrance of Orlando Regional Medical Center (ORMC) and across the street from an Orlando fire station. The initial shooting stopped in minutes, but then continued on for three hours until the shooter was engaged and killed.

ORMC went into a Code Black status, stopping receipt of all patients other than those from the Pulse Nightclub incident. Civilians who were involved did not leave; they stayed and assisted in the carrying, care and transfer of patients at the scene.

The police transported 30% of the casualties using pick-up trucks during the early phases of the incident because they were there in mass early and better protected than EMS personnel.

The amazing thing about this incident, which is a great testimony to the care provided by the first responders and ORMC staff, was that every patient who survived to ED admission is still alive today.

To continue the conversation about MCI preparedness and training, JEMS is hosting a series of super-sessions at EMS Today 2017 in Salt Lake City, Utah. On Feb. 23, join us from 8:00—10:00 a.m. for Lessons Learned From the San Bernardino Active Shooter Incident, and on Feb. 24, from 8:00—10:00 a.m. for The Orlando Fire Department Response to the Pulse Nightclub Terror Attack.

For more information on the rapid removal, assignment and tracking of patients, read Duck vs. Bus Complex MCI on Seattle’s Aurora Bridge in the November 2016 issue of JEMS.