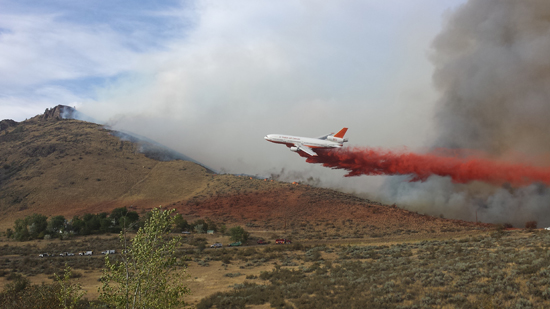 In July, our beautiful Methow Valley in north-central Washington state–and the wonderful people our EMS agency is entrusted to care for–was threatened by the fast-moving Carlton Complex Wildfire: the largest wildfire in Washington’s history.

The wildfire was sparked by lightning, burned more than 250,000 acres and destroyed more than 300 homes. The fire was unusual because, at its peak, it was spreading at one acre per second. Counted among hundreds of dead cattle were deer, cougars and an eagle.

Most of the homes lost were scattered throughout the entire valley instead of concentrated in a single area. The destruction depended on the vegetation, geography, and high and unpredictable winds.

Managing the response to this massive wildfire was an emotional roller-coaster ride. My friend and former student, fire captain Shaughn Maxwell, EMT-P, checked in with me several times during the early hours of the escalating incident while he was vacationing in Oregon. I tried to sound 100% prepared and confident when talking with him, stating, “I got this.” My confidence wasn’t enough, however, and he said he’d start heading my way. Just as the fire crested the first hill, Maxwell showed up with fellow firefighter Kurt Hilt, EMT-P, and their medical director, Richard Campbell, MD. We all went right to work. 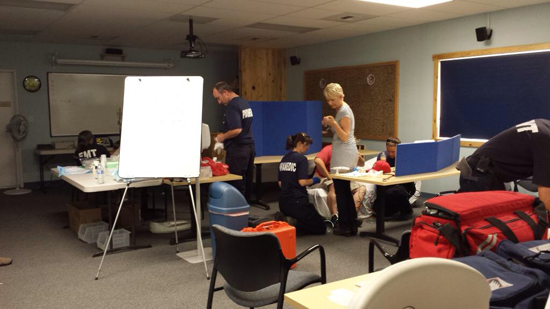 The Aero Methow Rescue Service MASH unit consisted of an emergency physician, nurse practitioner, EMTs and paramedics who attended to critical patients, some of which were later airlifted out as smoke conditions permitted. The mountains around this building were surrounded by fire, the 9-1-1 was overloaded and this building was running on generator power. Photo courtesy Kurt Hilt

Losing Power
We lost power in the valley at 4 p.m. on July 17 after the fire burned two key utility lines. Power wasn’t regained until July 25–nine long days later. There were times when all long-distance phone service, Internet and cell service also went down.

During this period, fire and EMS stations were staffed around the clock for citizens to report 9-1-1 emergencies in person. In our modern age we take 9-1-1 capabilities for granted, and it was a very uncomfortable feeling knowing citizens couldn’t pick up their phone to call for help.

Our EMS facility has a 25kW generator, solar panels and battery backup, which was fully functional during the outage thanks to the availability of propane fuel. It was more than a 10-mile drive up a windy dirt road to our repeater, so we had to be prepared for backup communications in the event of a repeater failure. Fortunately, we also had a HAM radio set in our facility, and its operators came in to assist us and were prepared to assume control of our communications in the event our main repeater went down.

Effects of the power outage were apparent everywhere. The lines of cars at gas stations were reminiscent of the 1970s. Credit card and debit card machines weren’t functioning, so the Methow Valley moved to a cash-only economy. Tourists in the valley’s motels wanted to leave because there was no power, and recreation came to a halt. Helicopters were also retrieving water from the lakes and rivers, further interrupting recreation and creating new hazards.

Strained Resources
The roads to our nearest hospitals–Mid Valley in Omak and Three Rivers Hospital in Brewster–were closed due to fire on both sides of the road, and trees, debris and firefighting equipment on the road. We were left with one exit from the valley: Highway 20, which traveled over a mountain pass and through a national park, and was 2.5 hours away from the nearest hospital on the other side of the Cascade Mountains.

And, at the same time the firestorm was raging, there was a rhythm and blues festival about 10 miles away with 2,500 attendees and scores of concert staff and band members who had to be accounted for and protected. With the loss of EMS resources covering the concert and an increase in demand of medical services, the festival increased the demand on our system. 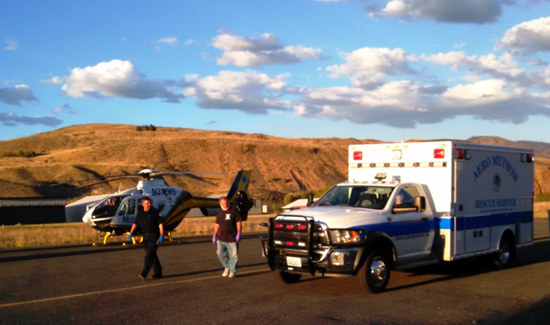 Patient Care
On any given day, our facility is the go-to spot for anyone who has a medical emergency and is unable to find any local help. Therefore, it was natural for those in need to come to us for help and advice.

Realizing we were quickly becoming isolated, we set up a mobile army surgical hospital (MASH)-style unit in our training room. We were also aided by the stored medications in our local clinic’s refrigerator.

Three Rivers Hospital supplied us with a local nurse practitioner. Shortly after becoming operational, we were quickly inundated with patients. At one point we were busy attending to four patients requiring urgent care while an EMS crew waited at the airport to fly out a fifth critical patient.

We utilized our local air ambulance companies, Northwest Medstar and Airlift Northwest. Both helicopters were able to navigate temporary flight restrictions, weather and smoke, and make their way into either Twisp City Airport or Methow Valley State Airport to receive patients who required air transport. Pilots braved heavy smoke and landed in areas where they could find an opening, flying at night with no power and fire on all sides. Citing the eerie scope of this massive wildfire, one medical flight crew member commented that it was like descending into hell.

Outside Help
Snohomish County Fire District 1 personnel, who had recently completed operations at the devastating Oso mudslide disaster, made valuable recommendations based on what they’d learned in Oso. Okanogan Public Health (OPH) personnel arrived within the first five days–once the roads to the valley reopened–to assess the area and help with extended disaster operations. (For more on the Oso mudslide, see “Buried in Seconds: Oso mudslide in Snohomish County, Wash., impacts the community & first responders,” by Deb Crager, BS, EMT-P, in the September issue of JEMS.)

OPH personnel were taken to the fire camp where they interfaced with medical and safety officers to assure firefighter health and safety. These were key elements of coordination between OPH and the first responders at the Oso mudslide disaster, and prevented an incident within an incident.

We were also able to advise OPH officials about ways in which local EMS responders could expand their services under an emergency declaration. This allowed EMS personnel to be a “force multiplier” for OPH, used for surveillance and vaccination work in an austere environment. 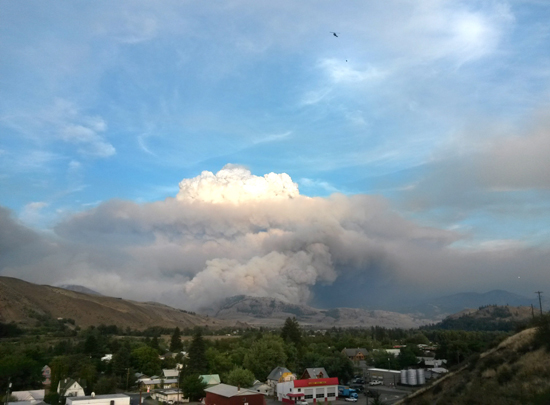 After the local roads opened again, the MASH operations quieted down. However, citizens traumatized by the continuing disaster started to stop by the Aero Methow Rescue Service station, so we made sure it was staffed at all times.

During the Oso mudslide, we had learned how to provide passive and active mental health response for citizens and providers alike. We contacted our colleagues in Oso to help and quickly developed a plan and met with local mental health workers. Because citizens were naturally stopping by the Aero Methow Rescue Service station, we decided to set up regular drop-in hours for people seeking stress resources. A counseling area was established and local mental health workers signed up to staff it each day.

In addition to citizens dropping in for help, we were requested to visit people at other locations who were still suffering from the trauma of fighting to save their home from the wildfire. EMS and mental health professionals conducted team visits to check in and talk with those people not close to town.

The Oso mudslide also established our connection to the Washington State Department of Agriculture (WSDA). In Oso, Maxwell oversaw the coordination of animal remains recovery and veterinary response. With all the contacts added to the Snohomish County Fire District 1 incident commander phones and computers, we were able to immediately connect OPH with the WSDA.

We continued to have critical EMS calls and the need to evacuate people throughout the protracted incident. These responses required a triage process outside our standard operations. Roads continued to be blocked without warning for long periods of time, which created the danger of not being able to transport a patient in a reasonable amount of time and also presented a chance that our limited number of ambulances wouldn’t be able to return to the Methow Valley. Due to these risks, the threshold for flying patient to hospitals in lieu of ground transport was lowered and aeromedical resource use was increased.

Conclusion
All agencies need to be prepared to manage multiple-casualty incidents and major incidents in their service area. This incident–occurring in a rural valley where patients and providers were cut off from hospitals, power and telephone/9-1-1 coverage–exhibited the importance of advanced planning and preparedness by rural EMS agencies. It also exhibited the values of mutual aid EMS and fire personnel willing to share their resources, expertise and experience with their neighbors.