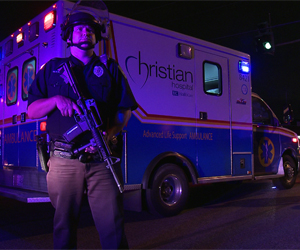 EMS providers and agencies attempt to prepare for almost anything, particularly large-scale events and mass casualty incidents (MCIs). But how do you prepare for standing by or responding to the warm or hot zones of rapidly escalating and moving riots and protests? You can prepare for auto crashes, shootings, heart attacks and even mass casualties, but large-scale civil disturbances introduce unusual and highly hazardous obstacles for EMS and fire agencies.

The Ferguson (Mo.) Fire Department (FFD) and Christian Hospital EMS (CHEMS) were confronted with these issues when riots broke out on the afternoon of Aug. 9 after Ferguson Police Officer Darren Wilson shot and killed Michael Brown outside the Canfield Green apartment complex. Brown, an 18-year-old male, was shot six times. Race soon became an underlying foundation for civil disturbances and peaceful protests that lasted three weeks.

Allegedly, Brown was walking in the middle of the street with a friend when Wilson pulled up alongside him and asked the pair to move to the sidewalk. A fight reportedly broke out between Brown and Wilson and initial reports indicated Brown punched Wilson in the face and wrestled for the officer’s gun.

Versions of the story vary, and there was no dash camera in the officer’s cruiser that could record or document the encounter, which reportedly occurred in and around the vehicle. According to a The New York Times story detailing Wilson’s testimony to a grand jury in St. Louis, Wilson’s gun was discharged two times in the police car during the struggle.

Another report says Brown ran and Wilson drew his weapon after getting out of his police car in an attempt to stop Brown. Some witness statements had Brown raising his arms to surrender while Wilson shot him.

Police reports indicated Brown turned back to attack Wilson after initially running away. Wilson feared for his life, so he continued to fire his weapon until the threat was neutralized.

The grand jury is still looking into the shooting, but hasn’t issued any findings or indictments yet. Regardless of what actually happened, the end result was almost three weeks of civil disobedience, looting and peaceful protests.

At the core of providing EMS response were FFD and CHEMS. Operating from two fire stations, FFD is the primary fire agency for the city of Ferguson. FFD does first response but not EMS transport–that service is contracted out to CHEMS.

CHEMS is a hospital-based EMS system that’s the 9-1-1 provider for eight different fire protection districts and municipalities in north St. Louis County, which holds a population of approximately 250,000 residents. With 22 ambulances and approximately 108 employees, CHEMS is the third-busiest 9-1-1 provider in Missouri, answering approximately 46,000 calls annually.

A CHEMS ambulance crew was transporting a patient nearby the apartment complex when it came across the crime scene. A paramedic crewmember got out to see if he could assist Brown, but realized after an assessment there was nothing he could do. The crew called for another EMS unit, waited until it arrived, and continued transporting the original patient.

Because of unrest at the scene, however, the second ambulance was ordered by the police to leave the scene and move to a staging area. The police then kept Brown’s body at the scene for approximately four hours while they conducted their investigation, which further agitated crowds as the word spread.

CHEMS Chief Chris Cebollero, NREMT-P, arrived some three hours after the initial shooting as events were escalating. He immediately realized the significance of the situation as the crowd grew to the ambulance staging area.

Using his years of experience, Cebollero emphasized the seriousness of the situation to the young EMS crew and supervisor who were already at the scene. He told them situational awareness was something that should be in the forefront of their thoughts.

Cebollero began looking for another staging area that would provide better safety from the angry crowd, as well as ingress and egress for the crews. According to Cebollero, “The challenge was, where do you set up an EMS staging area when the crowds kept growing and becoming more restless while holding signs that said, “˜Kill the police’ and, “˜Stop murdering us’?”

After the body was removed from the scene, the crowds grew in size and became more disobedient, and people began throwing rocks and bottles at ambulances. In some cases, the crowds intentionally blocked fire engines and ambulances from getting to scenes.

The police came out in force the first night and formed lines in an attempt to control the crowds. The CHEMS ambulances were within 10—15 feet of these police lines. At this point, Cebollero feared for the safety of his crews and decided to move them to another location.

There were some injuries to police officers and demonstrators the first night. The EMS response to these individuals took about 30 minutes, since it was unsafe to send ambulances into the hot zone areas. Task force protection was required, but the police were busy trying to manage the crowds.

The second night things escalated, and destruction included the burning and looting of several buildings. Fire and EMS crews could see buildings burning from their vantage point, but couldn’t respond because fear of violence against them from the crowds was too high.

Adding to the confusion during the first four days was the issue of which law enforcement agency was in charge of the operation. It was technically the Ferguson Police Department’s municipality, but St. Louis County Police took over the investigation and crowd control because it’s a much larger agency.
Missouri Governor Jay Nixon also added to the confusion by sending the Missouri State Highway Patrol in to take control. Much of this information wasn’t getting back to fire and EMS, and they couldn’t develop tactical plans.

Initially, there was no unified command system in place and planning meetings didn’t occur. Interoperability between police, fire and EMS was a challenge because the ability to communicate over radios between was problematic, according to Cebollero.

Ray Kemp, an EMS journalist who was on scene most nights, said, “I was getting most of the information that EMS needed for their operations by following the protestors on Twitter as they tweeted out different messages on what streets they were blocking or other activity.”

After several consecutive nights of looting and structural fires, it was apparent civil disturbances weren’t stopping, so a joint command post was established.
As the situation escalated, CHEMS began staffing five extra ambulances each night for about eight days. All five of these ambulances were staged at the joint command post and deployed as needed.

Even though most of the violent activity occurred at night, there were still areas where CHEMS wouldn’t send an ambulance during the day–even on 9-1-1 calls–because of concern for the safety of EMS crews.

CHEMS did have some “force protection,” whereby police officers were assigned to respond with ambulances. However, other law enforcement commitments meant this wasn’t always available, and when it wasn’t, Cebollero had to personally make the tough decision whether to send an ambulance.

As Cebollero describes it, “We had rocks and bottles being thrown all over the area, as well as several gunshots [being fired], and my goal was to make sure our personnel went home at the end of their shift.”

Cebollero attempted to acquire body armor to further protect his personnel, but to his dismay discovered it would take six weeks or more for the vital equipment to arrive. Thankfully the St. Louis Police Academy came to his aid and loaned him 30 pieces of body armor for CHEMS personnel to wear.

Despite the added protection, some areas were just too violent to expose EMS personnel to. In several instances, CHEMS wouldn’t respond to some of the warm zones and had patients brought to the command post where EMS and fire were staged. Ironically, 9-1-1 calls dropped approximately 20% during the 19-day period of unrest– not only in Ferguson, but in the areas surrounding Ferguson.

Things became so dangerous that, on at least two occasions, protestors began marching toward the command post with the potential of overrunning it. Police fired tear gas in an attempt to disperse the crowds, but in the event the crowd was successful, law enforcement officers gave EMS personnel batons and instructed them to “do the best they could to defend themselves.” Thankfully, the police were able to stave off the crowd.

Each morning, CHEMS leaders would hold morning breakfast briefings with the EMS crews, but soon became concerned about the stress the crews were under and their mental well-being. To assist them, mental health counselors were brought in to these morning sessions.

Mutual aid from other surrounding fire districts and municipalities didn’t occur until about the ninth or tenth day.

Cebollero said the surreal moment came when he saw President Barack Obama talking on television about Ferguson. “Here’s a guy who talks about the economy, terrorists and other things, and now he was talking about Ferguson,” Cebollero said. It was at this point where the realization of how big this event was became apparent.

At the end of the initial 19-day period in Ferguson, CHEMS had transported approximately 70 patients. The medical nature of the complaints ranged from gunshot and rubber bullet wounds, stabbings, and hyperventilation to heat exhaustion.

As sensationalized as this event was, Cebollero fears this will become the norm when shootings of this nature occur. He believes EMS personnel should be better prepared on situational awareness issues and that they should perform practice drills well in advance of such events.