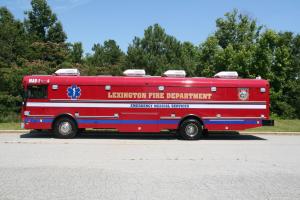 Shortly after 3 a.m. on March 27, the Lexington (Ky.) Fire Department (LFD) was dispatched to a reported multi-vehicle crash (MVC) on northbound I-75 at the eastbound I-64 overpass. That evening, a brief snowfall occurred that immediately melted, making the roads wet. The temperatures then dropped, causing the bridges to freeze. Others crashes had already occurred earlier in the day, so LFD units weren’t surprised when they were dispatched to an MVC on I-75.

The initial response on the call was Engine 8 and Ambulance 3. As units were responding, other calls came in to fire control stating that multiple vehicles were involved. Engine 8 arrived on scene and found approximately five tractor trailers and nine passenger vehicles involved.

One SUV went through the guardrail and flipped four times before coming to rest. Fortunately, the occupants didn’t have life threatening injuries. Another car left the bridge and ended up on the underpass of I-64 heading east. Seeing the number of vehicles involved, Engine 8 immediately requested additional units.

By the time the incident was over, 25 patients and four family members were transported to area hospitals. Most had to be immobilized, and two had to extricated from their vehicles. Because none of the injuries were considered serious, all 25 patients were triaged as green.

At first glance, this may seem like a somewhat simple incident. However, a review of this mass casualty incident (MCI) highlights some unique operational aspects, as well as an innovative training tool LFD uses to train its personnel.

Challenges
The biggest challenge was the hazardous roadway condition created by the flash freeze. Ice was so widespread and slippery that it was hard to even work and walk on the bridges. Access was another challenge. The five tractor trailers were entangled, and some cars were between the trucks or pinned between trucks and the guardrails.

Captain Les Fryman arrived and established a Medical Group to oversee the operation. Initial triage was performed by Rescue 1 personnel. LFD EMS providers typically use the simple triage and rapid treatment triage system. Although triage was performed, tags weren’t used. The only initial treatment performed was assessment and immobilization.

Because ambulances were already on-scene or arriving, patients were quickly placed into ambulances to keep them warm. As additional non-transport units arrived, they were assigned to assist with triage, extrication and immobilization.

Fryman had fire control call all the hospitals in the area to ascertain how many patients each could initially receive and to allow them time to prepare. No more than five patients were initially transported to each hospital. LFD tracked patients through interaction with Fryman and the ambulance crews. Fryman also had access in his vehicle to the patient care reports and could monitor where patients were sent and their injuries. This was very valuable in obtaining follow-ups on patients or if family members called seeking information.

A staging area was established farther down the interstate at a location where units could cross from one side of the highway to the other. A ladder, engine and ambulance were staged to respond to other crashes in the area if they occurred. Something we can learn from this is that although we often think of establishing staging in a parking lot or at an entrance or exit ramp to an interstate, we can use the roadway itself for staging as long as there’s clear ingress and egress.

Ambulance Bus
One unique aspect of this operation was the use of a large medical ambulance bus (MAB), which LFD placed in service August 2010. It can transport 20 patients on backboards or a mix of patients on backboards and seats. As the incident progressed, it was decided that because other incidents would likely occur around the city–and because most of the remaining patients were ambulatory or just wanted to be examined at the hospital–the MAB would be useful. It could eliminate the need to call additional ambulances to the scene.

The MAB responded with a driver and a load master, both of whom are EMT certified. EMS providers from Rescue 1 and Engine 8 were assigned to load the bus and provide patient care. When the MAB arrived, eight patients were loaded onto the bus for transport to a hospital. Rescue 1 and Engine 8 followed the MAB to the hospital to pick up their personnel to return to service.

EMS agencies that have similar ambulance buses in their vicinity should strongly consider calling early for this resource. A common strategy is to use it to transport yellow and green patients rather than red patients. By using the bus to transport patients with less-serious injuries to more distant hospitals, closer hospitals are free to focus their attention on more seriously injured patients.

Unique Training Tool
A unique training tool that Fryman created is a “Teddy Bear Triage” program used to teach and review triage. More than 60 teddy bears, each with its own signs and symptoms card around its neck, are scattered everywhere. EMS providers have to locate and triage the bears. This allows for training the in-quarters crews on MCI management during their daily or weekly training.

It’s worked well so far, and they plan to continue it. This is a simple, inexpensive method for making MCI training interesting that other EMS agencies can copy. And to save money on setting up such a system, multiple agencies can share the cost of the bears and then share the system.

More Lessons Learned
On the next shift after the crash, a post-incident critique was completed with all units involved participating. This allowed LFD personnel to discuss what worked and what didn’t on scene. This is an important part of mass casualty operations that shouldn’t be overlooked.

Command personnel should ensure such sessions aren’t used only to commend the crews for what went right, but also used to identify areas for improvement. LFD used the session for both, and what they identified can help us be better prepared as well. One success in particular related to communications. A separate talk group was assigned for use at the incident, and this worked well.

However, LFD noted some concerns. Personnel felt more training on MCI operations and triage would be useful. Also, LFD doesn’t have a formal MCI response plan. Now, several personnel within the division are putting together a detailed plan, which on-scene commanders can follow at future MCIs.

The critique also identified ways to enhance the operations of the ambulance bus. They identified a need for car seats to secure small children in the MAB. Another concern was the need to train more personnel on the use of the MAB and how to drive and load it. These topics will be included in future training sessions.

Conclusion
Thanks to homeland security grants, specialized equipment is available in many areas that can be used for an MCI. Scene commanders, as well as EMS providers, need to be alert for opportunities to make use of such equipment. Also, we can follow LFD’s example, developing ways to make our MCI-related trainings more interesting.