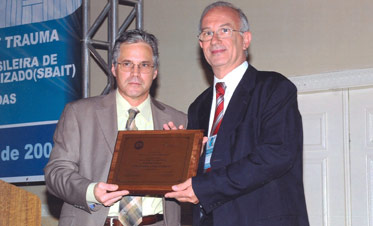 I had the pleasure of speaking at the 21st Panamerican Trauma Congress in Campinas, Brazil, in November. I’ve been a member of the Panamerican Trauma Society for several years and have lectured at the congress for more than 10 years. As I’ve said before, it’s one of the most dynamic, informative meetings I’ve attended over the course of my career.

This year, there were 1,600 doctors, nurses and EMS personnel from more than 20 countries in attendance. I learned a great deal from this diverse crowd of trauma professionals and the broad range of topics they lectured on.

Options
Currently, various methods are used for treatment of pelvic fractures in the field. Some advocate using sheets, pelvic binders, vacuum/bean bag splints and even the pneumatic anti-shock garment (PASG). Depending on who you’re talking to, you may hear “evidence” supporting any of these options. The truth is there’s no evidence that any, including simply immobilizing the patient with blankets and the backboard, work better than the next.

The Challenges
We face two challenges when treating pelvic fractures in the field: controlling the bleeding and moving the patient. At the very least, it’s painful to move them and, at worst, unstable fractures can be exacerbated by movement, increasing the bleeding.

In the hospital, if the fracture type permits, as in an “open book” fracture, the pelvic will be externally supported and compressed into a closed position. In the immediate presentation, ED personnel have resorted to tying a sheet around the pelvis and, in recent years, have used pelvic binders. These may be replaced by external fixation devices. Ultimately, these patients will go to the cath lab to be embolized to control the bleeding, and a few may require surgery.

Research
If you search the literature on this topic, you’ll find many in-hospital studies but only a few prehospital. For the most part, outcomes are measured for patients in which a pelvic fracture protocol was used. In these studies, better outcomes were reported, but it’s difficult to determine the prehospital role in improving these patients’ outcomes.

I’m sure some will shudder when I say this, but at least two studies seem to support the use of PASG to improve outcomes. The first one, by Dr. LM Flint and published in theAnnals of Surgeryin 1979, actually used G-suits. The researchers reported “significant reductions in overall mortality and the frequency of shock related deaths.” In another study by Flint in 1999, the PASG suit resulted in a similar positive outcome. The idea is that the suit compresses the pelvic compartment, holding the broken pelvis closed and limiting the size of the space the pelvis can bleed into.

The PASG has fallen out of favor over the years. But it would seem that at least in these studies, PASG was useful. As far as I know, this is the set of studies that many prehospital protocols use when calling for the use of PASG.

As for the new pelvic binder devices, no available science shows a benefit to patients. However, there are some radiographic studies of cadavers. In these studies, the pelvis was broken in the cadaver and then x-rays were taken before and after the application of the binder. The manufacturer states that the fractures were effectively closed using the device. There are also studies that show the effectiveness of using sheets and bean bag/vacuum splints.

What to do?
For now, no evidence clearly supports the use of one over the other. (Some have argued that the PASG studies are the only ones that showed improved outcomes.) Given that, we should focus on the objectives of controlling bleeding and stabilizing the pelvis in order to move the patient. Scoop stretchers, spine boards, vacuum splints, binders, and sheets and blankets would all seem to do the job in the hands of skilled, attentive prehospital professionals. I hope some new science on this is headed our way.

Giving Thanks
This time of year, I usually give thanks for the blessings I’ve had professionally and personally over the years. First, let me thankJEMSfor giving me a place to write and “correspond” with my partners in trauma all over the world. It’s humbling when readers come up to me after my lectures and at meetings and talk about my columns, which they’ve read here. Second, thanks to all of you who have employed me over the years: The American College of Surgeons, Chicago Heights Fire Department, Good Samaritan Hospital and St. James Hospital. Not only have you all given me a place to do the work that I love, but you all gave me the flexibility to grow professionally and work in a variety of environments all over the world. Next, to all of you who take the time to read my columns and books, listen to my lectures or participate in courses, you’ve given me a life’s work that I’m proud and humbled to be able to do. Finally, and most importantly, I’d like to thank my wife, Kathy. Her love, patience and sacrifice have given me 32 years of marriage and a beautiful, growing family.

Read about Will Chapleau s experiences at the 2007 Panamerican Trauma Congress.