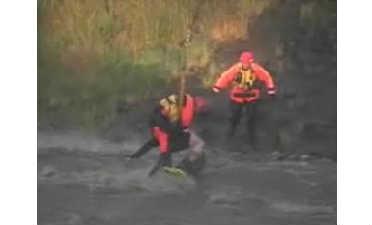 A Contra Costa County firefighter and California Highway Patrol helicopter crew risked their lives to save a woman from a Walnut Creek waterway after a car carrying her, her husband and her son plunged into the rain-swollen creek. The son, 40-year-old Tim Hogan of San Diego, died Sunday evening after the car he was driving crashed through a fence just east of the Broadway Plaza shopping center and landed upside down in the waterway called Walnut Creek. Hogan’s father, James Hogan, 79, of Walnut Creek, a 16-year volunteer with the Contra Costa County sheriff’s office, was still missing Monday and was presumed dead. Janet Hogan, 75, survived, thanks to the efforts of county fire engineer Dave Manzeck and the CHP helicopter crew that dangled him over the creek so he could pluck the unconscious woman from the 50-degree water.

Lost control of car Tim Hogan, who previously lived in Walnut Creek, lost control of his parents’ Honda Accord on Mount Diablo Boulevard where it turns into Walker Avenue near San Miguel Drive about 6:15 p.m. Sunday, authorities said. The car crashed through a fence and flipped onto its roof in the creek, then drifted several hundred feet north. Tim Hogan’s body was found in the Accord. An autopsy was conducted Monday, but the cause of his death was not determined pending the results of toxicology tests, said Jimmy Lee, a sheriff’s spokesman. Hogan’s parents managed to get out of the car but were swept downstream. CHP flight Officer and paramedic Shaun Bouyea and pilot Officer Jason Hertzel responded to the scene in the agency’s Eurocopter from the Napa County Airport. They soon received reports that a woman was floating down the creek, said Bouyea, a 14-year CHP veteran. The crew spotted James and Janet Hogan separately in the water as the helicopter was about 200 feet above the creek and began efforts to save the woman, Bouyea said.

Barely afloat “We observed her treading water, just barely staying above the water,” Bouyea said Monday. “The water was moving at a pretty rapid rate, I’d say about 15 mph.” Bystanders and rescue workers were running along the creek. Firefighters threw ropes to Janet Hogan, but she was too weak and couldn’t grab it as she floated past, Bouyea said. She soon went over a 6-foot waterfall. “She went under and bobbed up three or four times. There was no way that we were able to get her,” Bouyea said. A short time later, Manzeck, an engineer with the Contra Costa County Fire Protection District who is trained as a rescue swimmer, motioned at the helicopter from the creek bank. Manzeck used hand signals to get the crew to lower a hoist cable on which a device known as a clench collar was attached. Manzeck climbed aboard, and Hertzel, a 10-year CHP veteran, maneuvered the helicopter to just 30 feet over where Janet Hogan was floating.

‘Close to Jesus’ It was perilous for Manzeck – he was being pummeled by fast-moving debris in the churning current, including at least one log and, at one point, he was submerged for about five seconds. “I definitely got close to Jesus on that one,” Manzeck recalled Monday. Finally, near Bancroft Road and Treat Boulevard – several miles north of where the car had gone into the water – Manzeck managed to pluck Hogan from the creek after she became wedged on a rock. By then, her head had been underwater for at least 15 seconds and she had lost consciousness. What Manzeck did, said Bouyea, went “above and beyond what normal rescuers do. That was the most heroic rescue I’ve seen.” Manzeck, in turn, credited his fellow firefighters and the skills of the CHP crew. “I just ended up being the guy on the other end,” said the fire engineer, a six-year veteran who usually works in Pittsburg. “Just doing the job. I think anybody else would have done the same thing.”

In same hospital The helicopter flew Janet Hogan to the creek bank, where paramedics revived her and took her to John Muir Medical Center. She ended up in a hospital room three doors down from Manzeck, who suffered a dislocated shoulder and a torn ligament during the rescue. On Sunday night, she summoned Manzeck to her room. “I got a little kiss on the cheek,” Manzeck said. “It’s pretty embarrassing, but she called me an angel.” Manzeck said luck had nothing to do with her rescue. “I call it not luck, because I’m a Christian, so I don’t believe in the luck,” he said. “But I definitely felt that it was a higher power and it worked out real well.”