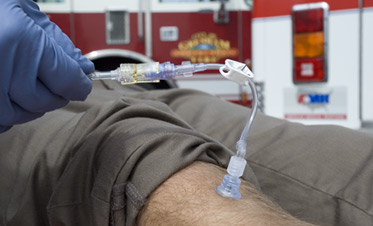 Editor_s note:”ž The following article is a companion piece Ë™The Stories behind the Numbers: IO Infusion in Prehospital Emergency Practice,à“ in the JEMS supplement Ë™State of the Science,à“ which was published in October 2007 JEMS.

Investigators have studied the use of IO devices by emergency medical professionals under various conditions and reported quantitative results.

In a 250-patient multicenter study, Davidoff and colleagues examined the ability of paramedics, nurses and emergency physicians to use the powered IO insertion device (EZ-IO) in actual practice. The emergency care providers were successful in inserting the IO needle 97% of the time (242 of 250 cases). Anecdotal comments about the device were largely positive.

Miller and colleagues examined the use of a sternal IO access device (FAST1, Pyng Medical Corporation, British Columbia, Canada) on simulated patients by students studying to be EMT Basics (EMT-Bs). The students successfully placed the device on the first attempt 55% of the time (95% CI: 82% to 100%).

Guyette and colleagues examined the ability of EMT-Bs to perform cardiac resuscitation procedures, which included inserting the EZ-IO. The EMT-Bs were able to correctly place the IO device 94% of the time (95% CI: 73% to 100%). The median time to needle deployment was 27.5 seconds (95% CI: 24% to 31%). The students found the device easy to use and felt confident they could use the device in the field.

Findlay et al reported a study in which the FAST-1 was evaluated by paramedics for safety, speed of insertion and ease of use with minimal training in a simulated prehospital scenario. Ten experienced paramedics found the time from opening the package to fluid flow ranged from 52 to 127 seconds; and concluded that placement of the F.A.S.T. 1 Ë™àšis fast, accurate, and easy to use.à“

Frascone and associates reported consecutive field trials of the FAST1 and the EZ-IO. Results showed the overall success rate for the FAST1 was 72% compared to 87% for the EZ-IO, a significant difference (p=.009). The time to infusion for EZ-IO was also faster (p=.02). There was no difference in provider comfort or provider assessed device performance between the two devices.

All these studies found that emergency medical providers and students were able to quickly and accurately place various IO access devices.