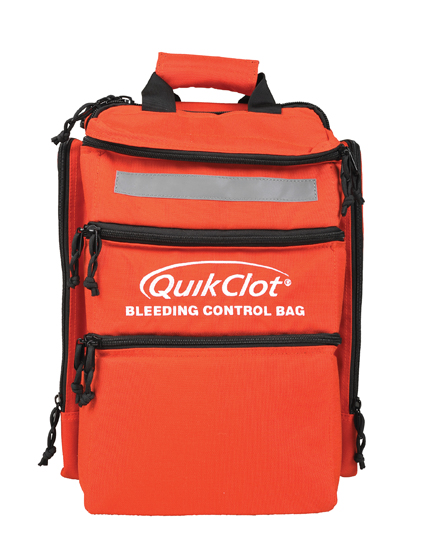 According to the Office of Homeland Security, uncontrolled bleeding injuries can result from both manmade and natural disasters. This can be from a planned attack or resulting from everyday accidents or natural disasters. Regardless of the reason, if someone is severely bleeding, the individual could possibly die before emergency medical responders can arrive.

“With the unfortunate increase in active shooter and other mass casualty events across the nation, the Mid-South Emergency Coalition recognizes the importance of equipping medical staff with basic tools and information on the simple steps they can take in the event of a bleeding emergency, we can help save lives,” said Ashton Anderson, Regional Hospital Coordinator for the Public Health Emergency Preparedness Program of the Shelby County Health Department. “Just as it has been done with the use of automatic external defibrillators, Coalition members believe the installation of QuikClot Bleeding Control Bags will improve capabilities and can improve survival rates of those injured in such events.”

The safety of Shelby County school students and staff also benefit from having hemorrhage control at arms-reach, according to the Hartford Consensus guidelines.

“Shelby County Schools is proud to be the first school district in Tennessee to utilize QuikClot to support School Resource Officers,” said Dorsey Hopson, Superintendent. “Now, more than ever, it is important that we remain highly proactive in regards to the safety of our students and staff. In addition to the intensive, ongoing training our officers receive, the utilization of QuikClot will help arm them with one more potentially life-saving resource.

“The region-wide deployment of hemorrhage control bags and kits ensures that there is a continuum of coverage when it comes to saving lives when seconds count,” said Z-Medica’s President and CEO Stephen J. Fanning. “Memphis and surrounding Shelby County is the first major region in the country to comply with the life-saving guidelines as spelled out in the Hartford Consensus.”

Over 60 representatives made up from all the Memphis-area hospitals and Shelby County School Safety Officers are receiving their initial training. Over 200 QuikClot Bleeding Control Bags, QuikClot Bleeding Control Kits and QuikClot Belt Trauma Kits are being distributed throughout Shelby County between Coalition members and the schools. The purchase was made possible through a grant provided by (ASPR) Assistant Secretary for Preparedness and Response via the (HPP) Hospital Preparedness Program (HPP) grant and the Safe Schools Grant.

About the Hartford Consensus

The Joint Committee to Create a National Policy to Enhance Survivability from Intentional Mass-Casualty and Active Shooter Events, founded by the American College of Surgeons, developed the Hartford Consensus, which focuses on implementation of strategies for effective hemorrhage control. Stemming from the Sandy Hook Elementary School shooting, the overarching principle of the Hartford Consensus is that in intentional mass-casualty and active shooter events, no one should die from uncontrolled bleeding. Recent events have shown that, despite the lessons learned from more than 6,800 U.S. combat fatalities over the last 13 years, opportunities exist to improve the control of external hemorrhage in the civilian sector. These opportunities exist in the form of interventions that should be performed by immediate responders and professional first responders, such as law enforcement officers, emergency medical technicians (EMTs), paramedics, and firefighters (EMS/fire/rescue), at the scene of the incident.

The Mid-South Emergency Planning Coalition represents a partnership between eighteen area hospitals across a two state, four county region, the Shelby County Health Department’s Public Health Emergency Preparedness Program, and local Fire/EMS. The Coalition’s primary function is to work as a regional unit to create and implement effective frameworks to respond to local emergency incidents and public health issues that affect the residents of Shelby, Tipton, and Lauderdale counties in Tennessee and DeSoto County, Mississippi. To achieve this, the Coalition uses grant funds to identify healthcare emergency preparedness needs for the community and sets goals in which to meet those needs. As partners, the Coalition members work together on community hazard assessments, drills, exercises, resource sharing, and acquiring equipment and technology that can better serve them as healthcare providers and emergency responders.

Z-Medica, LLC is a medical device company founded in 2002 that develops fast acting, easy to use hemostatic products that stop bleeding wherever it occurs, making it possible to save lives and improve patient outcomes. Based on tests conducted by the Naval Medical Research Center and the U.S. Army Institute for Surgical Research, the Committee on Tactical Combat Casualty Care (CoTCCC) chose QuikClot Combat Gauze® as the hemostatic dressing of choice on the battlefield for compressible hemorrhage not amenable to tourniquet use or as an adjunct to tourniquet removal if evacuation time is anticipated to be longer than 2 hours.

QuikClot® products are developed and manufactured in the United States. Z-Medica, LLC is a privately-held company based in Wallingford, CT. For more information, visit www.quikclot.com and www.Z-Medica.com