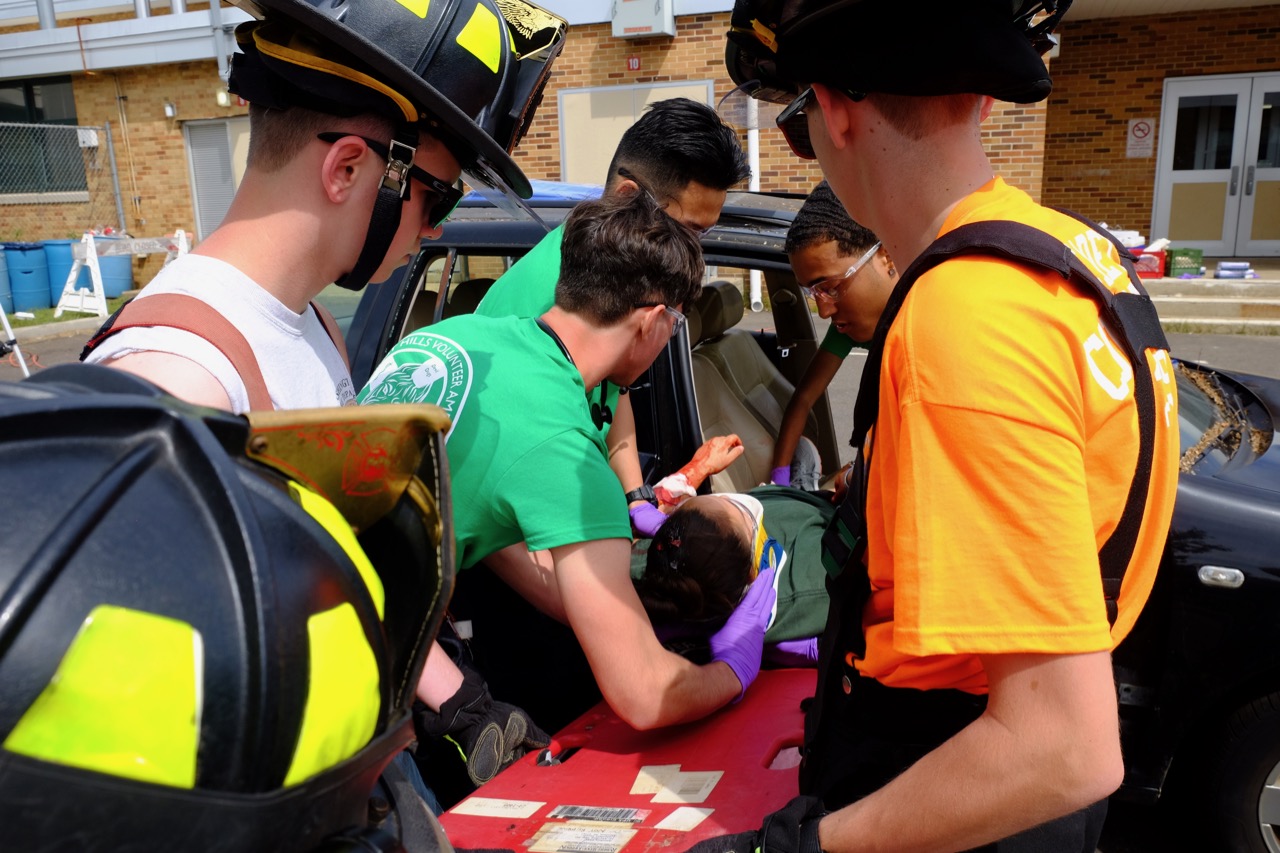 Keansburg Fire Department EMS won in the advanced category, while Forest Hills (Team A) took the title in the basic skills competition.

“This event is so awesome for these kids,” said David Goodwin, the cadet advisor for Keansburg Fire Department EMS. “It really challenges them so they can prove to themselves that more or less that they can handle the skills that they’re being taught. And it’s also just bringing camaraderie between each of the groups. When guys get called out, everyone cheers them on, “˜Good luck, good luck.’ Just the interaction between the kids and seeing that is great.”

Forty-one teams representing emergency medical service providers throughout the tristate region participated in the competition, which consisted of a series of skills competitions to test their basic and advanced capabilities. Competitors participated in skill events such as taking a patient’s vital signs, handling cardiac arrests, CPR, splinting, patient assessment and removing patients from motor vehicle wrecks.

Some of the teams were participating for the first time. And nearly 50 competitors arrived the night before and camped out in large tents.

“Some of the students are surprising. Their knowledge, how they handle themselves, how some of them are taking a leadership role,” said Ken Krohe, chief of Keyport First Aid, who heads up the competition.

Krohe said he was also happy to see the competitors interacting with each other and happy about participating in the competition. “Listening to the cheers before they go out, when they’re announced and just seeing the smiles on their faces when they come out,” Krohe said.

“They’re getting not only the joy of fellowship with the other people but learning to put their skills into place in a competitive atmosphere,” Phillips said.

“They’re having fun,” Phillips said, “and just learning more about EMS through other people and this experience.”

When not competing, competitors were able to explore assets and experience equipment from the New Jersey EMS Task Force and the Monmouth County Sheriff’s Office.

The competition was open to youth members of emergency services organizations and was sponsored by Keyport First Aid and the EMS Council of New Jersey.

“It is so wonderful to see such a great turnout for this event. I am so proud of every one of you,” NJ EMS Council President Barbara Platt told attendees.

“It has grown just into this big event and it’s something our kids look forward to,” said Goodwin, who oversees the program with fellow Keansburg members Stacy Smallze, Anthony Cappiello, Jackie Huynh, James Hynes, Dan Lindberg and Alyssa Christiana.

“They enjoy coming here and we enjoy bringing them to it,” Goodwin said,And not just the competition side of it, but the simulation vehicles and letting them do things that they wouldn’t normally get to do back at the squad necessarily.”

That said, the competition can be just as challenging for the adults watching their competitors go through the skills tests, Goodwin said.

“It’s nerve wracking on the instructor side, because you see them sometimes struggling in a certain spot where they know they need to do something, but they can’t think of it,” Goodwin said. “And you want so bad to just be like that’s it and tell them, and you can’t do that.”

Already teams are planning to return for next year’s events.

That’s satisfying for Krohe and the large team of volunteers who come together to plan and stage the competition. He also said it was nice seeing some of the same advisors and cadets return year after year because that tells him they think it’s a worthwhile event.

“Hopefully, this is the future of EMS,” Krohe said looking at the various teams before him at the competition. “Many will be some sort of EMS provider. Whether it’s a paramedic, an EMT, some of these kids are going to be doctors, nurses, so hopefully this will help their career along.”