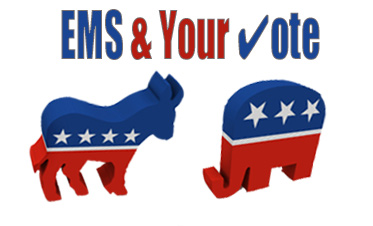 Last month, I mentioned my experiences in the shadow of the Democratic National Committee Convention held in late August in Denver. In that article, I indicated I would evaluate the presidential candidates’ health plans, hopefully with some analysis of their effect on EMS. As health-care workers, it’s important that we have an understanding of the positions of Senators Barack Obama and John McCain with respect to the health-care mess we find ourselves in. Most people accept the claim that health-care costs currently consume about 16% of the gross domestic product while leaving 47 million uninsured and 25 million underinsured.

So, after a bit of research over the past month, I’ve come up with information that may be helpful as we enter the homestretch leading up to the election.

Unfortunately, neither McCain nor Obama mention EMS specifically, and I haven’t been able to find other analyses of their impact on EMS. So, I’ve taken the liberty of making some extrapolations with regard to the prehospital world based on my perception of the plans.

In reality, the financial collapse on Wall Street in recent days, as well as the $700 billion bailout bill that has been passed, will likely delay any imminent overhaul of health care. But, at some time in the future, we’ll probably see the winning candidate attempt to move forward with some form of their vision for health-care funding. Here are two lists from The New England Journal of Medicine that go over the basics of McCain and Obama’s plans:

Obama
1. Pay-or-play employer mandate requiring businesses to either offer insurance to workers or pay a tax. (“Very small” businesses would be exempt.)

2. Create a new national health plan similar to Medicare for the uninsured and small businesses.

3. Establish a new national health insurance exchange that would offer insurance options for the uninsured and small businesses.

4. Mandate insurance for all children.

6. Expand coverage financed through a payroll tax. Tax cuts currently in place for families making more than $250,000 a year will be allowed to expire. Additional funds will be expected to be realized from savings in utilizing electronic medical records, disease management and other reforms.

7. Regulate all private insurance plans to end risk rating based on health status.

8. Establish a federal reinsurance program to insure businesses against the costs of workers’ expensive medical episodes.

2. Provide refundable tax credits ($2,500 per individual, $5,000 per family) for all persons obtaining private health insurance using revenues generated from eliminating the tax exclusion. Assuming the insurance costs less than the amount of the credit, the remaining funds would be deposited in a health savings account.

3. Create guaranteed access plans to provide insurance pool for people who are medically uninsurable on the individual market.

6. Reform Medicare — move from fee-for-service reimbursement to bundled payments for episodes of care and to pay on the basis of outcomes.

I was unable to find a reference indicating how much the plan might cost, but since it is primarily market based costs would likely be substantially less than Obama’s plan.

Summary
Obama’s plan is similar to the current Massachusetts State Insurance Plan. Created in 2006, it’s essentially an employer-based insurance program. However, unlike the Massachusetts Plan, the Obama plan has no mandate for individuals to get insurance, and they do not have to pay a penalty if they don’t. Massachusetts requires insurance for all residents and currently about 95% of them have some plan. Obama’s plan would likely fall far short of this percentage nationally.

Obama’s proposal would likely lack reliable cost control mechanisms.(2) It would allocate another $10 billion annually for five years ($50 billion total), in addition to the estimated annual cost, to help physicians and other providers adopt Health Information Technology (HIT) (computerized charting and other record keeping) into their practices.(3)

McCain’s plan puts the onus for insurance on the individual and the marketplace — away from the employer. It envisions private insurers competing with each other for the business of potential customers by driving hard bargains with hospitals, physicians and other providers.(1) If workers do receive a health insurance benefit from the employer, it would be taxable (which is currently not the case).

Some think that the net effect of this plan would lead to younger workers rejecting the employer-paid benefit and seeking cheaper, high deductible individual plans or going without insurance altogether. This situation would leave a stable of older, insured workers likely requiring greater medical care — driving up the employer’s insurance premiums. Businesses could ultimately discontinue all insurance coverage.(2) Many lower income Americans would probably still not be able to afford insurance and thus would not carry it.(4)

Even though McCain Advisor John Goodman opined last August that “technically no one in the United States is uninsured because everyone has access to the emergency room,” that particular strategy is not mentioned in the formal McCain plan.(5) McCain also wants to promote provider use of HIT but has no specific plan to do this.(5)

The Plans & EMS
On the surface, Obama’s plan would probably most benefit EMS and emergency medicine. His proposal would tap more government funding to pay for health coverage and likely come closer than McCain’s plan to “universal coverage.” As a byproduct of more universal coverage, a significantly greater number of those currently uninsured and underinsured (who comprise a substantial percentage of EMS patients) would have to be, at least, partially able to pay for their care.

But there are some substantial downsides that may directly and indirectly affect EMS. The proposal for employers to “play or pay” — that is, provide health insurance or pay a tax — may adversely affect small businesses’ cost containment, thereby reducing their ability to thrive. Moreover, some of these small businesses may, in fact, be ambulance companies with a negative impact on these agencies’ bottom-line; meaning potentially fewer employment opportunities for EMS providers.

Overall, the cost associated with the Obama plan is huge. His campaign estimates $50 65 billion per year. Others suggest that the price tag might be closer to $100 billion per year. Neither of these figures includes his proposed $50 billion contribution to HIT. Therefore, the potential effect on the U.S. economy associated with the expenditure of these dollars would be substantial.

And, as I mentioned above, a strong comparison can be made between the Obama proposal and the Massachusetts legislative mandated universal plan. Despite the implementation of the Massachusetts plan, not everyone in the state is insured. However, substantially more residents are now covered than before.

The problem is that the number of health-care providers hasn’t increased in that state. This means the demand for services has gone up without a corresponding increase in facilities to care for them. The wait time for primary care visits has ballooned to between four to 10 months.(6) Massachusetts is trying to identify ways to accelerate the training of primary care physicians and physician extenders, but realizes any positive change will take years. Access is still a critical issue.

Since access to providers hasn’t increased in Massachusetts, one could postulate that a similar situation would result nationally with Obama’s plan. Consider that baby boomers are now at an age where their health-care consumption will escalate. These factors will likely mean an even greater emphasis on emergency department (ED) care and EMS. The potential for greater numbers of ED diversions and delays in offloading patients must be considered.

McCain’s plan relies more on the free market than government and, as such, would likely be cheaper than Obama’s. Additionally, there isn’t much detail as to how McCain’s plan would be implemented. Given the reliance on the market, it’s probable the numbers of insured will not increase as much as in the Obama offering. Therefore, EMS will likely not see as substantial a change in reimbursement.

Access will still be a problem and the realities of the aging population health care requirements will plague a McCain administration every bit as much as an Obama one.

Conclusion
In my opinion, both the Obama and McCain plans are severely lacking. I’m as frustrated as anyone with our current system, and I agree that something must be done. But that doesn’t mean that just anything must be done. Both proposals are surprising in what they don’t address.

Our health-care problem is multi-faceted. But, at its simplest core, the health-care mess relates to overspending. In any responsible household, when finances are reduced or absent, the cash outlay or expenditures are cut back. In effect, we tighten the belt. This is not a philosophy apparent in these presidential plans, nor is it true in today’s health care.

In the health-care world, everyone expects quality. “Expect” isn’t even the right word. We demand the best. We want “Rolls Royce care,” while paying “Toyota dollars” or no dollars. Meanwhile, we continue to seek what we think is the best training, the finest equipment and the most luxurious hotel-like hospitals. We engage in competition driven by envy and fear of fiefdom loss. We support a medical liability industry second to none and, consequently, we pay the biggest malpractice awards whether frivolous or not. We’re victimized by purposely inefficient and evasive payers. We’re overregulated and micromanaged by government and other quasi-oversight organizations. We prolong those at the end of their lives who would prefer to die. And as a result of all of this, we spend billions — much of it unnecessary.

We emphasize specialty care and neglect primary care — and we can’t keep up with the demand for either. We graduate far too few nurses with no alternative plan.

To really reform health care, we all need to be willing to settle for something less than what we have. And that is a very bitter pill for us, and this nation, to swallow.

Who needs to expect less? Hospitals, doctors, nurses, insurance companies, lawyers, the government and EMS. And let’s not forget … patients need to expect something less too.

Until the presidential candidates and other political leaders confront these realities, their health-care proposals are wallflowers at a middle school dance.

We, undoubtedly, face a crisis in providing care in the current model. The numbers of patients will only escalate, nearly exponentially, in the future. If we continue with the approach we have today in health care, it will implode. The presidential plans don’t begin to address the issues. It will take real leadership, coupled with sacrifice, to make the necessary changes.