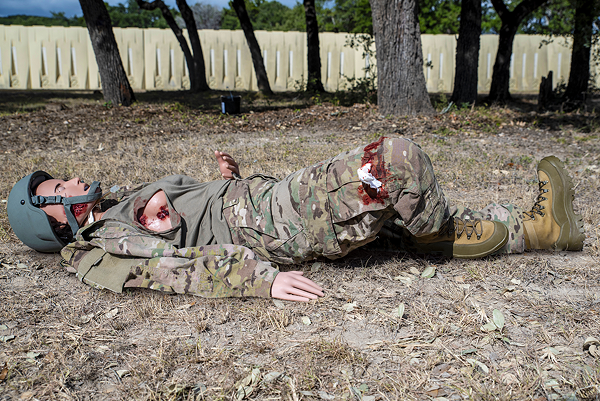 Anatomically accurate and ultra-lifelike, the TCCS Female features realistic wound patterns that simulate traumatic injuries from an IED explosion, blunt trauma and gunshot wounds. The TCCS Female is designed to provide comprehensive, life-saving training in the treatment of female trauma casualties at the point-of-injury, such as on the battlefield or in a mass shooting incident.

“Before the release of TCCS Female, competitive solutions for female casualty care patient simulators were extremely unauthentic, with some simply offering a male simulator with an overlay representing female anatomy and genitalia, which end users have described to me as being very “˜unrealistic’,” said Paul Bernal, VP Global Business Development Government & Military for OEI. “With women representing 18.6% of the total force and now serving in active combat roles, there’s a critical medical training gap for a fully realistic, anatomically correct female tactical casualty care simulator and the OEI TCCS Female fully satisfies that training need.”

“Data from recent conflicts has shown that female combat casualties have suffered a greater proportion of thoracic and abdominal injuries and a higher incidence of failure of needle decompression than in males, often due to the differences in body composition, and cardiovascular and respiratory functions,” said OEI Chief Technology Officer, Carlos Moreno. “The TCCS Female provides unprecedented differences in realism and anatomical accuracy that a combat medic needs to be aware of in order to improve outcomes for female patients.”

0
These highly sought-after features are further complemented by an accessories catalog that builds on the flexibility and customizability of the Pro XD.