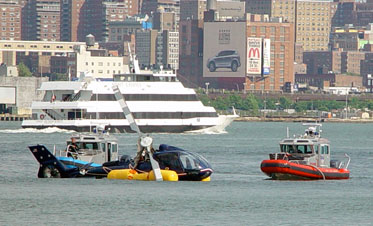 Witnesses said the aircraft was heading south over the river in the late afternoon when it made a loud booming noise before going down in the waters between New Jersey and New York, its rotors shattering and smoke pouring out.
Boaters in two private crafts quickly went to work and had fished out the passengers and pilot with no serious injuries by the time New Jersey Marine Police arrived. The passengers were transferred to a New York City Fire Department boat, and were taken to the Circle Line Pier at West 42nd Street and 12th Avenue, said Sgt. Stephen Jones, a spokesman for the New Jersey State Police.

“There were so many private boats in the water, they had everyone scooped up before the Marine Police got there,” Jones said.

None of the passengers was seriously injured, but five were taken to a city hospital for evaluation, he said. Their identities were not immediately available.

Among the passengers to emerge unscathed was New York Fire Department emergency medical technician Jose Mejia, 21, who helped his girlfriend and others exit the aircraft. All eight people aboard donned life jackets and were in the water for less than five minutes before rescuers arrived, said Fire Department spokesman Craig Mosia.

“There were no injuries and very little damage to the aircraft,” Baker said. “It looks as though it will be classified as an `incident,’ verses an `accident,’ ” she said.

The cause of the crash was not immediately available. FAA inspectors were examining the copter last night, Baker said.
Liberty Helicopters, a sightseeing tour operator based in New York City with a helipad at 30th Street, confirmed through a spokeswoman that it was the owner of the aircraft. She declined to comment on the incident.

The company runs sightseeing excursions around the Statue of Liberty, Ellis Island and Manhattan. For most tours, Liberty passengers pay between $30 and $186 per person for rides lasting from two to 17 minutes. Officials said the craft had not been privately contracted.

Passers-by enjoying a sunny afternoon on the New York waterfront said they knew there was trouble when they heard a loud noise coming from the aircraft.

“I heard the helicopter having difficulty,” said Robert deZeeuw, a 57-year-old Weehawken resident, as sweat trickled down his face. “It was a real slow, loud sound. I knew right away it was an aircraft of some kind heading west of New York.”
He and other members of WeeRow, a community boating organization, were standing on Pier 84 in New York, almost directly across from the crash scene, when they saw the helicopter go down.

Leslie Kwoh, Jim O’Neill and the Associate Press contributed to this report.