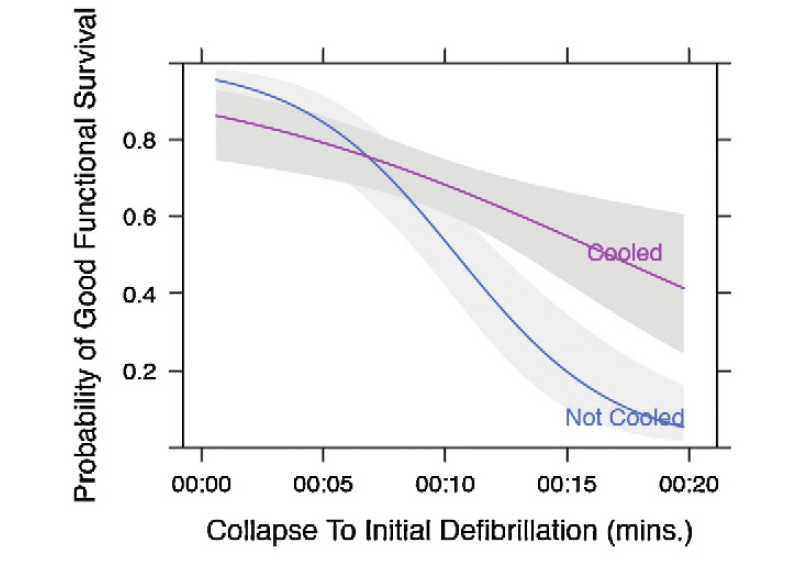 Hypothermia has a number of potential neuroprotective effects; however, they can be broken down into two main properties: metabolic and neuronal protection.

When mammals hibernate, they experience acidosis both from lactate and carbon dioxide, resulting in hypoxia and hypoglycemia. These conditions are not unlike those that occur post-cardiac arrest: Hypothermia decreases metabolic rate by about 6% per 1 degree C reduction in brain temperature. If blood flow and demand are coupled, it’s possible to see a 50% decline in cerebral metabolic after cooling the brain to 32 degrees C.

The 2015 AHA Guidelines and 2015 ERC Guidelines recommend targeted temperature management (TTM) for comatose adult patients with return of spontaneous circulation (ROSC) after cardiac arrest for all rhythms and all locations of cardiac arrest.1,2

Further, they recommend selecting and maintaining a constant temperature between 32 degrees C and 36 degrees C during TTM. Absolute contraindications to TTM are an awake and responsive patient, DNR, active non-compressible bleeding and the need for immediate surgery. Relative contraindications for TTM are trauma/exsanguination, intracranial hemorrhage, recent surgery, pregnancy and suspected sepsis.1,2

The recommendations from these guidelines are based primarily on three major studies. The first was conducted with 136 patients who were in v fib arrest, comatose, had stable hemodynamics, and used a number of external cooling device. Eight hours was the median time to reach the target temperature of 32—34 degrees C, and the cooling continued for a mean of 24 hours.

A total of 75 (55%) patients were in the hypothermia group and 54 (39%) of the patients fell into the normothermia group. The risk ratio was 1.40 (95% CI 1.08-1.81) for a favorable outcome in the hypothermic group. The number needed to treat (NNT) to improve neurological outcome was six patients; NNT to prevent one death was seven patients; and NNT to harm was 14 patients.

In a study on comatose survivors of cardiac arrest, a total of 77 patients were externally cooled after v fib arrest. An external cooling device and ice bags were initiated by EMS at ROSC.

The patient’s temperature was brought to 33.5 degrees C within two hours of ROSC and were cooled for 12 hours. The outcome results showed a good neurologic outcome in 49% in the hypothermia vs. 26% in the normothermic.4

The TTM Trial was the largest and best trial design to date. The study was a randomized controlled trial that included out-of-hospital cardiac arrest (OHCA) patients with all initial rhythms, and the cooling target was set at 33 degrees C vs. 36 degrees C. The primary outcome was the neurological performance of the cerebral performance category (CPC).

The patient population was different than previous trials, in that 90% of the episodes were witnessed, 73% had bystander CPR and 80% of the cases had a shockable rhythm. The average time down until BLS arrival was 1 minute and 10 minutes for ACLS; and 40% of these cases were STEMI and two-thirds had a corneal reflex and three-quarters had a pupillary reflex. Overall, there was no difference in adverse events.5

The ILCOR and AHA Guidelines came to the right conclusions based upon the current evidence. Remember that hypothermia is the platform, not the end. It’s important to build upon growth factors like insulin and IGF-1 and mitochondrial modulators like photomodulation of cytochrome oxidase.