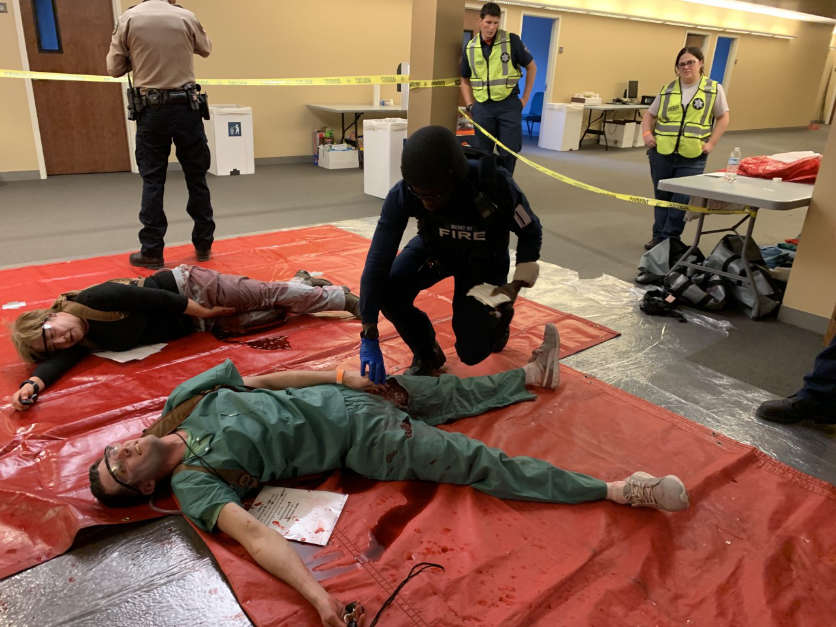 The paramedic above assesses active shooter victims while being continuously monitored through a Caretaker4 device. (Photo by Tim S. McGough)

Terrorism and mass shootings in the United States have shifted first responder tactics to providing care in “warm zones,” areas that potentially are under threat. These events have sparked initiatives that have led fire, emergency medical services (EMS), and police agencies in various states to increase the number of active-shooter training drills. Eighteen high-fidelity mass casualty active-shooter drills, hosted by South Metro Fire Rescue, were carried out in November 2018 and were designed as hyper-realistic immersion trainings for a multidisciplinary team of police, fire and EMS crews to increase responder preparedness for handling stressful situations.

The goal of the training was to “inoculate” responders to the ill effects of stress, by inducing stress comparable to a true emergency situation.1 The simulations were carried out in large churches where arriving responders would find a scene consistent with the first minutes of a mass shooting: victims were strewn throughout the building, the threat had yet to be detained, audio/visual disturbances were present and first responders entered the scene without knowledge of what they would find.

The victims suffered from a variety of traumatic injuries simulated by the use of Strategic Operations’ surgical Cut Suit technology, complete with moulage and artificial blood. These tools provided an accurate representation of wounds and facilitated the performance of true-to-life medical interventions by first responders. The use of surgical cut-suits allowed for realistic procedures, including: cricothyrotomies, needle decompressions, supervised chest tube placement, tourniquet placement, and wound packing by participating first responders.

Current response tactics for critical incidents, like the presence of an active shooter, follow a predetermined set of steps. Ideally, law enforcement arrives on the scene of the incident first and ensures it is secure. Subsequently arriving medical first responders form “rescue task forces” which enter the scene with the goal of locating and transporting victims to a guarded “warm-zone” casualty collection point.

Victims in the “warm-zone” are able to have life-saving interventions performed on them by emergency medical personnel while the safety of victims and rescuers is maintained.2 This strategy represents a shift in tactics from a classical emergency response, one that requires extensive interagency interactions involving neighboring fire, police and EMS responders. The initiation of warm zone operations allows responders to move patients to safer treatment areas sooner than by traditional SWAT and tactical medicine methods. Since most patients with penetrating injuries and massive hemorrhage die within minutes from exsanguination, decreases in time to intervention can lead to drastic improvements in life-saving capabilities. The purpose of this type of immersive, interprofessional, warm zone training is to increase the confidence levels among first responders, ensuring they are able to perform critical life-saving procedures in true emergency situations and increase patient survival rates.3

There is a need for research to be conducted in order to support the value of this type of training. Previous research in this field has shown that virtual reality simulators produce physiological stress responses similar to that of reality, which supports our hypothesis that a simulated training scenario will trigger stress responses comparable to real-life situations.4 Stefanidis et al. showed that training to automaticity leads to better performance than training to proficiency, and so continued training is a factor that leads to better outcomes in performance.5

Another recent study demonstrated that immersive medical simulations provokes an emotional response that causes individuals involved to respond as if the situation were real, leading to better training outcomes.6 This previous research helped guide our study, because we wanted to assess the efficacy of these training sessions while improving the skillset of the first-responders.

Our research project was designed to assess changes in physiological responses as paramedics underwent their hyper-realistic training sessions. Measurements of heart rate (HR) and arterial blood pressure were used to provide information about the stress response and adaptation to the training over time. The main aim of the study was to determine stress response and previous conditioning associated with mass-casualty training sessions and to look for possible correlations between demographic data of paramedics and their associated physiological response to the training.

A wireless Caretaker 4 monitoring device was placed on the non-dominant wrist and middle finger of paramedics engaged in active shooter drill training sessions to measure HR, systolic (SBP) and diastolic blood pressure (DBP) and MAP. The device collects metrics up to four times per second and transmits data via Bluetooth to a tablet. De-identified demographic survey information was collected that included: age, gender, years as a paramedic, number of training mass casualty events, and years of military service. Direct monitoring and reporting were performed throughout the entirety of the event.

Baseline vitals were established through 10-minute intervals while the medics were watching training videos or after the scenario was completed. The event biometric data was extrapolated from the time of dispatch to physician handoff in the emergency room. Seventeen paramedics (n=17) were chosen for data analysis. Sample standard deviations and averages were calculated for both baseline and the event. SBP above 220 and DBP above 120 were excluded from the dataset as an artifact from the device measurement.7

Baseline values were compared to event values for the following metrics: SBP, DBP, Pulse pressure, Mean Arterial Pressure (MAP) and HR. In every case, each measure’s average value increased significantly with the onset of the event. For each variable, the standard deviation increased by values on the order of seven units, indicating greatly varying pressures and HR (Table 1). These significant findings were found with paired t-tests, and residuals were found to be normal, thus satisfying the assumptions of the test.

The objective of our study was to monitor the physiological responses of paramedics providing emergency medical care in a simulated “warm-zone” established by law enforcement. We were able to demonstrate a marked change in blood pressure metrics and HR at the start of the simulation which was maintained throughout its course. The collected data was further evaluated to determine possible correlations between demographics, experience level and associated physiologic response for each paramedic’s individual training.

It is clear that simulation-based emergency training produces a measurable stress response in participants. It is likely that this response is comparable to that of a real emergency situation based upon the conclusions of previous studies in healthcare associated simulation training. Recent research by Peng et al. revealed little difference between live-tissue training and high-fidelity patient simulation training on salivary stress markers in combat medics.8

A 2016 study by Daglius et al. showed similar increases in HR and interleukin-1-beta when comparing simulated and live emergency situations.9 Stress levels have been shown to be equal among participants in simulations regardless of the role taken during the scenario.10 Based upon the results of these studies, we can infer that simulation-based emergency training is effective at producing a stress response comparable to a true emergency in most simulation participants regardless of the simulation materials used. Therefore, the physiological responses measured during simulated emergency events in this study are likely comparable to those seen in true emergency situations.

Assuming that variations in blood pressure and HR mirror those variations seen during an actual emergency, the observed demographic correlations appear logically associated. Examination of the gathered data showed that previous military was associated with less dramatic changes in vital sign measurements and a negative correlation with blood pressure metrics and heart rate, associating any amount of military experience with smaller deviations from baseline values.

Previous experience as a medic also had a negative correlation with heart rate. These results are logical and perhaps expected. Habituation and resilience training has been proven to reduce stress markers during stressful situations; previous military and medic experience would each have habituating effects.11

Individuals who rank highly resilient on the Connor-Davidson Resilience Scale have been shown to have pronounced SBP and DBP habituation to recurrent stress, as well as rapid recovery.12 These findings also align with expectations based on previous conclusions in similar research which showed that years of previous experience as a military nurse was associated with differences in individual stress response to combat casualty simulation.13

The only separate finding was for average HR, where the factor “Number of Previous Drills” was also statistically significant. The number of training mass casualty events has a positive coefficient, showing higher rates, with increasing number of training drills. This observed association is less easily explained than the previously discussed associations. It is possible that participation in multiple simulation exercises results in further suspension of disbelief inherent to simulated scenarios.

This would mean the increased delta from baseline more closely resembles what would be seen in a non-simulated emergency event. The association could also be due to a shared but unaccounted for variable, such as physical fitness or typical working role. A previous study found that resilient individuals maintain higher respiratory sinus arrhythmia during repeated stress, which may also partially explain the findings.12 More research on the effects of repeated simulation training on physiological stress markers may be warranted to explore this finding.

One potential limitation with the study is that all of the subjects were aware of their monitoring status. Previous studies have demonstrated that subjects can have reduced performance and information recall during elevated stressful simulation training.14 However, the benefit of high-fidelity simulation training and the advancement of training scenarios is proven to enhance skills and allows for opportunities to correct unpredicted field errors.15—18

Overall, the results from our study support the value and habituation effect of realistic, hands-on, training sessions for emergency medical services. This can be further applied to military personnel and law enforcement establishing the warm zone care trainings. Prehospital care should focus future efforts on further development of hyper-realistic training scenarios, utilizing high-fidelity simulators if possible, in order to best prepare for optimal patient outcome during mass casualty field care.

Special thanks to Caretaker for providing the Caretaker 4 devices, Strategic Operations for the Cut Suit technology and South Metro Fire Rescue for their support and willing participation.