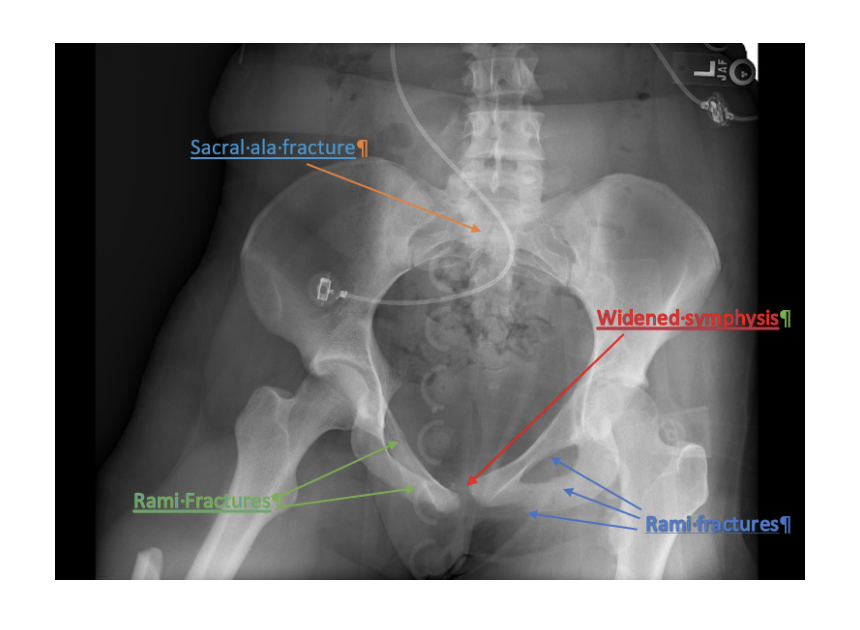 A restrained teenage female driver was involved in single vehicle collision at freeway speed. By report, the vehicle left the roadway at approximately 2:13 p.m. and struck a guardrail. The vehicle remained upright and the impact caused significant vehicle deformity and passenger compartment intrusion.

Upon arrival by ground EMS, the patient was found with both her legs entrapped by the steering wheel and deformed dashboard, which required extensive extrication. The initial assessment revealed bilateral femur deformities with evidence of significant hemorrhage from an open right femur fracture that was not accessible by EMS due to the vehicle deformity.

Because of the vehicle deformity and patient pinning by the steering wheel, her legs were not accessible and a tourniquet was not able to be placed on either leg. She was treated by the ground crew with two liters of IV fluids and TXA administration, yet continued to have evidence of hypovolemic shock. Due to the severity of her injuries and distance to the Level I trauma center, the decision was made to call the Helicopter Air Ambulance (HAA).

The arrival of the HAA crew at 2:47 p.m. brought with them the ability to transfuse low-titer O+ whole blood (LTOWB). Given the ongoing evidence of shock (HR 140, BP 60/P, Shock Index 2.3) the patient was transfused one unit of LTOWB by the HAA crew while she continued to be entrapped in the vehicle. At 3:04 p.m., she was extricated and a pelvic binder was applied. At the time of extrication, there was no frank evidence of hemorrhage from either lower extremity and a tourniquet was not applied. She was then flown from the scene by rotary wing to a military Level I trauma center in San Antonio, Texas.

Throughout the thirty-minute flight, her vitals improved and she maintained her mentation. While enroute, she received the second dose of TXA as a drip, and pain was controlled with intravenous ketamine and fentanyl. The remainder of the flight was uneventful with the last in-flight set of vitals BP 100/63, HR 120. The patient care was transferred to the hospital trauma team at 4:13 p.m.

Upon arrival in the trauma bay the patient was mentating appropriately and her vitals remained essentially unchanged with a BP 110/60 and HR 135 (Shock Index 1.2).

On primary survey, the patient was found to have a patent airway, non-tachypneic, and an adequate oxygen saturation on room air. On auscultation, she had clear lung sounds bilaterally with equal rise and fall of her chest without any evidence of tension physiology noted on exam. Her circulatory status was assessed with stable blood pressures, tachycardia, appearing grossly well-perfused, triphasic signals noted by Doppler in all extremities, with the exception of absence of pulse on the dorsalis pedis of the left lower extremity. No gross bleeding was noted which required immediate hemostasis; though there was saturated abdominal dressing on the patient’s right thigh.

Her secondary survey revealed an atraumatic head without signs of neurologic compromise or facial trauma. Her neck was in a rigid cervical spine collar with no midline tenderness, step-offs, or deformity noted. Her abdomen had an obvious left lower quadrant (LLQ) abrasions consistent with a “seatbelt sign;” ecchymosis was more prominent on the left than right. Otherwise, her abdomen was soft and non-tender. A large (approximately 20cm x 20cm) soft tissue avulsion encompassed the majority of the posterior and lateral aspect of the right distal thigh with obvious foreign bodies and contaminants from the scene. A chest x-ray showed a small left-sided pneumothorax and multiple rib fractures.

The patient was admitted to the ICU for ongoing monitoring and resuscitation, which included a second unit of whole blood. The orthopedic surgery service stabilized the bilateral femur fractures temporarily with external fixator application, and on hospital day two she went to the operative suite for bilateral femur intramedullary nail placement. She remained in the ICU until she was able to transfer to the floor on hospital day three. A surgery for right sacroilliac screw fixation and split thickness skin graft to the right thigh was required on hospital day five.

After definitive surgical fixation, the patient remained full weight bearing on the left and toe-touch weight bearing on the right lower extremity with daily physical therapy. Subsequently she was transferred to an acute rehabilitation facility for ongoing management towards return to activities of daily living.

Extensive wartime experience demonstrated a significant benefit in the use of whole blood transfusions for trauma patients. Until the 1970s, whole blood was the primary choice for resuscitation.1 Logistical constraints and the development of clinical subspecialties directed the market supply to IV fluids and blood component therapy (plasma, packed red blood cells and platelets) since the Vietnam War. As component therapy gained popularity, whole blood fell out of favor.2

Starting in 2001, combat operations in Afghanistan and Iraq increased the recognition of a need for a resuscitation product that did not have the logistical challenges of maintaining component therapy and provided a better alternative to normal saline. The development and initation of walking blood banks provided a rapid, logistically sustainable source of blood for hemorrhaging patients prior to arrival the hospital.

Early initiation of blood products by U.S. Army medical evacuation helicopters and far-forward units showed dramatic decreases in mortality and has generally been found to be safe.3 With a recognized improvement in patient outcomes and a desire to broaden it’s use, technology has been developed for the cold-storage of whole blood when a walking blood bank is not feasible.

STRAC is the first program to expand the whole blood delivery across a 26,000 square mile area in South Texas using both ground and air transport assets. In addition to EMS assets, both Level I trauma centers in San Antonio have LTOWB on-hand. Patient’s can receive LTOWB at the point of injury through the continuum of care until arrival at definitive care. The roll-out started with 18 regional HAA assets and has subsequently was expanded to include metropolitan, suburban and rural ground EMS assets. At this time there are now 11 ground-based EMS agencies carrying LTOWB in the STRAC region.

There are currently 22 hospitals around the country that use LTOWB as part of trauma resuscitations as well as a few prehospital transport assets, primarily rotary wing4. Ahead of more widespread prehospital use, the recent PAMPeR study have addressed the safety and decreased mortality associated with the use of pre-hospital administration of plasma5.

One barrier to implementation of a prehospital LTOWB program was the lack of common transfusion triggers for administration of LTOWB between EMS agencies. There also needed to be an easy way for on-scene crews to rapidly identify a patient eligible for transfusion. A large retrospective trauma registry analysis has shown that extremes of Shock Index (defined as: SI =First recorded heart rate/first recorded SBP) have been associated with increased risk of mortality.

A common reference is that a SI â‰¥ 0.9 can identify most critically ill patients9. The STRAC region is using a shock index of >1.0 as a transfusion trigger. This is an easily identified value that does not require extensive calculations. If HR is the same or higher than the SBP, the SI is >1.0. This patient received prehospital volume resuscitation that included oxygen carrying capacity (equivolent to PRBCs) and clotting factors (equivolent to plasma and platelets) with a significant improvement in her SI upon arrival at the receiving facility.

Due to the severity of the injuries and prolonged extrication, the patient was in a severe state of hemorrhagic shock. Early identification of life-threatening bleeding and aggressive resuscitation, to include prehospital blood administration, improved the patient’s chance of survivability to definitive care as evidence by improved vitals and a decreased prehospital shock index of 2.3 to her trauma center arrival with a SI of 1.2.

This case adds to the growing body of experience that trauma patients who lose blood benefit from having whole blood as the prehospital resuscitation fluid of choice.

Abnormal Neurology in the Scottish Islands

4.6.2021 0
This case highlights the need for extra vigilance and a thorough examination in cases of trauma in the elderly population.