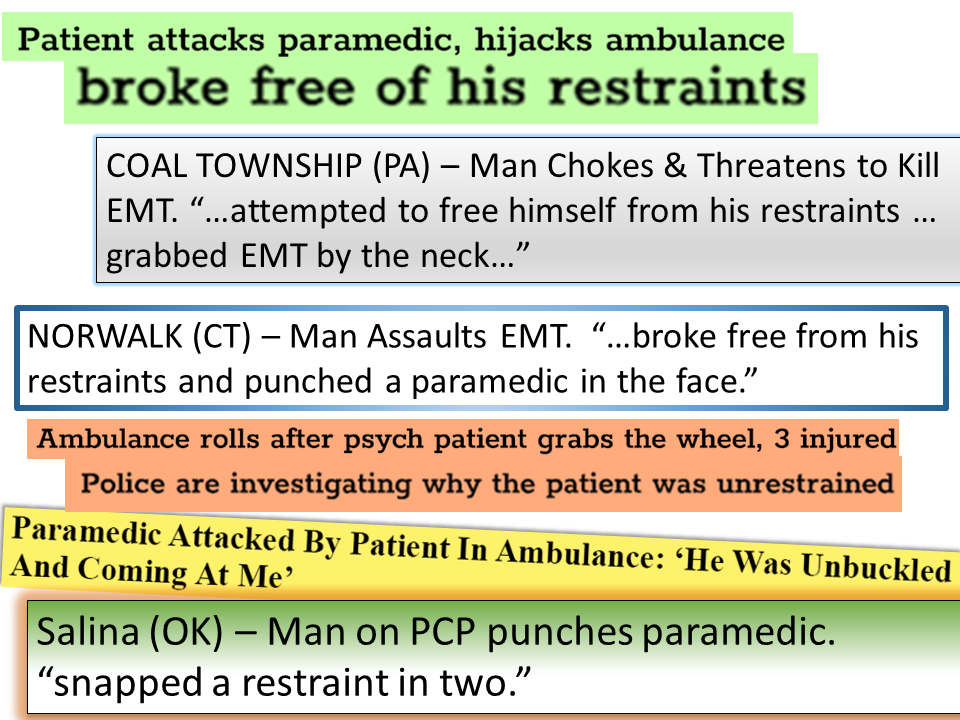 The Inadequacy of EMS Restraint Training

At the age of 21, college student and All-American athlete Brett Weiner is losing his battle with mental illness. One night, his condition grows so intense that he begins hearing voices telling him to kill himself. He’s taken to a nearby hospital, and the following morning, his nurse arranges to have him transferred to psychiatric facility.

Upon the arrival of EMS, the nurse explains that although Brett has been compliant for the staff, the ED physician nevertheless considers him a flight risk. After introducing themselves to Brett, the EMTs load him into the ambulance, where the attendant anchors Brett’s wrists to the stretcher using a pair of soft restraints An EMT sits down on the bench seat. The ambulance departs on what is thus far a classic example of an unremarkable, run-of-the-mill routine psych transfer, indistinguishable from thousands of others just like it. But the ordinary and mundane was about change, as if to prove Murphy’s Law that if something can go wrong, eventually it will.

Everything is Fine “¦ Until it Isn’t

About 10 minutes into the trip, Brett asks the attendant sitting beside him, “Could you please move to the seat behind me? Having you right beside me is making me really uncomfortable.” Not wanting to cause his patient anxiety, the EMT complies with the request and moves from the bench seat to the captain’s chair behind the stretcher. A few minutes later, the EMT receives an unpleasant surprise. Brett is standing in the back of the ambulance, free from his restraints! Quickly, the attendant grabs Brett and struggles to keep him inside the ambulance. The driver hears the commotion, pulls the ambulance off the highway and onto the shoulder, then radios for help. Brett escapes, sprints across seven lanes of traffic, and keeps on running.

Amazingly, an off-duty police officer is nearby and he manages to apprehend Brett only moments after his escape. The two talk for a few minutes, and then the officer begins to escort Brett back toward the waiting ambulance. But just as they reach the roadway, Brett pulls away and steps into traffic, right into the path of an oncoming pickup truck. He dies at the scene. Eighteen months later, a jury awards Brett’s family a $1 million judgment and finds the attending EMT guilty of gross negligence.1

The Connection Between Soft Restraints and Gross Negligence

How did the jury reach their conclusion? Was it because the EMT had “allowed” Brett to escape? Did the EMT have a duty to tackle his patient in the back of the ambulance and pin him to the floor until help arrived? No. Skim through any EMS textbook and count the number of times you find statements like, “The safety of the EMT is always the first priority.” We are not trained to dogpile our patients, apply pain compliance techniques, or put aggressive people in armbars and submission holds. Those tasks are best left to our friends in law enforcement. For us to mimic what we’ve seen on an episode of COPS or in a mixed martial arts competition would be reckless, to say the least.

What about the simple fact that the patient died? That seems like a logical reason to throw the book at someone, right? Wrong. Like his escape, Brett’s death was a result; and while resulting “damages” are essential to any claim of gross negligence, the pivotal question for the jury was whether the EMT or the ambulance service was in some way responsible for those damages. Had he breached his professional duty to his patient? Had he deviated from the standard of care? And if so, were these actions a proximate causation of Brett’s escape and death?

In the California jury’s opinion, the tragic events were set in motion when the EMT made two significant, preventable errors that another EMT — acting in accordance with the standard of care in the State of California — would not have made. First, he allegedly applied the soft restraints incorrectly. Second, he moved from the bench seat — a position that afforded him an unobstructed view of Brett’s restrained limbs — to the captain’s chair, which — with Brett in the semi-Fowler’s position — impeded his view of the restraints. The jury believed that, if not for the EMT’s actions, Brett’s death could have been prevented.

All It Takes Is Just One Bad Day

There is no happy ending to this story. No winners. No victors. Everyone lost. And I cannot help but wonder, if Brett had been your patient or mine, would the story have ended any differently? Think about it. Have you ever transported a depressed or suicidal patient? Have you ever placed a patient in soft restraints? At least 95 percent of EMTs and paramedics have restrained a patient.2 And three out of four (75%) have seen a patient escape from a restraint device.3

If you think you’re immune to having a restraint-related disaster, you may want to think again. That number is far too high to be written off as merely a handful of providers needing remedial training. The problem is systemic, threatening every EMS provider and agency in the U.S. and beyond. Something is horribly wrong with our approach to patient restraint.

Is Physical Restraint Beyond Our Scope of Practice?

Despite how common it is for EMTs and paramedics to perform behavioral restraint, it is the author’s experience that the vast majority receive little or no training in the practice, nor how to avoid the legal pitfalls. Ninety percent of EMS providers in the United States and abroad say they received a grand total of between zero and four hours of restraint education in EMT and paramedic school.3 By contrast, a newly recruited law enforcement officer will complete as much as 200 hours of restraint training in the police academy alone. That’s nearly 60% of the officer’s entry-level training!

Meanwhile, restraints comprise significantly less of initial EMS education. Worse yet, the evidence suggests that employers often overlook the need for ongoing restraint education. Last year, more than half of EMS professionals received absolutely no restraint training whatsoever.3 What little training we do receive is often superficial, disorganized, or taught by someone who is just as untrained as the rest of us. And in the absence of legitimate, EMS-appropriate restraint instruction, some providers resort to imitating techniques they’ve “learned” by observing law enforcement or watching mixed martial arts on television. Such methods are inconsistent with our responsibilities as care providers.

Further, by mimicking these techniques, we place ourselves, our coworkers, and our patients in harm’s way. In so doing, we reject everything we are taught to do when a scene becomes unsafe. Go to YouTube and run a search for “EMT Restraint Training.” What you’ll find will either make you laugh or give you a stroke.

In recent years, we have begun taking a long-overdue look at the problem of on-the-job assaults on EMTs and paramedics. Ironically, patient restraint — one of the most predictable scenarios for violence — remains largely ignored. Eighty percent of EMTs and paramedics say they have been assaulted while in the process of trying to restrain a patient.3 Less than half rate their training in “how to recognize violent situations and restrain patients as adequate,”4 and only about 20% say they feel “well prepared” to restrain a violent individual.3

Here Endeth the Lesson “¦ For Now

There exists a great disparity between the quantity and quality of preparation we presently receive and what we actually need. The supply does not meet the demand. Thankfully, this is a problem we can fix.

If you’re tired of playing Russian Roulette every time you reach for the soft restraints, stay tuned. In future articles, I’ll describe several evidence-supported practices for restraining patients safely, legally, and effectively. Knowing who, when, and how to restrain can make the difference between going home at the end of the shift or going to court, the unemployment line, or the morgue

This is one lesson you can’t afford to learn the hard way.