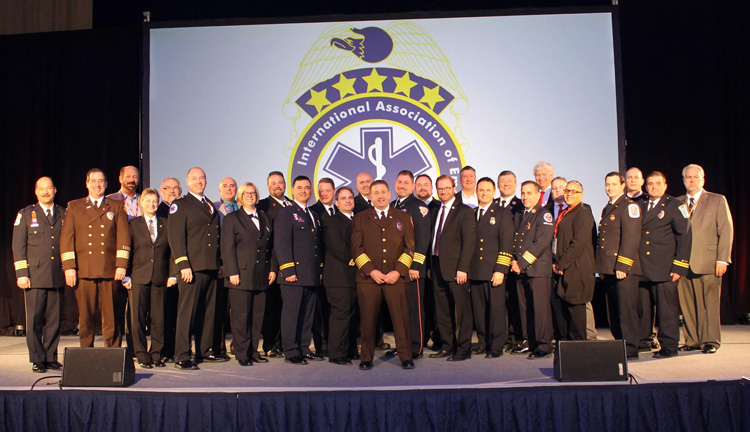 The International Association of EMS Chiefs (IAEMSC) held its Annual Leadership Summit in Washington, D.C., Dec. 12—14, 2016. This year’s summit was co-located with the 2016 National Healthcare Coalition Preparedness Conference (NHCPC). The NHCPC mission of “Ensuring Readiness, Building Resilience,” provided a perfect backdrop for what was a collaborative meeting of EMS leaders and healthcare preparedness stakeholders.

The decision to co-locate the Leadership Summit and the NHCPC grew out of a collaborative relationship between the IAEMSC and the MESH Coalition, the NHCPC host agency. During the 2015 IAEMSC Leadership Summit, the leadership of the two organizations proposed co-locating the two annual meetings for 2016, identifying EMS participation in healthcare coalitions as critical but highly variable across the nation. Conversations continued during the 2015 NHCPC conference in San Diego, and the two groups began planning together in earnest. The proposed co-location would allow for networking of EMS leaders and healthcare coalition stakeholders, the exchange of ideas and the fostering of future relationships–consistent with the national mandate for healthcare coalitions.

The 2016 combined meeting, expertly planned and executed by Scott Circle Events, was a success by all accounts. The event was held at the Washington Hilton, which provided a comfortable and sizeable venue to accommodate the 1,200+ attendees. The daily schedule of events was filled with tracked offerings on a variety of subjects related to healthcare preparedness, emergency management, emergency medical services and more.

Pre-conference events began on Monday, Dec. 11, and included full- and half-day workshops and classes. The IAEMSC pre-conference session, designed to provide attendees with toolbox of practical, implementable takeaways and contacts, included presentations and guidance from the Office of the Inspector General (OIG) of the Department of Health and Human Services (HHS) on EMS compliance with HIPAA, and how the OIG can be a resource for ambulance advisories on payment and the Affordable Care Act. The session also included presentations from representatives of the Office of the Assistant Secretary for Preparedness and Response (ASPR) on available resources in the ASPR Technical Resources, Assistance Center and Information Exchange (TRACIE) portal, and the benefits of the emPOWER database for emergency planning for community members with electricity-dependent equipment.

Other HHS representatives left attendees with guidance on Counter Narcotics and Terrorism Operational Medical Support (CONTOMS) for EMS personnel operating within law enforcement teams, Medicare ambulance billing and how Medicare Part B covers and affects reimbursement, and the implications of changes to CMS healthcare preparedness regulation changes. Another highlight of the first day for IAEMSC members was an invitation-only VIP tour of the U.S. Secret Service’s (USSS) James J. Rowley Training Center, thanks to the generosity of partners in the USSS Emergency Services Section.

The NHCPC’s keynote speaker, former Pennsylvania Governor and First Secretary of Homeland Security Tom Ridge, spoke about the importance of strong leadership, leadership in crisis, collaboration in planning and capability development in the age of evolving threats to the nation. IAEMSC attendees had the opportunity to speak with Governor Ridge after his address about how best to ensure the inclusion of EMS in national preparedness policy. The IAEMSC has long advocated for designation of a lead federal agency for EMS policy as a fiscal agent to grow capabilities and capacity, and as an advocate for the discipline. Governor Ridge demonstrated a deep understanding of the current gaps and offered to be a resource to the IAEMSC going forward.

Members of the IAEMSC present former governor and the first secretary of the U.S. Department of Homeland Security Tom Ridge with an association challenge coin following his keynote address.

HHS ASPR Dr. Nicole Lurie, a 2015 IAEMSC Leadership Summit speaker, gave a special address in a plenary session about the programs and successes of the office of ASPR over the past few years and the future of healthcare coalitions. IAEMSC Vice President Brendan Kearney, an integral part of the management of EMS response to the Boston Marathon bombings, introduced a panel discussion on lessons learned from recent crises, including the Boston bombings; the Flint, Mich., water crisis; Zika virus; Hurricane Matthew; and the Pulse nightclub shooting.

IAEMSC President Paul Brennan spoke to the plenary session about the importance of active EMS engagement in healthcare coalitions, encouraging NHCPC attendees to look for EMS chiefs–easy to spot in their dress uniforms–and start a dialogue. Brennan lauded the increasing number of coalitions with active EMS members, based on an audience show of hands at this year’s NHCPC compared to last year’s meeting in San Diego. 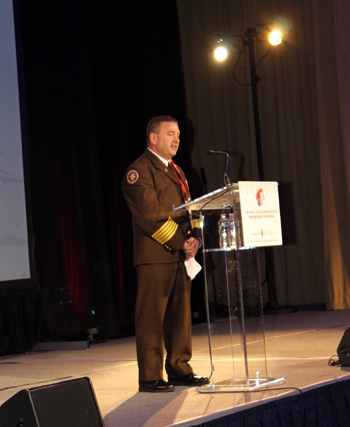 The Leadership Summit agenda provided thought-provoking presentations and updates from federal partners. The intimate nature of the summit provides attendees with a forum to have frank conversations with federal leaders about issues important to contemporary EMS.

The summit kicked off with a conversational session by IAEMSC founding member, retired Boston EMS Chief, former Deputy FEMA Administrator, and Distinguished Harvard Fellow Rich Serino, who talked about leadership challenges in times of change. The discussion focused on “swarm intelligence and leadership” and how decentralized leadership can benefit management of incidents like the Boston Marathon bombing.

The IAEMSC is a participant in the International Red Cross’ Healthcare in Danger Community of Action, a global initiative to reduce violence against healthcare providers. The Community of Action seeks to bring attention to threats against EMS providers and collaboratively develop and share best safety practices. Frederik Siem, Norwegian Red Cross senior adviser on the protection of healthcare in insecure environments, and Rodney Eid, assistant director for crisis management at EMS Lebanese Red Cross, provided fascinating context about the real threats EMS providers face every day, through their extensive experiences working with EMS in hazard and conflict areas around the world. 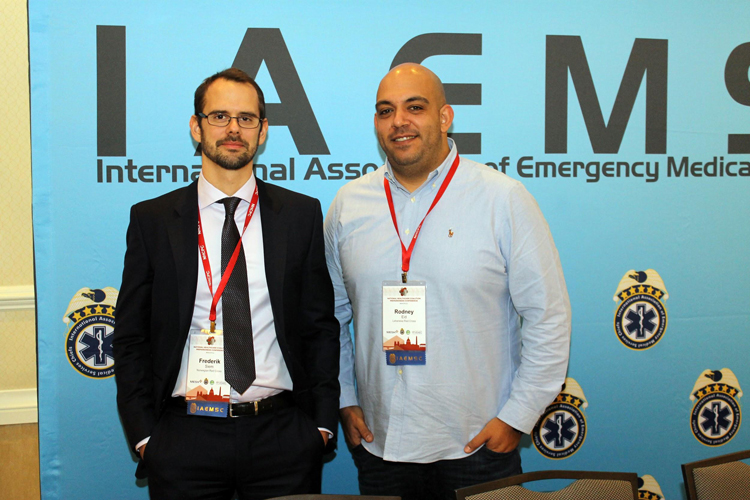 Assistant Homeland Security Secretary and Chief Medical Officer Dr. Kathryn Brinsfield again joined IAEMSC members to discuss EMS’ role in the homeland security enterprise and how the discipline could work toward even greater inclusion in national preparedness policy. Brinsfield discussed the importance of leveraging the recently released National Academy of Sciences report, “Military Trauma Care’s Learning Health System and its Translation to the Civilian Sector” as a tool to drive change in EMS policy with the attention being paid to the report’s findings in Washington and elsewhere.

Principal Deputy HHS ASPR Edward Gabriel graciously brought his personal knowledge of EMS and the EMS community to the conversation, discussing ASPR elements that work for the EMS community such as the Biomedical Advanced Research and Development Authority (BARDA). Gabriel talked about how federal departments work together on behalf of EMS, and as the chair of the Federal Interagency Committee on EMS (FICEMS), how he works to get all of the federal stakeholders aligned in supporting the EMS community.

Dr. David Marcozzi, assistant chief medical officer for acute care at University of Maryland Medical Center, and James Robinson, IAEMSC immediate past president–both committee members on the National Academy of Sciences Committee on Military Trauma Care’s Learning Health System and its Translation to the Civilian Sector–presented findings and recommendations from the committee’s report with an emphasis on those relevant to EMS chiefs. The report, which identified the massive societal burden that trauma still represents to Americans 50 years after the 1966 white paper “Accidental Death and Disability: The neglected disease of modern society,” makes a call for White House leadership in declaring a national aim and coordinated efforts across the military and civilian sectors to integrate trauma systems and save lives. Prehospital care was recognized in the report as the domain in which the most progress has been made in saving military lives and offering some of the greatest opportunity in the civilian sector. 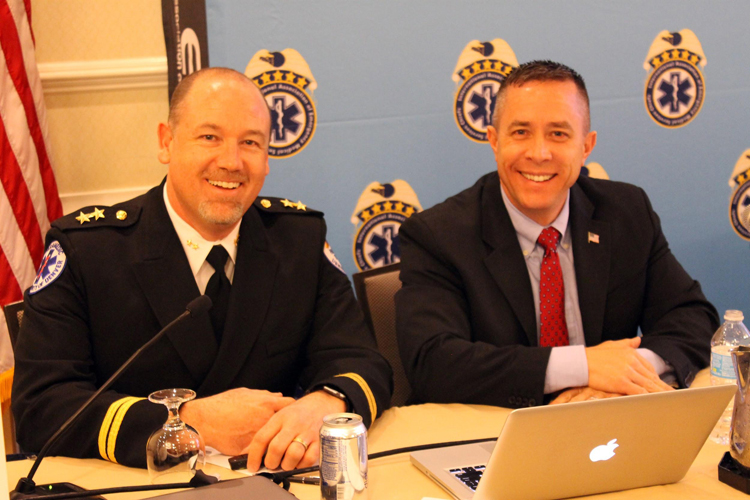 James Robinson and Dr. David Marcozzi prepare to deliver their presentation on the national trauma system.

Possibly the most well-attended and provocative presentation of the summit was from Clear Creek County, Colo., EMS Chief Nicolena Johnson and Deputy Chief Ezekiel Peters. Peters moderated a panel presentation of a personnel and community resilience project in which auricular acupuncture is employed as a primary preventive and response treatment to emotional trauma. The project, which incorporates a regional approach to individual provider resilience as a component of a community’s resilience, includes rural and urban providers and is supported by the state of Colorado’s Department of Public Health and Environment’s (CDPHE) Office of Emergency Preparedness and Response.

The panel included Peters and Johnson, CDPHE Behavioral Health Specialist Lynn Garst, and Steve Shomo, a clinical acupuncturist with extensive experience providing crisis auricular treatment to responders and victims from incidents such as the Pulse Nightclub shooting in Orlando, the San Bernardino terrorist attacks, and the Colorado Springs Planned Parenthood shootings, among others. Attendees were fully engaged and had many questions about how their communities might replicate the project. The concept of the interrelationship between individual and community resilience in EMS is novel and the project shows great promise in bringing a preventive and crisis treatment modality to a population of responders who seem to have potential resistance to traditional psychotherapeutic modalities. Johnson also presented on how EMS can supplement capacity of a rural community during public health emergencies, encouraging public health to forge strong relationships with their EMS agencies. 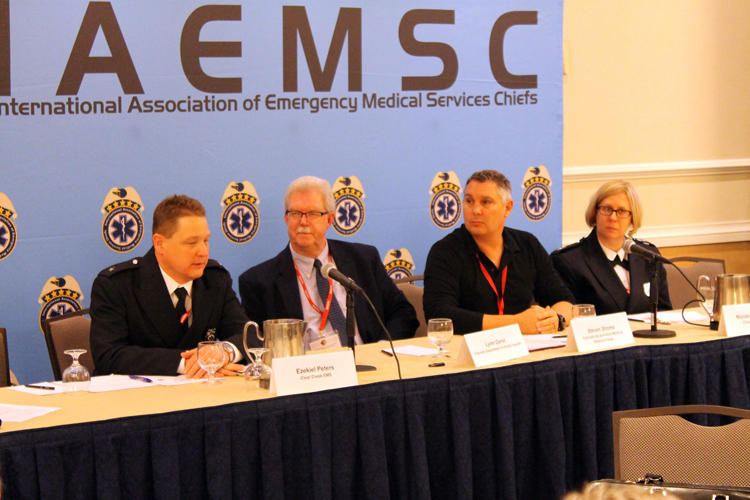 The decision to co-locate the IAEMSC Annual Leadership Summit with the NHCPC turned out to be a great one. The goal of providing a forum for a broad spectrum of healthcare preparedness and EMS leaders to share ideas and build relationships was met and exceeded. Stay tuned for the announcement of the 2017 IAEMSC Annual Leadership Summit, which will again be held in the nation’s capital.

James Robinson is Immediate Past President of the International Association of EMS Chiefs (IAEMSC) and Assistant Chief for the Denver Health Paramedic Division in Denver, Colo.

About the MESH Coalition: Based in Indianapolis, the MESH Coalition is a nonprofit, public-private partnership that coordinates, supports and strengthens healthcare and related entities to mitigate, prepare for, respond to and recover from the effects of emergency and crisis events and incidents. The MESH Coalition hosts the NHCPC. meshcoalition.org

About the IAEMSC: The IAEMSC is an international EMS organization whose mission is to support, promote and advance the leadership of EMS response entities and to advocate for the EMS profession. IAEMSC membership is made up of leaders from both career and volunteer EMS organizations and proudly represents and embraces the diversity of EMS agencies throughout the world. IAEMSC.org