Recruiting, screening and training employees is a costly venture. A study on the cost of turnover in EMS, published this past year in Prehospital Emergency Care, found that the weighted median cost of turnover was more than $71,000 per employee.1 Therefore, retaining employees–particularly top performers–should be an organizational priority.

Years ago, Timothy Earles, a paramedic with Wake County (N.C.) EMS, noticed the high rate of turnover across multiple systems; the single most predicable factor was the schedules being worked. “Either you’re working 24 hours or rotating days and it doesn’t go along with the rest of society, or you’re trying to raise kids or go to college.” He decided there had to be a better way to schedule staff. “The goal was to figure out how to design this around the most popular lifestyles and needs in EMS but also make it more cost effective to use than others.”

In his experience, a mix of 12- and 24-hour units tends to be the most cost-effective and efficient way to provide coverage 24 hours a day, seven days a week, across a service area with varying degrees of demand corresponding to location or time of day.

After a lot of number crunching, Earles developed an unconventional schedule that uses a combination of 12 and 24-hour shifts scheduled the same days each week. (See sample schedule.) His “51s” schedule results in fewer hours or fewer days worked than traditional EMS schedules. Also, resources are distributed more efficiently to meet system demands. Employees choose their shifts according to:

Employees are then “assigned to two units that have been matched inversely to assure even distribution of workload throughout the system for each employee,” he says. For instance, the higher the call volume of the 12-hour unit worked, the lower the call volume of the 24-hour shift worked for each schedule choice–or vice versa. Reducing inequities in individual workload and contribution of time boosts staff morale.

“There are five combinations, and two of the combinations result in 40% of the workforce having long weekends off every week. Some work just the weekend, and others can attend college without their work schedule interfering–anything you want to do, because it’s all set days, the same days each week just like the rest of the world. That’s the biggest draw.” 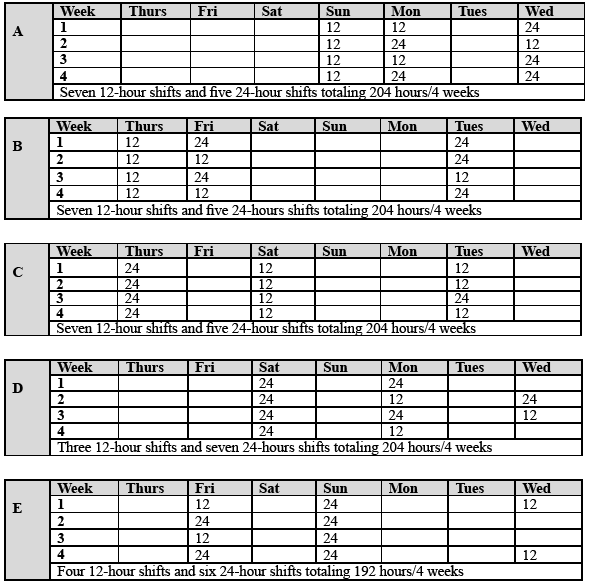 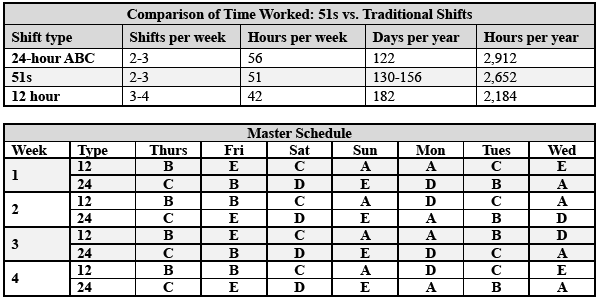 Beyond boosting job satisfaction and reducing turnover, the 51s schedule can cut staffing costs in the vast majority of cases, Earles says. For example, his schedule takes only five people to run each truck for a typical 24-hour shift, compared with the six people–three shifts of two–required for a typical 24-hour shift. If the system runs 12-hour shifts, it takes eight employees total–four each day for two shifts. “And it’s the same thing with 24/72 schedules,” he says.

Eliminating rotating days by requiring the same days worked each week can accommodate multiple lifestyles, Earles says. The 51s schedule has proven popular with employees because it reduces each one’s number of shifts, decreasing individual workload, fatigue and overnight assignments, he says.

“The use of less benefit time that was previously necessary to take long expanses of time off also results in savings for the system when less overtime is paid to cover these shifts, and even more when combined with a benefit-time buy-back program in which staff are paid for the time they didn’t have to use to take a vacation, or attend school or be home with their children,” he says.

Earles noted that it’s not necessary to implement the 51s schedule across the board. Flexibility is key to finding the right combination to meet the system’s needs and accommodate staff preferences. “There can be staff who have managed to construct their lifestyle around the limitations of their existing schedule, for which a change might lead them to no other option than leaving. Some fine-tuning will probably be necessary to find the right balance, and 51s can provide that too.”

Any staffing model, including 51s, has its limitations. For instance, because of the pattern of days worked on each schedule, it isn’t recommended that the peak load units assigned to the day shift be scheduled past 10 p.m. This is to ensure adequate time is allowed for rest on those few occasions when staff may be assigned to work the next day. This was intentionally designed into 51s, Earles says, and since many systems experience a drop in call volume by this time in the evening, it’s not frequently an issue.

Earles also cautions against changing salaries to reflect a decrease in the number of hours worked, as is the case when converting from a schedule averaging 56 hours a week, like the traditional 24-hour ABC schedule. “The idea here is to do what we can to keep people in our field and attract others to it,” he says. “Once the savings in attrition is realized, combined with the reduction in costs of recruiting, added to the literally millions saved in many cases when further hiring over the next several years can be avoided if need be, there really becomes no reason to consider reductions in pay.”

Many systems that have explored the switch to a 51s schedule have done so quietly, because crews are naturally suspicious of any scheduling changes. “There often is the initial hesitation and rejection that come wiht any change until more is learned adn realized about its replacement,” he says.

Little more than a year after writing an article on this “Smarter Schedule,” Earles says 34 agencies in three countries have inquired and either implemented or evaluated a transition–some saving millions of dollars. As a service to the industry, he offers free consultations with agencies and will develop a 51s schedule at no cost. The payback, he says, is seeing the EMS community retain employees and weather the economic downturn without cutting staff or reducing unit hours.

Officials with a large system with around 200 employees asked if my 51s schedule could help them. They explained that they faced what seems to have become a somewhat common dilemma in our field–they had implemented system status management several years prior to meet the demands of their growing city, and the working conditions combined with the overall resulting increase in costs began to take their toll. The rate of attrition climbed faster than ever. They began the downward spiral that results when workload, fatigue, mistakes and injuries among remaining staff increases and morale decreases.

To make matters worse, they had been operating under a hiring freeze, dictated by the economy, for which there was no end in sight. So it was impossible to anticipate with any realistic accuracy when they might be able to rebuild staffing levels. Recognizing this system’s position, competing interests had begun to make claims that they could meet the system’s contractual response and service goals for less, if given the chance.

A brief interview revealed that, like most systems, call volume in their service decreased considerably during the overnight hours, dipping to between 35 and 40% of what it was during the peak load hours of the daytime. These peak load hours also represented more than 70% of the calls in which response times couldn’t be met due to the sheer volume of calls, even when fully staffed. Demands were too heavy to think about using the more cost-effective 24-hour shifts for all staff in all areas of their response region. However, 24-hour shifts would be reasonable in some areas, especially when call volume throughout the day could be shared by peak load units added there. This also meant that the more expensive 12-hour units staffed around the clock weren’t really necessary. This is a property common to many systems, and meant the opportunity existed to redistribute current resources to more accurately reflect demands.

Officials had considered using two separate and disconnected schedules of 12-hour and 24-hour shifts to staff the appropriate districts within the service area, and this would be more efficient and cost-effective. But the disparity between staff members in workload, hourly pay rate and hours that would be worked, including the number of days per month, caused administrators to hesitate. They were already sensitive to possible further loss of morale that can result when staff members are not assigned their schedule preference. Understandably, resources responsible for accounting and payroll also voiced concerns.

The solution was to identify how to redistribute existing resources to more efficiently and effectively mirror demands, eliminate the disparities of implementing disconnected schedules, reduce individual workload and fatigue and create an environment that would reduce attrition and increase morale. Needless to say, they were thrilled when they learned that the 51s schedule could accomplish these goals.

This system previously used 12-hour shifts around the clock, requiring eight staff for each truck, resulting in 25 units staffed equally throughout each day and night. Using 51s, which requires just five staff members for each unit, this same system is now able to staff 40 trucks during peak load hours, declining overnight to 20 units according to reduced demand. This turned out not only to solve their problem of finding the resources they needed to meet response times far more often, it also eliminated the need for the further staffing indicated by anticipated growth in their community over the next several years. The 51s schedule enabled the agency to redistribute existing resources more effectively and efficiently than before, and without recruiting, hiring, clothing, training or paying additional salary and benefits to new staff.

Timothy Earles, EMT-P, a paramedic with Wake County EMS based in Raleigh, N.C., evaluates staffing needs and advises on how a 51s schedule can apply at no charge. For more information, please e-mail him at tearlesnc@yahoo.com.