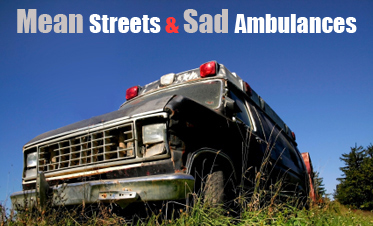 North Philadelphia, early ’90s, riding a tour with my buddy Bob on Medic 13, the busiest rig in the city. Medic 13’s district matched any in the country for urban decay and desperation. On the first day of the four-day tour, as we drove deeper into the district from Bob’s working-class neighborhood, the landscape descended step by step down into a Boschian vision of Hades. First a few vacant row houses, then more, until the inhabited buildings are far outnumbered by the burned and abandoned. You arrive at the firehouse, itself a decrepit, utilitarian brick structure surrounded by brick-strewn empty lots, burned-out tenements, cracked sidewalks and pockmarked streets. The Heart of Darkness, whose theme song is a cacophony of wailing sirens and the bass beat escaping the jukebox in a corner bar across from the station. The parking lot is enclosed in razor-wire topped fence. Fire Station 27, Devil’s Island in the City of Brotherly Love.

You sense a seismic shift of consciousness — from the familiar to the surreal — as the mind tries to place this scene of destruction in late 20 century America and not ravaged post-war Europe. I hadn’t seen anything like this since growing up in New York in the ’60s and ’70s. This was every bit as bad as the South Bronx in 1975, with no signs it was going to get better. I was about to experience it even more close up and personal than I had back then.

It didn’t take long. Medic 13 basically doesn’t stop rolling during a shift, and 12 runs in a 12-hour shift isn’t unusual. The rig itself was a sled on wheels. Like the old Checker cabs I used to drive in New York, the first thing you did when you checked out your rig was to see what wasn’t working that day. Maybe you had headlights, maybe not. Both wipers working? Bonus! This rig had the linoleum in the back worn down to the wood floor underneath by the cot wheels. Saline bags spiked and hung from the hooks never made it to the next shift — no worry about anything expiring on Medic 13.

A decade later, that tour still remains vivid in my mind, full of haunting, shadowy memories. Every call, even the most mundane, took us to another world, a world of poverty and hopelessness and helplessness most Americans expect of the Third World, but cannot imagine in our own home. When Bob left Philly, he had been on Medic 13 for more than two years — a record at that time. Most medics didn’t last more than a few months. And he paid the price in his soul. His partner transferred out but came back after Bob had left to return to Ohio. A great guy from a Pennsylvania farm town, Bob’s partner was eventually pushed over the edge by the relentless waves of violence, misery and stupidity through which Medic 13 unit daily ploughed. He finally lost it on a call and “scalped” a patient: He grabbed his shears and cut the ponytail off a guy and did a war dance, whooping and swinging it around his head.

Unless you’ve spent a tour on Medic 13, don’t rush to righteous indignation and judgment. On our first call of the day, shortly after our 4 p.m. start time, we were dispatched to a difficulty breathing. En route we were diverted to an overpass. As we got out of the rig and looked over the edge of the bridge to the rail yard below, what we saw at first didn’t make any sense — the mind couldn’t get around what the eyes were seeing. A guy was lying parallel to one of the tracks. He kept trying to roll to his right side to get up, but every time he did so his left arm and leg stayed where they were. But that’s a story in itself.

Where in the World of EMS is A.J. Heightman?