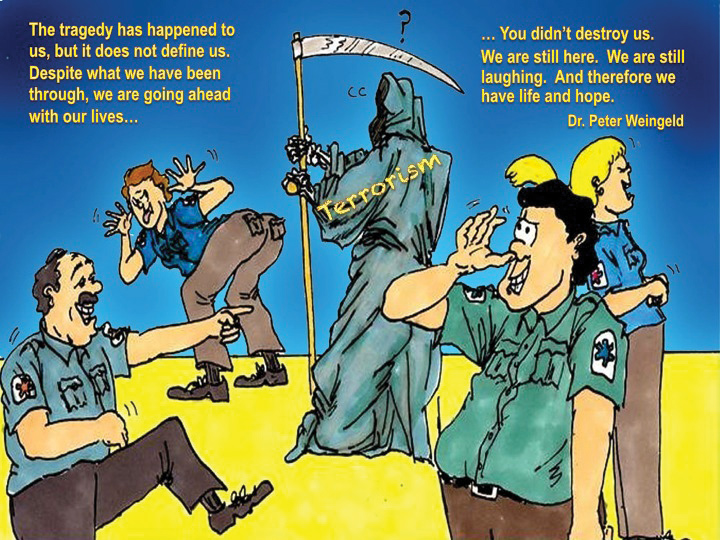 Since CNN flashes this headline across the screen every five minutes or so, I’ve become accustomed to ignoring the usually repetitive trivial broadcasts that follow. Besides, today I only had the TV on as background noise as I was contemplating a sit-down to write my overdue JEMS column (by the way, it’s exceptionally rare for me not to submit by the deadline date. Seriously, just ask my editors … after they stop laughing of course).

Unlike 9/11, incomprehensible shock wasn’t my first reaction. I was angry.

Once again our nation was confronted with a terrorist act, but a realization hit me on how terrorism is changing. Al Qaeda, whose focused attacks were primarily aimed at famous landmarks with sophisticated planning, had been replaced with the Islamic State of Iraq and the Levant (ISIS)–whose simplistic, but highly effective methodology is to kill anybody wherever they are. They use social media to sell murder 24/7, using a chaotic web of trackless twitter messaging that buzzes thousands of cell phones repeating the same line over and over again: Kill anybody wherever you are.

How can anyone be so cruel, malevolent and destructive? I’ve stopped trying to analyze why terrorists do what they do. They are, in my mind, soulless and cowardly creatures unworthy of thought other than how to destroy them.

One key component terrorists haven’t figured out, and probably will never comprehend, is America’s attitude toward adversity. And I’m not speaking of our military might and willingness to see this through. That’s a given. We’ll continue to search and destroy these criminal fundamentalists for however long it takes.

But there’s another vital element to our character that’s even more powerful in sustaining us as a nation and as a people that will always repel the terrorists’ best efforts to have us adhere to their zealot ideology of rigid conformity and control. I’m speaking, of course, of our sense of humor. Those irreverent punch lines and sarcastic digs, and mocking those who attempt to instill fear in our hearts. It takes strength to laugh when you’re afraid and in despair.

The truth is, terrorism is more than just creating an ever-increasing body count. The primary goal is psychological–to inflict inexplicable fear into the hearts and minds of those you wish to constrain.

Laughing is a symbol of freedom in an open society–the reason terrorists in Paris attacked the French satirical magazine Charlie Hebdo. If humor dies, so does our independence

With the recent ISIS-inspired attack in San Bernardino and now Orlando, there’s naturally a tremendous sense of anxiety. With ISIS we now know something bad can happen to anyone, anywhere, anytime. To help alleviate this anxiety, we have to live in a state of continuous awareness of our surroundings. In almost every terrorist attack someone saw something and didn’t report it. We can no longer afford to fail to report suspicious behavior.

The odds of personally being attacked by terrorists are infinitesimal, but we still need to stay alert, especially for those working in public safety. Terrorists will eventually target us–the sheep dogs that protect the sheep. EMS providers may need to look over their shoulder more often, but shouldn’t forget to allow themselves to channel fear into something healthy and sustainable such as our sense of humor–sick and twisted as it is.

In the wake of the Paris attack there was the motto, “She is tossed by the waves, but is not sunk.” We in public safety need our laughter as much as our tears when battling these waves of terror. Terrorism will never sink us, but humor can be a life preserver when you need a break from treading water.