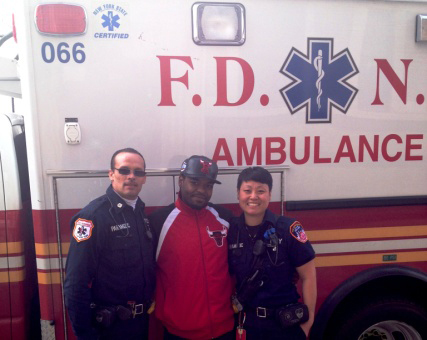 There are two clichés that folks involved in sports and EMS often hear: Practice makes perfect and You play like you practice. Both have helped me in my life and career and I trust they have helped many of you.

Call of a Lifetime
Joe Fortis is a paramedic at the Fire Department of New York (FDNY), the crew that won first place in the JEMS Games advanced clinical competition held at the 2013 EMS Today conference. A month earlier, on Feb. 11, Fortis was involved in a challenging, complex cardiac arrest resuscitation that saved the life of a 24-year-old Bronx resident.

This case is what many would say was a once-in-a-lifetime call because of its complexity and need for the right care and medications all at exactly the right time. It’s a difficult call for even the most seasoned paramedic, but an even more challenging call for Fortis–he’d graduated from the FDNY paramedic academy just six months earlier.

Truth in Cliché
This save highlights how Fortis’ regular practice sessions with the FDNY clinical competition team and the team’s use of the FDNY simulation center helped ensure Fortis, his senior mentor partner and the BLS and EMS supervisor on the scene performed flawlessly in their resuscitation of patient Jessi Saldana.

Fortis had served as an EMT with FDNY EMS and as an EMT member of the FDNY clinical competition team for 20 years before completing his paramedic training. He was on duty with his senior mentor paramedic Joy Canter when they were dispatched to assist seasoned EMTs Shakeel Ajaz and Margaret Devlin on the scene of a cardiac event.

The call was received at 8:44 a.m. as an “unknown” problem. Ajaz and Devlin arrived on scene in ambulance 14B just seven minutes later.

When they began their initial assessment of Saldana, he reported having experienced a brief period of shortness of breath, but also noted that his palms became sweaty before he began to feel mid-chest pain and numbness in his left arm.

Ajaz and Devlin alertly realized that Saldana was having significant and progressive chest pain and immediately called for an ALS unit and fire first responders to assist them. Had they not done so, this call could have had a totally different outcome.

As with many multi-unit responses, the 1414 Battalion EMS Supervisor (radio call sign “Condition 14″) responded to the call. Lt. Felix Granovskiy’s role at this call was to ensure the proper coordination of all BLS, ALS and fire resources.

Fortis and Canter arrival on scene in ALS ambulance 14X2, 10 minutes after the BLS request, and entered the BLS ambulance just after the patient was placed inside.

Saldana was on oxygen via a non-rebreather mask and bag. He was still able to communicate with the crew, but it was apparent he was in severe respiratory distress and severely diaphoretic. He was also displaying Levine’s sign–the subconscious clenching of fists by a patient–associated with pain of a cardiac origin. 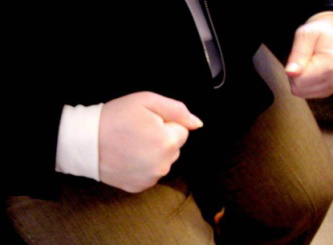 Saldana was also very anxious, as is often the case with a patient who has a premonition they are in serious medical trouble. He told Fortis he was “running out of breath” and asked the crew not to let him die.

Fortis told him, “Relax, We got you! We’re not gonna let you die. We’re gonna make sure you survive!” 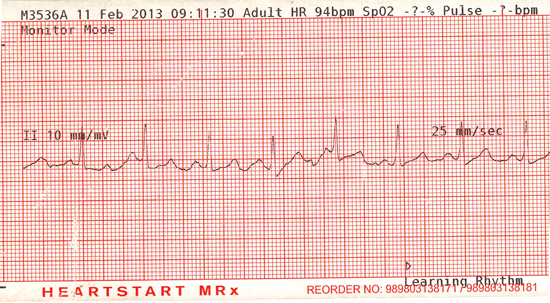 After asking the patient a few questions, Fortis orally administered 162 mg of aspirin. His vitals at the time were: heart rate of 100; BP 180/100; and SPO2 of 98. His 12-lead ECG showed a sinus tachycardia with Tombstone T waves. (See ECG Strip 1.)

Seeing his significant cardiac presentation, Fortis told the crew to begin transport and transmitted his 12-lead to a telemetry physician who confirmed and authorized a ST elevation myocardial infarction (STEMI) notification.

All advanced care was administered while en route, pulling over every time Saldana’s rhythm changed to confirm and treat accordingly.

Lt. Granovskiy coordinated the notification of Bronx Lebanon Hospital, which is a STEMI/cardiac arrest/hypothermia center. The hospital then called a STEMI alert and placed its cardiac cauterization lab on standby to receive the patient.

Fortis administered 0.4 mg sublingual nitro and established IV access of normal saline, and ran it at KVO rate to help prep the patient for the ED.

Suddenly, Saldana began to seize and, after the seizure activity stopped, presented with ventricular tachycardia.

Fortis and the crew placed monitoring/defibrillation pads on the patient and, after confirming he had a pulse, performed synchronized cardioversion.

After the cardioversion, Saldana’s rhythm converted to sinus tachycardia and he began moving around quite a bit.

However, one minute later, he calmed down and then suddenly lapsed into v fib. (See ECG Strip 2.)

Each time they defibrillated and started CPR. On his final shock/conversion, Saldana started to move again and the team of rescuers continued to assist his ventilations. (See ECG Strip 6.)

As soon the ambulance arrived at the Bronx Lebonon ED, they were met by awaiting staff that rapidly took an updated report on the patient’s care and condition and sent him right to the facility’s cath lab.

In the cath lab it was determined that Saldana had a 100% occlusion to his left main stem coronary artery and he was immediately stented.

The ED staff members complimented the FDNY BLS and ALS teams on what they called “a perfectly run call.”

The next day, Fortis got the phone call of a lifetime: Saldana wanted to meet him. Fortis made arrangements to visit Saldana the second day after his cardiac arrest, and was pleased to find his young patient sitting up in bed watching TV when he entered the room.

As Fortis approached, Saldana reached forward, hugged Fortis and thanked him for saving his life. He told Fortis the one thing he remembered before he lost consciousness was how relaxed Fortis and his colleagues made him feel. He says, “I felt like everything was going to be alright. They were really reassuring.”

Canter, Ajaz and Devlin also visited Saldana the next day and received the same praise and words of appreciation from Saldana about their calm approach and the outstanding care they rendered to him.

I heard about this case after the JEMS Games when Fortis wrote to me, thanking me and the JEMS Games staff for putting together “great JEMS Games scenarios that challenge the competing teams.” He went on to say:

“I wanted to thank you, as does my patient, for making me strive to be the best of the best. I practiced that arrest scenario for the JEMS Games over and over for the past few years and to get that in the finals, as well as on the street, was crucial to my success. We train all the time to compete at these events and they say that practice makes perfect.

“I can say that our clinical competition team practice sessions and simulations, and the great scenarios presented at the JEMS Games Clinical Competition, have made me a strong EMT over the years and, over the past six months, a better paramedic.”

It was this comment that made me reach out to Saldana, hear his story directly, obtain his consent to be interviewed, and present this compelling resuscitation to you.

This case is a great example of results of a well-run cardiac arrest resuscitation and standardized training and protocols, and a “team” approach. Fortis and Canter (the senior mentor paramedic) worked like a well-oiled machine even though it was just their second day working together.

It’s also an example of the critical importance of simulation training and continual practice in ensuring that you’re properly prepared to orchestrate resuscitations like this.