More
Home Administration and Leadership Should Naloxone Be Available to All First Responders? 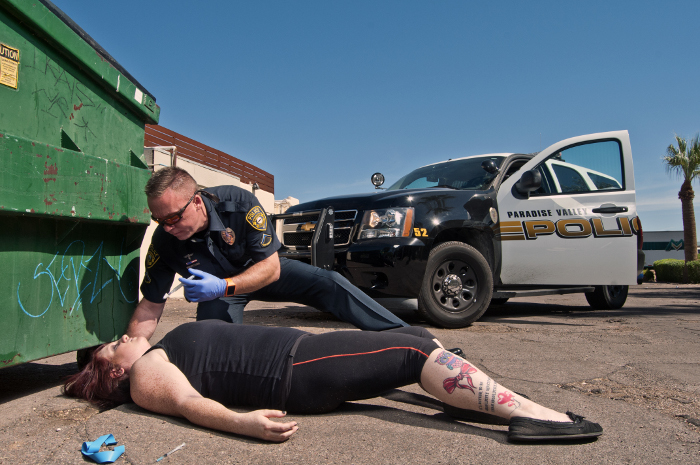 Dispatch: Police unit Baker 1, respond with fire-rescue and ambulance to 1703 Maple for unconscious person.
Baker 1: Copy. En route.
Dispatch: Update info. Reporting party suspects drug abuse as cause.
Baker 1: On scene. Show me with contact with individual. They are out on the front lawn.
Baker 1: Advise fire and ambulance that I am giving the narc antidote.

The scenario above would’ve been unheard of a couple years ago, but is likely to become increasingly common as the public and its elected officials pay more attention to the numerous mainstream media stories about the increasing use and abuse of prescription opioid medications and the resurgence of heroin.

The phenomenon is neither geographically nor socioeconomically limited, and more often the proposed solution is to increase the availability of naloxone (Narcan) to any and all first responders–specifically to law enforcement officers, often a community’s first contact with opioid overdose victims after 9-1-1 services have been summoned.

The suggestion of law enforcement administration of naloxone is so prevalent that even United States Attorney General Eric Holder specifically promoted it as an answer to the very real challenge of opioid abuse and overdose, calling on “all first responders–including state and local law enforcement agencies–to train and equip their men and women on the front lines to use the overdose-reversal drug known as naloxone.”1

A Growing Epidemic
From 1991 to 2010 the annual number of prescriptions for opioids in the U.S. almost tripled, from approximately 76 million to almost 210 million.2 This has, in part, contributed to the significant increase in the number of people addicted to opioid medications. To combat this, states have taken many different pathways to decrease the availability and prescribing of opioids, such as state-organized prescription monitoring programs. In Oklahoma and New York, for example, physicians can easily access a prescription drug-monitoring program’s Web-based database and, within 60 seconds, determine what controlled substance prescriptions have been filled for any individual, including the exact name and quantity of medications received as well as which pharmacies and prescribers provided that medication.

In Vermont, state police will investigate any incidence of a reportedly lost or stolen prescription, and in many states it’s a misdemeanor to fail to tell a physician about controlled substance prescriptions. Tools like these have helped curb the number of people getting multiple prescriptions for the same narcotics in some states, but have had little effect in others.2

At the same time, heroin is reemerging as a common drug of abuse. In 2012, about 669,000 Americans reported using heroin in the past year, a number that’s been on the rise since 2007.3 Supply and demand governs the market, and currently oral opioids cost many times more than the same equivalent of heroin. 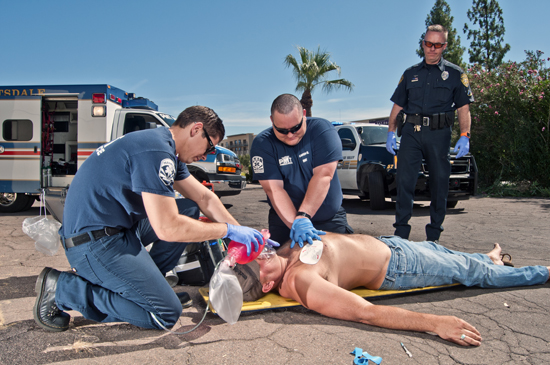 In the setting of a cardiac arrest, CPR takes priority over naloxone. Photo Matthew Strauss

The growing number of people addicted to and abusing prescription or illegal opioids–and subsequently overdosing–is a nationwide problem. It’s not just homeless drug addicts and heroin abusers; this problem affects people from all walks of life: kids experimenting with drugs; persons with chronic pain who take an increasing amount of pain medication(s), perhaps mixed with muscle relaxing medications or anxiolytics; returning soldiers with wounds from war; and patients suffering from cancer or other long-term painful conditions.

As a result of this well-publicized, increasing epidemic, naloxone, long-utilized by paramedics to directly reverse opioid effects, is now also being endorsed for administration by EMTs, law enforcement officers and even the general public through a number of state laws. In fact, as of May 15, such laws are in effect in at least 23 states and the District of Columbia,4 and enjoy clear federal support as well.

Community-access programs in cities like Chicago allow for third-party administration of naloxone for treatment of overdose and have resulted in a decrease in overdose deaths where implemented.5 Their success seems to be due to the educational programs teaching overdose avoidance that accompany the distribution of the drug, and not just the drug itself.

Law enforcement programs have also been developed. One of the first, in Quincy, Mass., has reported reversal of over 200 opioid overdoses since 2010.6 Several other demonstration projects have shown the ability to train and deploy naloxone via law enforcement professionals, most commonly in nasal atomization delivery to suspected opiate overdose victims. In New York state, for example, EMT-trained police officers have been credited with being the life-saving difference for multiple citizens.

We know opioid abuse is a reality leading to tragic consequences. We know public safety professionals besides paramedics are committed to improving the quality of life in their communities. We know that naloxone can be an effective therapy for patients who overdose on opioids. But is the answer as easy as putting naloxone in the hands of every police officer?

Naloxone, and specifically the administration of naloxone by law enforcement, is an answer, but is it the answer for your community? The answer to that question, from the view of experienced EMS physicians and paramedics, comes in the way you and your community answers the following questions.

The Right Treatment?
The physical symptoms associated with opioid abuse aren’t “one size fits all” in appearance. The primary effects of altered mental status and depressed respirations are found on a spectrum. On one far end of the spectrum, when a person has dramatically misjudged the potency or dose of an opioid, sudden cardiac arrest from a respiratory arrest occurs. In the setting of a cardiac arrest, what intervention is most rapidly needed? CPR–not naloxone.

In the absence of circulation, naloxone administered intranasally, or via any route for that matter, won’t restore respiration and circulation. In these cases, CPR and the use of an automated external defibrillator (AED) are the vital links needed to attempt to restore spontaneous circulation and neurologic function. This is all the more applicable in the single rescuer situation, as may occur most often in initial law enforcement response and patient contact. 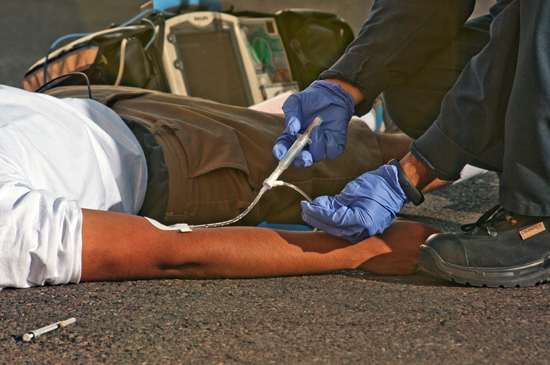 When an overdose patient is merely disoriented or mildly decreased in alertness but able to maintain an airway, administration of naloxone can precipitate the unnecessary onset of acute withdrawal. Photo Matthew Strauss

Opioid withdrawal is its own form of threat to a person’s health, at times causing serious physical stress, specifically serious hypertension, tachycardia, vomiting, diaphoresis, anxiety and agitation. The causation of avoidable opioid withdrawal is most often unappreciated and unacknowledged by naloxone’s strongest proponents–proponents that in many instances are without formal medical education.

The only indication for naloxone administration in the prehospital setting by laypersons, police, EMTs or paramedics should be opioid-induced respiratory depression or respiratory arrest. Refer to Figure 1 and Figure 2, below, for two medically-validated approaches for naloxone administration by public safety professionals not trained in a primary EMS role. These algorithmic approaches point out key assessment steps to take in deciding if naloxone is medically necessary. The first approach (Figure 1) also presents a dosage range recommended to stay within when administering naloxone.

Be sure and check with locally applicable regulations and authorities, including medical oversight physicians involved with your public safety agencies for specific instructions regarding the ability and specifics of naloxone administration. 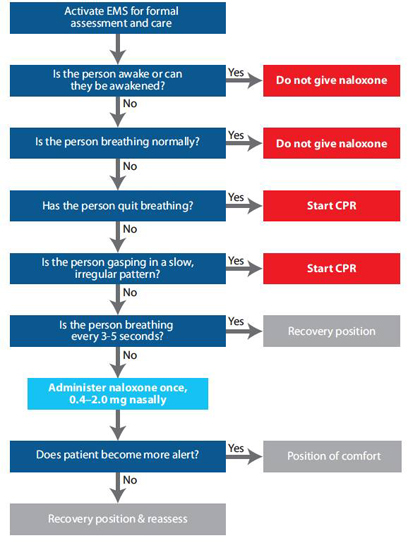 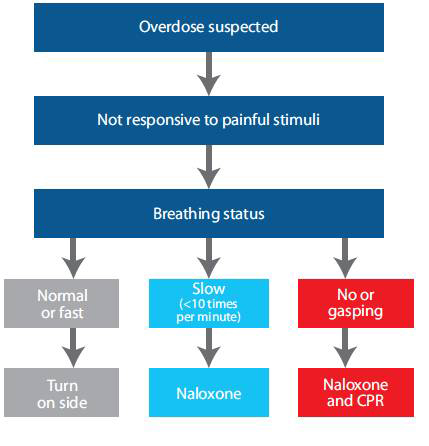 Necessity or Redundancy?
Do you have paramedics available in your community or coverage area? If so, what’s the typical paramedic response time from 9-1-1 activation until patient contact? And what’s the differential in time from the initial responder’s arrival?

In most of metropolitan America, paramedics typically respond and report patient contact or scene arrival time within minutes. Factoring the ALS response time realities in your area, is it likely EMTs, firefighters or law enforcement will be on scene long enough before paramedics arrive to reliably assess if the patient is suffering from opioid effects and prepare and administer a dose of naloxone? The sequence of assessment, preparation and treatment may not be realistically completed in less than 60 seconds, particularly by public safety professionals new to such procedures.

These considerations most likely equate with naloxone being a better fit for use in locales where paramedics are at long distances or times from opioid overdose victims, such as rural and suburban areas, specific locations in urban areas and other focused deployments.

Although certain areas of densely populated cities might be so defined, the reality is that rural county law enforcement agencies might prove the ideal agencies to adopt naloxone administration for greater use despite lower populations.

Fiscal & Operational Sense?
A 2 mg prefilled syringe of naloxone in most areas of the U.S. costs approximately $20. Although naloxone prefilled syringes won’t significantly impact most public safety agency budget needs, what about the cost and logistics necessary to place these naloxone syringes on every law enforcement vehicle, fire apparatus and BLS ambulance? What about replacement costs? Will the replacement need be due to actual use or a manufacturer controlled expiration date?

To make this worse, prescribing laws or regulations in many states could require the medication be assigned to each officer, rather than each vehicle like an AED. This can quickly create a serious fiscal hardship and operational boondoggle–a department that puts out 12 AEDs on a shift in its cruisers may have nearly 100 officers, increasing the tracking, purchasing, oversight and operational complexity by a factor of nearly 10. 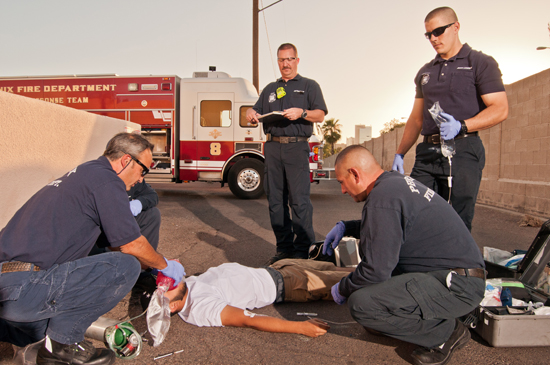 Naloxone deployment and administration protocols will differ for every community. Photo Matthew Strauss

We also have to consider how non-paramedic providers, especially police officers, will physically carry naloxone. Will it be placed in the squad car’s “front office” or be relegated as a rarely used item to its hot (or cold) trunk? Will it ever be carried on their person? This is unlikely given the extreme space limitations of an officer’s duty uniform.

In a system where BLS providers carry naloxone, would a clearly identified opioid overdose generate a paramedic response? For example, Boston EMS has been treating heroin overdose as a BLS call since 2006. Dispatch is designed to send the right units to the right calls at the right times, and BLS has been proven to be perfectly adequate at handling simple heroin overdose, increasing the availability of the ALS resources.

Drug Shortages
Many emergency care medications are in near historic low supply and have been in precarious availability over much of the past 3—4 years. Could a sudden surge in naloxone demand be met by sufficient increase in manufacturing and distribution capabilities? Will these capabilities not only meet the new demand, but also ensure current paramedic agencies and hospitals obtain needed supply? Given the current status of medication availabilities, doubts are well founded. 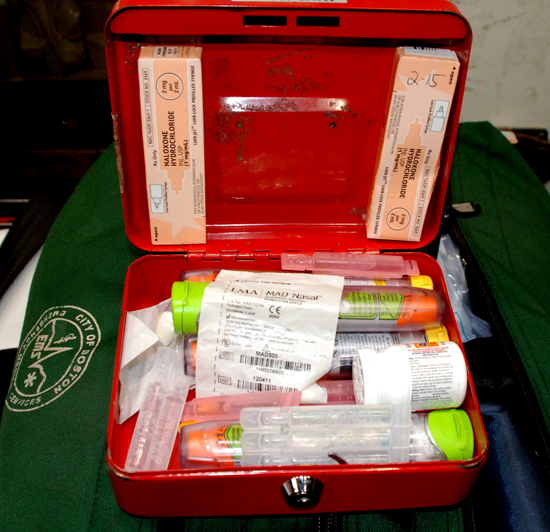 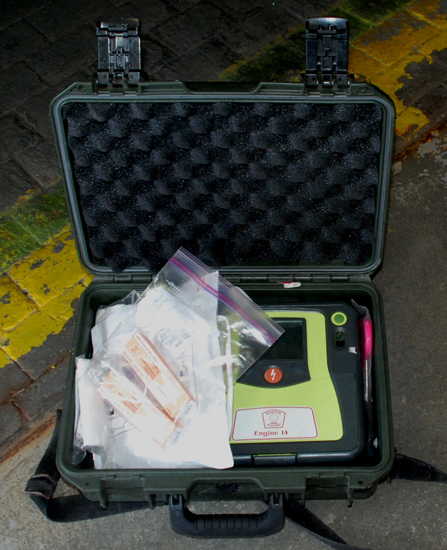 The Bottom Line
We don’t want readers to conclude that naloxone administration by non-paramedics is a bad practice–in fact that’s far from the truth. We do want you to consider all the facts about naloxone deployment and administration to realize that the right conclusion will differ from community to community.

We believe there needs to be careful, thoughtful discussion about this capability afforded by a growing number of state laws. What’s most important for a community wanting to effectively and realistically address opioid abuse needs is to first ask the right questions and let honest answers drive the decisions. The addition of naloxone to the equipment carried by any first response organization should be done based on the needs of the patient population and not on the needs of politics.

Whether you’re a physician, nurse, paramedic, EMT, firefighter, law enforcement officer or government leader, let’s collectively support a practice of good, safe medicine. Let’s be fiscally responsible in decisions that are paid most often with taxpayer monies. And let’s be realistic about what will or will not be a critical “difference maker” for a particular community.