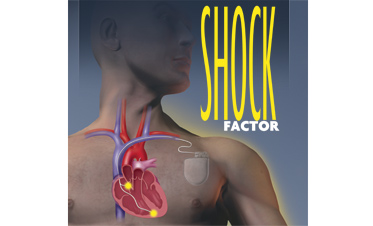 The paramedics arriving on scene found the 79-year-old man acting nervous but alert and oriented. The patient identified himself and said he had called 9-1-1 after his implanted defibrillator had fired 11 times. He denied having any chest pain, dizziness or shortness of breath before the ICD had begun firing. His lungs were clear, vital signs were within normal limits, and the cardiac monitor showed a 100% paced rhythm. A 12-lead ECG was performed with no unusual findings.

Further assessment of the ICD was conducted, and the patient produced an information card stating the ICD was manufactured by Medtronic Inc., and may have been one of the devices recently recalled by the Food and Drug Administration (FDA) due to lead malfunction.

The crew removed him to their ambulance. During transport, the patient received five additional shocks from the ICD as the paramedics were talking with him. The patient remained stable but said he felt uncomfortable, so he was placed on oxygen and given Versed for agitation. It was confirmed at the hospital that his ICD was one of the recently recalled devices.

The Benefits of ICDs
Patients with poor left ventricular function and survivors of prior cardiac arrest are candidates for ICD therapy. ICDs are typically used to prevent sudden cardiac death in patients at risk for ventricular tachycardia or ventricular fibrillation, but are also capable of pacing patients with bradycardic heart rhythms.

This process is intended to interrupt the abnormal rhythm and allow the heart to use its natural impulse center to restore normal rhythm. Immediate defibrillation before acidosis build-up and heart tissue death have been shown to decrease patient mortality.

Possible Defects
As with all devices, there’s a small risk of malfunction. In a study of 990 patients over 13 years, lead failures were identified in 15% of the study population. The incidence of lead malfunction increased over time, with leads 10 years and older experiencing a 20% failure rate. In the 15% of patients with lead failures, insulation defects were the top reason for complications (58%), followed by lead fractures (12%).

When a lead fracture occurs, the most common presentation, like the patient encounter previously described, is multiple inappropriate shocks. These shocks are painful, have the potential to induce lethal arrhythmias and can be extremely distressful psychologically to the patient.

On Oct. 15, 2007, the FDA issued a class 1 recall (the most serious) of some Medtronic Sprint Fidelis leads (Models 6930, 6931, 6948 and 6949). These devices were recalled due to reports of lead fractures associated with the deaths of five individuals. At that time, 268,000 Sprint Fidelis leads had been implanted worldwide. The recall halted the distribution of these leads, but didn’t include a recommendation to remove currently implanted leads. The risk of adverse effects from lead removal were thought to be higher than the risk of lead malfunction (1.4à7.3% versus 0.0018%).

All patients with the effected lead models have been notified of the potential for unexpected shocks, and physicians have been directed to reprogram the defibrillators to decrease the likelihood of inappropriate activation. The recommended reprogramming is intended to reduce oversensing, which triggers multiple shocks. It also has the potential to warn patients of a change in lead impedance. Despite these measures, patients continue to be at risk for sudden and repetitive shocks associated with abrupt lead fracture.

EMS providers who encounter these patients can use the information presented below as a treatment guideline, as it is for EMS agencies in St. Paul and Western Wisconsin. As always, please consult with your local medical director prior to implementing any of these recommendations.

Identifying Bad Shocks
It’s extremely important to immediately place a patient suspected of having an ICD problem on a cardiac monitor. The best and most reliable sign that an ICD is malfunctioning is theabsence of V-tach or V-fib on your cardiac monitor prior to the ICD firing. You must always assume the defibrillator is functioning correctly unless there’s proof from the cardiac monitor that the shock was inappropriately administered.

If the ICD firing has stopped by the time you arrive, two other pieces of information may help determine whether the firing was appropriate or not. If the patient has a Medtronic ICD with Sprint Fidelis leads, be more suspicious of a misfiring device. Patients with ICDs are advised to carry a card identifying their device, and they may be able to present this to you.

Another piece of key information to obtain during your assessment is whether any cardiac symptoms (e.g., palpitations, fainting, chest pain, diaphoresis) were presentprior to the first shock. If the patient wasnot experiencing any cardiac signs and symptoms, the possibility of inappropriate ICD shocks should be considered.

Treatment
ICDs are typically programmed (and occasionally adjusted) during standard follow-up appointments. In the case of repetitive inappropriate ICD shocks, prompt inactivation of ICD therapy is necessary for preventing pain and psychological trauma to the patient.

Donut magnets (see Figure 1), which are not standard equipment for many EMS crews due to their rare usage, can be used to temporarily shut off the shock-therapy functions of the device. Although it’s rare (for fear of improper use), some patients with misfiring ICDs have been provided a donut magnet by their physician and educated on its use. The average donut magnet is approximately 74 mm in diameter and can be purchased from Medtronic and most medical device distributors.

The pacing function for bradycardic rhythms will continue to work, even with the magnet in place. If your patient is receiving multiple shocks and V-tach/V-fib are not seen on the monitor prior to the ICD firing, placement of a donut magnet over the ICD throughout your involvement with the patient will prevent subsequent shocks.

If, at any time, you identify V-tach or V-fib on your cardiac monitor, remove the donut magnet; normal firing of the ICD will resume after approximately 15 seconds. Following arrival at the hospital, a formal interrogation of the ICD will likely be performed to identify the cause of the initial shock series, and device therapies will be programmed to off until the ICD lead is replaced.

Conclusion
Inappropriate ICD shocks are painful and stressful for patients. Using a donut magnet allows EMS providers to suspend the functionality of the devices when appropriate.

Magnet application suppresses shock therapy only while in place and doesn’t permanently alter ICD function. If V-fib or V-tach is noted on the cardiac monitor at any time, removing the donut magnet will allow the ICD to resume normal function and fire if appropriate. CPR and manual defibrillation should be utilized as dictated by the situation.

With the appropriate training, equipment and medical oversight, EMS personnel can help prevent further discomfort for these patients through use of a donut magnet in the prehospital setting. Medical directors should strongly consider the need for ALS units to obtain and carry a donut magnet to control malfunctioning ICDs if confronted with one in the field.