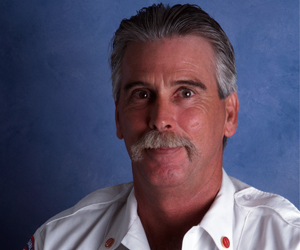 The day John Curry, Jr.’s mother had a stroke changed his life forever. The 29-year EMS veteran called on all the colleagues he knew to help get his mother the immediate treatment she needed to address her ischemic stroke. She made it to the hospital with just five minutes to spare–five minutes that ultimately saved her life and returned her to normal function.

Although the EMS coordinator for Coral Gables (Fla.) Fire Rescue Department was grateful to his colleagues for saving his mother’s life, the episode left him unsettled and looking to do more for stroke victims. “I made a promise to my mother that if she recovered, I would fix the way we treat strokes,” he says.

A Better Way
The incident also left him wondering how other people affected by stroke, people who did not have a direct channel to the EMS community, would fare in the situation in which he found himself. “All the people I know in EMS, and my mother made it by just five minutes,” he says. “If this is me, engaging all the  people I know, what does the normal person get? We can do better than this.”

That better way turned out to involve the Fire Officers Association of Miami-Dade Consortium (FOAM-D), of which Curry is the EMS committee chair. At the time of his mother’s stroke in 2005, the consortium, comprised of six jurisdictions, had languished. That all changed when Curry told the committee he wanted to focus on strokes. Specifically, he wanted to do something deemed radical at the time: Send primary stroke patients to primary centers and send big stroke patients to comprehensive stroke centers, even if it meant bypassing primary centers. The committee threw all of its support behind Curry and his stroke initiative.

“We thought people would be better served if they were having a large stroke or bleed at a comprehensive center,” he says. “And we set out to accurately define that in the field. We wanted to determine who went where.”

Developing a Strategy
The committee developed a unique, two-page checklist, called the Cincinnati Stroke Scale, which is being modified for the National Institutes of Health (NIH) simplified stroke scale. “The first page tells if someone is having a stroke, and the second page tells how big of a stroke and the destination criteria,” he says.

Once the checklist was finalized, the real battle involved defining destination criteria. “Anytime you mention that you are going to bypass a primary stroke center, and transport to a comprehensive stroke center, that’s political and can cost hospitals money, especially if you don’t do a good job in the field,” Curry says.

So instead of engaging in the usual political conflicts, Curry created an ad hoc committee of FOAM-D, composed of members of his committee and the interventional neurologists from the seven surrounding hospitals. He called an initial meeting with the surgeons to tell them about the idea of the destination criteria and to get their feedback–and buy-in–to FOAM-D’s proposed criteria. Without their support, the initiative would founder and probably fail.

Curry wanted to make sure the committee avoided getting slowed down with too many voices. “I didn’t want to have of lot of people, and the heavy hitters, the cream of the crop, are the interventional neurologists,” he said. So Curry decided to talk to the interventional neurologists for their opinions and feedback. “I went
right to the top. My focus was on how we call out comprehensive strokes.”

When he first met with the surgeons, Curry thought they would “chew him up.” Instead they greeted him with open arms. “They told me, “˜We have been waiting for a guy like you to come along and push this agenda,'” he says. “”˜Our administration would never do it without the push from EMS.'” Part of the initial
success of the coordination of the group was the realization of the power that EMS holds with the transportation of patients. “Eighty-five percent of a hospital’s stroke intakes come from fire/rescue,” Curry points out.

The surgeons helped develop prehospital and out-of-hospital criteria. With that in place, the committee drew up airtight contracts with the hospitals. “It was well thought out by everyone,” Curry says. “[The contracts] include inter-hospital transfers and how to track and report data points.”

Cultivating the Program
All the work has resulted in a first-of-its-kind network, the only one in the nation that bypasses primary stroke centers and goes to comprehensive stroke centers based on EMS and hospital stroke criteria. “When we call from the field, the hospital has to activate,” says Curry. “When we pass through the emergency room, the patient has to be seen by a neurologist within 15 minutes. If it’s an ischemic stroke at a primary, they have to push the tPA within an hour, 90% of
the time.”

Curry adds, “The hospitals voluntarily sign into the network. We track  compliance, and if the hospitals don’t comply they are considered out of network.” If there are issues, the problems are worked out with the hospital CEO, and corrective action plans are drawn up and put into place.

The stroke initiative has had what Curry calls “growing pains,” but has, nonetheless, been successful. The concept is now being adopted by Palm Beach (Fla.) EMS, and Curry hopes that one day it will migrate across the nation, particularly given the prevalence of stroke. “There are roughly 4,000 critical strokes a year in our area alone,” Curry says. “Eighty-five percent of those are small strokes that can go to a primary stroke center. But 15% need to go to a comprehensive stroke center.”

He adds, “We wage these battles here to beta test, to prove that the theory does work. We do it so other communities, with only a couple of hospitals, can have the tools to definitively diagnose someone who has a one-in-a-million shot of  surviving and take them to the correct facility.”

Funding for the stroke initiative comes from the hospitals. In addition, the  committee wrote a grant to secure the money to hire a data manager. Currently, the data is being collected on a server, and the manager will begin extrapolating the numbers and report the impact of the program. That report is being compiled now and results are expected over the next few months.

After developing the strategy of defining destination criteria for strokes and  creating the system in his community for transporting stroke victims to either primary or comprehensive stroke centers, Curry and his FOAM-D committee are now working on Phase II of the program. This involves training eighth-graders how to spot the warning signs of a stroke, particularly in their parents and grandparents. It’s an ambitious undertaking but the kind of challenge that John Curry seems to be attracted to.

“We are looking at it as a kind of train-the-trainer program where we will teach eighth-graders about the signs and symptoms of stroke, and then they can go back and teach their parents and grandparents what to watch out for,” Curry says. “Eighth-graders are easy to train; they are enthusiastic, and they care about their grandparents.”

Additionally, FOAM-D is running public service announcements on TV and is planning to create and pass out literature and refrigerator magnets on the signs and symptoms of stroke for the general public to have in their homes.

The Right Thing
What lies at the heart of this entire stroke initiative, and indeed all the work John Curry has done over his lengthy EMS career, is a desire to do the right thing. He sees himself as the guy who says, “Why can’t we do this? Why can’t we do that?” It’s a philosophy that has no doubt rubbed some the wrong way, but it’s also a philosophy that has absolutely saved many lives. “If a doctor says to me, “˜You don’t know what you’re talking about,’ I go to someone else,” Curry says. “I want to do the right thing because it’s important to me. I want to see people live a healthy life.”

That doesn’t mean that he didn’t have his doubts, especially early on, about just what the right thing really meant. Then he met a man in trouble out on an emergency call and tried to save his life. Despite Curry’s efforts, the man died. Curry shared his doubts with a physician about working so hard on someone who died anyway. The doctor told him, “Your job is to give these people a one-in-a-million chance to survive, and that’s what you did. So hold your head high.”

Curry has done so ever since. He has spent his career pushing the barriers, considering the alternatives, and asking why or why not. And his mother couldn’t be prouder of him.