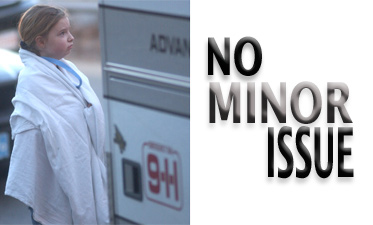 The issue of patient consent is confusing enough, but when it involves minors as patients it can become even more difficult. It’s important to remember at the outset that minors have no status under the law: That means they can’t legally consent to treatment or legally refuse it. In general, the term “minor” applies to anyone who hasn’t reached the age of majority, usually age 18. There are some exceptions to this general rule.

Any time an EMS crew encounters a minor who has a life-threatening illness or injury, they should initiate care under the principle of implied consent. Generally, consent of a parent or legal guardian is required to begin medical care for a minor. If, for example, a child is out playing with friends and sustains a minor injury for which EMS is summoned, it’s best to make every attempt to contact a parent or legal guardian before initiating treatment. Cell phones and electronic communications devices have made the task of contacting a parent much simpler than in the past. Remember, aunts and uncles, grandparents or mom’s boyfriend can’t consent for the child’s care. If you regularly care for a child who is not your own, you may want to consider having the parent execute a power of attorney that permits you to consent to medical care for that child when they are unavailable.

Some states have statutes allowing persons to act “in loco parentis” — in place of a parent — under given situations. This is usually called for in the school setting: If a child becomes ill at school, they will generally be cared for under this principle. Check your own state’s law to find out if your state recognizes this legal principle.

The case of the emancipated minor is another confusing situation for EMS personnel. Again, what constitutes emancipation is a matter of state law. Most states recognize some form of legal emancipation, if only by court order. Minors who have been emancipated by court order are usually savvy enough to carry a copy of the court order with them. Some states recognize additional means of emancipation, such as active service in the armed forces and marriage. Pregnancy alone will not suffice for emancipation of a minor. In situations where a minor gives birth to a child, she may still be a minor under the law.

Refusal of medical care for a child by a parent or guardian is another difficult situation encountered by EMS personnel. Parental refusals of medical intervention are most likely to be upheld where the child’s condition is not life threatening and particularly when the treatment may expose the child to some sort of risk. Courts, however, are notoriously unwilling to intervene, sometimes even in the most serious of cases. Most states have criminal statutes defining when refusal of needed medical care for a child constitutes some form of child neglect or abuse. When a parent’s refusal to provide medical care is deemed egregious, criminal liability may be found. Religious beliefs may not provide a defense in this situation and ultimately pose difficult legal cases involving tension between our First Amendment rights and our cultural imperative to protect minors. With few exceptions, all states have some sort of religious exemption to child abuse and neglect laws.

Any time an EMS provider suspects child abuse, they should act in the best interest of the child. We know that between 2,000 and 5,000 children die each year as a result of intentionally inflicted injuries, although reliable statistics are hard to find. In most states, EMS is mandated to report suspected child abuse, and most states provide that failure to report child abuse can result in criminal prosecution.

Although courts are more than willing to uphold an adult’s refusal of care for themselves, they’re much less willing to support a parent’s refusal for a child’s needed medical care. The principle of “parens patriae” allows the state to intervene to protect an individual who is unable to make decisions in their own best interest. This doctrine also permits courts to consent to treatment when parents are unavailable.

Certain public health measures enacted pursuant to the states’ police power may be upheld despite parental objections. The two best examples of this principle are the vaccination of school children and fluoridation of water supplies. The recent swine flu pandemic has spurred school closings to slow the spreading of the virus. Preservation of the public health is well within the power of state governments, which will often mobilize resources to handle disease outbreaks specific to their area.

Transport of an ill or injured child may be the most appropriate course of action when a parent can’t be contacted from the prehospital setting. Children should not be left on scene after an EMS call because of inability to contact a parent. When faced with difficult situations involving minors and consent, don’t hesitate to contact your supervisor or chief officer. Your on-line medical control can also provide assistance when you’re on scene. Continue to have your communications center make every effort to contact a parent or guardian. Many complaints by parents regarding EMS treatment and transport of their children without consent are centered on the question of who pays the bill when the parent did not authorize the transport. Whether reimbursement will be paid should not concern you; let the minor’s medical needs be your guide to the best care.