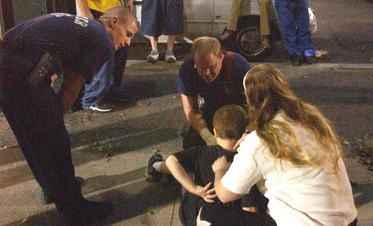 Sixty-one caregivers recalled all 3 time intervals. The mean call time was 6 minutes (range, 1-25 minutes), and the mean total time was 33 minutes (range, 12-72 minutes). The time interval closest to the emergency event, the call time, was underestimated by the caregiver in 11 cases (18%), was exact in 8 cases (13%), and was overestimated in 42 cases (69%). The caregiver’s estimate was within 1 minute of the EMS recorded call time in 30%, the scene time in 18%, the transport time in 33%, and the total time in 15%. There was no association of caregiver accuracy with the self-assessment of stress level.

They concluded that caregivers recollection of the ambulance time intervals during their child’s illness was generally unreliable. If used as a marker for the caregiver’s perception of the passage of time during a stressful event, these data suggest that interval estimates alone should not be used to guide management.

The Street:
Many misperceptions by the general public relate to their belief that it took longer than expected for the ambulance to arrive. This study confirms what most of us understand — time slows down and also flies by during times of crisis. It s like the old saying goes, A watched pot never boils. This is because our perception of time changes when we attempt to measure it.

While the results of this study are not surprising there are important implications for us in EMS. First, services that survey their patients for customer satisfaction should consider providing the actual times of for response, on-scene care, and transport and then ask the patients whether or not they were satisfied with the services response.

Secondly, this information should be taken into consideration when dealing with an upset parent s complaint that your ambulance did not arrive soon enough. I m not suggesting that you tell them Hey look, studies show you can t tell time when you re under stress – but instead you should use this knowledge to help you provide a measured response and recognize their perception of reality. You will have to deal with it in a diplomatic way by tactfully providing them with the actual times and expressing your appreciation for their concern.