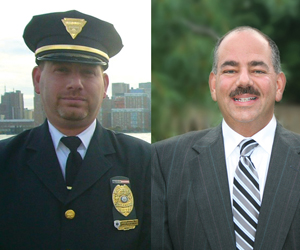 The first thing that might catch you by surprise when you watch Driving Responsibly: The Truth about Sirens (www.monoc.org/sirenPSA2.cfm) isn’t the quality of the video, the camera angles or editing (professional though they are). No, the first thing that might surprise you is the following statistics: 1) EMS responds to 30 million calls annually, (2) research shows that the use of lights and sirens has little impact on patient outcome, (3) there are 10 serious EMS injuries every day and 10,000 ambulance crashes a year, and (4) EMS providers are killed annually at twice the national average of non-EMTs.

“We started looking at injury and fatality rates when it comes to ambulances, and they were pretty staggering,” says Scott Matin, MBA, NREMT-P, vice president, clinical education and business services for Monmouth Ocean Hospital Service Corporation (MONOC) Mobile Health Services in Neptune, N.J. “And [the reported incidents are] probably only a fraction of what’s really out there.” So Matin, along with Peter Dworsky, MPH, CBRM, NREMT-P, corporate director of support services for MONOC, decided to examine ways to improve safety for EMS providers.

Gathering Evidence
Given the lack of a central clearinghouse for monitoring and data collection for EMS-related vehicle accidents, Matin thinks the estimates may be low. “It’s not like the commercial trucking industry, which is monitored closely,” he says.

Regardless of whether the estimates are low, the central fact remains that too many EMS providers are injured or killed in high-speed emergency calls. So MONOC decided to take a look at one piece of the puzzle: the role that the use of lights and sirens play in the accidents.

The decision to look more closely at the statistics, and what’s behind them, is entirely appropriate. MONOC is the largest non-profit provider of EMS and ambulance services in New Jersey, and part of its mission is to develop and implement best practices that can affect change, not only at MONOC but also throughout the national ambulance industry.

Matin and Dworsky took on the challenge of investigating the ramifications of siren use during EMS calls. “We monitored collisions around the country, and we looked at our own practices and saw that things needed to change,” Dworsky says. “We looked at research that shows that EMS providers are being severely injured or killed during collisions, and most of the collisions appear to be preventable.”

Questioning Lights & Sirens
The gathering of evidence around clinical practices and collision rates convinced them of the need to develop an educational piece around the issue. “We wanted to do something to change driver behavior and get people to slow down and not use lights and sirens when not necessary,” says Dworsky.

What the two came up with is an innovative video that has created industry buzz–and controversy–for EMS. Asking EMS agencies across the country and around the world to limit their use of lights and sirens, except in the case of transporting only the most critical of patients, is nothing short of a paradigm shift, but that is what Dworsky and Matin are doing. They recognize that they’re attempting to change a deeply ingrained culture for providers who were raised on lights and sirens.

“There is research out there that shows you only save a couple of minutes at most if you use lights and sirens,” says Matin. “We know from practicing prehospital medicine that those few minutes you save with lights and sirens will make little difference to most people.” But the risk to EMS personnel of being injured or killed in a siren-driven ambulance run to a scene or hospital is present on every call.

Still, Matin and Dworsky understood that trying to undo decades of thinking by sending the message to limit sirens to only the most critically ill patients wouldn’t be easy. They realized that to be truly effective, they would need the message to be visual. A short video, they correctly guessed, would have the most impact.

Culture of Safety
So Matin and Dworsky developed a six-minute video and then added a two-minute experiment at the end to illustrate their point. To see the outcome of the experiment, you will have to watch the video. “We thought that using a video would attract attention,” Matin says. “We also thought the experiment would make people think twice.”

Dworsky says they developed the video as another tool to get EMS providers to adopt a culture of safety. “We’ve been addressing seatbelt issues, airbags, supplemental restraints, mounting systems and driving patterns for years. The video is just another method for changing driver behavior and addressing vehicle safety,” he says. “We are moving toward evidence-based medicine in EMS, so here is evidence-based research on how to change driver behavior–and why to change it.”

The ultimate message of their video is: Simply going faster is not the solution. “Just because you get to the hospital faster, it doesn’t mean the patient is going to get seen any sooner,” Dworsky says. “You don’t make up time by driving faster. You make up time by getting out of the door sooner. “

Dworsky adds, “We do ask our staff to use lights and sirens when appropriate, and to notify the hospital that they’re coming in with a critical patient.”

Changing Requirements
As part of their mission of cultural change, Matin and Dworsky are working with contract managers in towns and cities in New Jersey to change the performance requirement wording in contracts between EMS and hospitals. Rather than a contract stating that EMS will respond to 90% of calls within eight minutes, they want contracts to read that EMS will respond in eight minutes or less to priority calls. “Otherwise, you are forcing us into a situation where we are required to speed and exhibit reckless behavior to maintain a performance requirement in a contract that has a negative outcome for the patients,” Dworsky says.

Certainly most EMS agencies are driven by performance requirements, but Matin argues that many of those numbers are arbitrary. “There’s nothing to support those numbers,” he says. “A lot of people still use them because there isn’t anything out there that says otherwise. Things have changed dramatically in practicing prehospital medicine.”

Matin points out that today’s modern ambulances can provide just as much medicine in the field as many EDs. And he argues that the urgency of using red lights and sirens while driving many non-critical patients isn’t necessary.

Dworsky adds: “Some people think that when they put their uniform on, they have to put on their cape and get there really fast. Getting halfway there fast and then getting into an accident doesn’t help anybody,” he says. “If we do that, we are violating our Hippocratic oath of “˜First do no harm.'”

Final Experiment
Of everything shown in the video, the two are most pleased with the setup and execution of the experiment at the end. “We worked hard to make sure that the experiment would be legitimate and accurate,” Matin says.

When finished, Dworsky and Matin made a big push to advertise the video to the worldwide EMS community. They wanted the information freely available, so they put the video into the public domain. They posted the video on the MONOC website (monoc.org), numerous EMS message boards, social media sites and distributed it to listservs. They even emailed the link of the video to 10,000 people.

Driving Responsibility: The Truth about Sirens has now been downloaded and viewed by people and associations throughout the U.S., Canada, Europe, the Middle East and Australia. “It doesn’t matter where you’re at,” Matin says. “EMS agencies worldwide experience the same problems.”

In the end, Dworsky and Matin simply want others to spend a few minutes watching the video and thinking about its message. “We can do great things with ambulances by bringing people to the hospital, or going to the scene, but at the same time terrible things can happen,” Matin says. “If there’s anything that we can possibly do to minimize that, I think it’s our responsibility as professionals and career EMS providers to do it.”