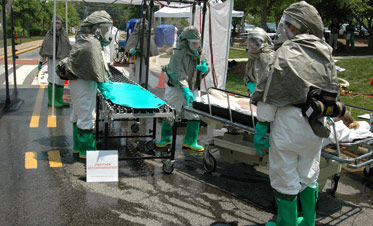 In February, federal investigators closed their investigation of the 2001 anthrax attacks that killed five people and sickened 17 others, concluding that Dr. Bruce Ivins — a biodefense researcher at the Army’s Medical Research Institute of Infectious Diseases — acted alone in the attacks. (Ivins committed suicide in 2008.) Nearly nine years after this incident, is the U.S. any better prepared to recognize, respond to and recover from a biological weapons attack?”ž

“The lack of U.S. capability to rapidly recognize, respond and recover from a biological attack is the most significant failure identified in this report card,” the report states. “Unfortunately, there is no national plan to coordinate federal, state and local efforts following a bioterror attack, and the United States lacks the technical and operational capabilities required for an adequate response.””ž

The commission finds the U.S. “seriously lacking” in its ability to provide:

They also found “especially troubling” the “lack of priority given to the development of medical countermeasures — the vaccines and medicines that would be required to mitigate the consequences of an attack.””ž

Likewise, the report wasn’t particularly noteworthy to Jerome Hauer, who has a long history in emergency management and medical/public health planning and response to emergencies. Hauer, now chief executive officer of the emergency management consulting firm The Hauer Group, served as the first acting assistant secretary for the Office of Public Health Emergency Preparedness under Health and Human Services Secretary Tommy Thompson and, previously, as New York City’s first director of the Mayor’s Office of Emergency Management under Mayor Rudy Guiliani. He also has EMS roots in Indiana, where he served as the state director for EMS.

“We are a nation that becomes very complacent and very forgetful very quickly,” Hauer said. “I don’t think what the commission did was shattering. If anything, it reinforced the fact that we have more work to do, and I think [HHS] Secretary Sebelius is doing that.””ž

Although he agrees that progress is needed, Hauer doesn’t believe the abysmal “F” grade is warranted. Our greatest need, he said, is real-time biodetectors, and we’re making significant progress on this front. He said the report does not discuss the good work going into developing real-time biodetectors in places like Sandia National Laboratories, Lawrence Livermore National Laboratory or the Department of Defense (DOD).”ž

Although he acknowledged that we don’t yet have medical countermeasures for every biological event, he was dismayed that the report also didn’t acknowledge the “extensive work going on for a lot of biological threats at the National Institutes of Health. In time, we will see new countermeasures for anthrax and other biological threats — tularemia, plague, botulinum. HHS has been doing a lot of work to deal with these issues.”

Hauer also noted the report’s failure to cite the Strategic National Stockpile as an effective means to distribute medical countermeasures to biological events, as well as the fact that an improvised nuclear device is arguably an equal or even greater threat than biological weapons. “It’s clearly an uninformed grade that really lacks any substance behind it.””ž

There is one area where both Hauer and Maniscalco are in complete agreement: The nation will never be prepared for a biological or any other WMD event until EMS gets the consolidated national recognition and funding it deserves and desperately needs.”ž

Case in point: Despite the fact that EMS personnel would be on the frontline of a biological event response — and that funding, training and coordination of first responders remain significant issues — “local efforts” is the closest the report comes to addressing EMS’s role in readiness.”ž

“What I find fascinating on the biological risk — which is where they give a damn — is they do not mention the whole issue of hospital surge capacity or EMS surge capacity,” Hauer said. “If they want to give something an à‚F,’ they should have focused on the fact that we have not yet recognized EMS as a critical part of the response to bioterrorism, chemical terrorism, nuclear terrorism,” he said. “It’s very frustrating.””ž

The report seems to reflect a pervasive federal disinterest in emergency medical services.”ž

“The folks on the Hill don’t recognize EMS,” Hauer said. “Part of the problem with living inside the Beltway — the members of Congress have their own private ambulance service, their own doctors, paramedics, response capability. So, it’s not an issue that’s near and dear to anyone’s heart.”ž

“There are no real credible spokespeople for EMS that have the political leverage to get their governors involved, to get their members of Congress involved.”

“As cited in earlier panel reports, the lack of any fiscal assistance to enhance EMS response capability, especially for combating terrorism, must be addressed. To reduce mortality and morbidity, especially in the aftermath of a CBRNE terrorist attack, investment in the response component that is tasked with turning victims into patients is critical. Concurrent with the lack of specific funding is the continuing absence of a Federal entity that provides guidance and assistance on a daily basis to EMS responders nationwide.””ž

The commission’s recommendations have fallen on deaf, or perhaps politically impotent, ears. Nearly seven years ago, they suggested that Congress:”ž

Yet today there’s still no “specific agency across the federal landscape that is charged with the single responsibility of EMS operations,” Maniscalco said. “That would be research and development for safety and innovations, strategies, tactics, response safety, management systems — similar to what we find in law enforcement or the fire service. We don’t have that.”ž

“It’s more important for us to have a fully fundedÆ’with a Congressional charter mandateÆ’agency or administration that is charged with managing these efforts and advancing the science than it is to argue about what agency it should be billeted in, because then you miss the point, and you set the stage for people to steal your argument and delay the progress that’s needed.””ž

The lack of a single Congressionally mandated agency or administration for EMS means the dollars for biological weapons preparedness and other WMD readiness are simply not going to flowÆ’at least not in adequate amounts.

“The Consortium in the University of Hawaii and the Pacific Rim Territories University, for the 10th or 11th year in a row, received a $10 million budget grant from the U.S. government to continue their study of the migratory and reproductive habits of Flipper. àš How much is the EMS budget under Drew Dawson’s [NHTSA EMS Division]? $2.6 million. It’s the same old story with EMS. EMS owns this problem.””ž

Both Hauer and Maniscalco expressed the importance of local and state EMS agencies voicing their concerns to their local, state and national representatives.”ž

“Without a strong voice from EMS, we continue to get shortchanged,” Hauer said. “EMS continues to be treated like a stepchild.””ž