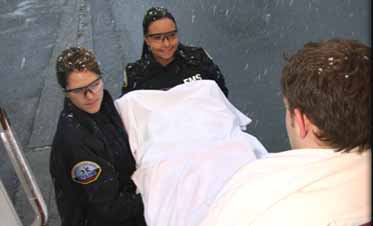 Todd and I were dispatched about mid-afternoon for a “possible 10-0” which, at least according to the interpretation of the Ten Codes in North Central Ohio at the time, meant “dead body.”

We responded to an assisted living facility in town, shut down the lights and siren before entering the complex and parked by the back entrance. Dutifully we piled all of our gear onto the cot: O duffle, LifePak 5 (yes, it was that long ago!), drug box (yes, it was a tackle box), suction and jump bag and trundled into the building. A lady from the staff led us down the hall to a room. The door stood ajar.

One glance eliminated the “possible” as a prefix to the “10-0.” Experience teaches that it is far more likely that a dispatch for something else will end up being a 10-0 than a 10-0 will end up really being something else. Here, grandpa was lying on the neatly made bed in his neatly kept room. He was well groomed, dressed in a flannel shirt tucked into his grey trousers. A clean, white t-shirt was visible above the top button of his shirt, and he had on a black leather belt. His black shoes were shined, and his legs were crossed. Thin, veined hands rested on his chest, fingers interlaced. His eyes were closed, as was his mouth. It looked as if he had stretched out for an afternoon snooze, and simply failed to wake up.

At that time we had a policy in place requiring that every body to which the ambulance responded be transported to the hospital. It was a bizarre, wasteful and even cruel policy, but a policy nonetheless. In this case, the indignity of this unnecessary transport to the hospital was compounded by the undisciplined, adolescent behavior of the crew — that is, Todd and I.

The room was very small, and we couldn’t get the cot alongside the bed because there wasn’t enough room between the bed and the wall. We undid the straps and lowered the cot to bed level. I moved to the head, and Todd was at the feet. I planned to grab the gentleman under his arms, and Todd would support his legs as we moved him to the cot. He was quite thin, and so it should have been an easy move. Todd placed his arm under his legs and lifted. Our gentleman tilted up like a teeter-totter. When I lifted him by the shoulders, he was even lighter than I expected, and was stiff as a two-by-four. His unexpected weight and rigor caused us to almost throw him across the room, but we managed to pull him back onto the cot prior to liftoff. We looked at each other in shock. I don’t know whether it was the surprise, the look on our faces, the situation, or all of the above, but we lost it.

The more we tried to hold it in, the worse it got. The more we tried to control ourselves, the funnier it became. Todd had to close the door so our guffaws wouldn’t be heard by the curious residents down the hall. Every time we tried to move him, our paroxysms rendered us helpless. Finally, we managed to get him on the cot. Both of us were in tears by now.

It probably took us five minutes to finally get this gentleman transferred to the cot and strapped in; then another five to get ourselves under enough control to move to the ambulance without actually cackling out loud. I think we managed it, although I know there were a couple of times we had to hide our faces in our shirts or the crook of our arms on the way out. Once outside, I could see fingers behind windows prying blinds or curtains apart to peek at what was going on.

I do not know whether anyone actually heard us or saw us. I do know that the expected, dreaded call from our supervisor never came. I also know that as much as we were aware of the inappropriateness, callousness, irreverence and unprofessionalism of our behavior, like giggly kindergartners, controlling ourselves was not an option.

Whenever I see responders behaving on scene in what appears to be an insensitive manner, I think back to this call. We get so used to situations that are, for other people, tragic, horrible, scary, and even sacred, that it is often difficult to maintain the decorum the public expects. What for us is routine can be the worst day in the lives of our patients or their families. Of course it’s important to be vigilant and aware of how we appear to the public. At the same time, some things are just, well, funny, and without a sense of humor, a medic’s career will be a pretty short one.