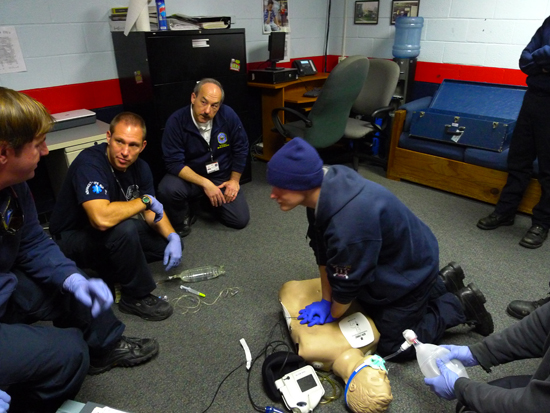 If you log on to the Howard County (Md.) Department of Fire and Rescue Services’ (HCDFRS) website, you’ll find the agency’s core values, which say, in part, that the service will “create and maintain an environment of individual safety, well-being and trust.” These are values that the nearly 900 career and volunteer providers of Howard County take seriously and try to maintain every day of the year.

To this end, the service wanted to improve cardiac arrest survival rates in their county. So in 2010 the HCDFRS sent three people to the Resuscitation Academy in Seattle, overseen by Dr. Mickey Eisenberg, to learn why Seattle has such a renowned reputation for high cardiac arrest survival rates. Dr. Kevin Seaman, FACEP, medical director for HCDFRS, was one of the attendees, and the ensuing partnership with Seattle and Dr. Eisenberg would prove to be pivotal for both Seaman and Howard County.

Cardiac Arrest Program
“My task was to review our cardiac arrest rates, collect data and begin to furnish feedback to providers,” Seaman says. In fact, what Seaman and his team did was take what they learned in Seattle back to Maryland and begin to craft and champion a “boots on the ground,” firefighter-led comprehensive cardiac arrest campaign that has had significant impact on EMS providers and community residents, within the county and beyond. The critical elements were training providers in high-performance CPR, equipping police with automated external defibrillators (AEDs), measuring performance and giving feedback to providers.

To initiate such an expansive program, Howard County, which serves a population of 350,000 people over an area of 262 square miles, reviewed their performance around cardiac arrest survival and knew they could improve. Paramedics and firefighters worked through many challenges and collected data in the Utstein template, the standard for cardiac arrest reporting. The program required developing treatment protocols, creating community CPR training, revising instructions and education for dispatchers, and fostering a culture of code resource management. Seaman’s leadership, coupled with field provider dedication, has resulted in the increase of survival to hospital discharge from 19 to 47%, one of the best rates in the country.

Seaman, with the Maryland Institute for Emergency Medical Services Systems (MIEMSS) in partnership with the Seattle Resuscitation Academy, developed the Maryland Resuscitation Academy (http://ramaryland.org). “The idea is to spread information and education on how to improve cardiac arrest survival in your community,” Seaman says. Dr. Robert Bass, executive director for the MIEMSS, recently asked Seaman to lead the state’s steering committee on cardiac arrest survival. 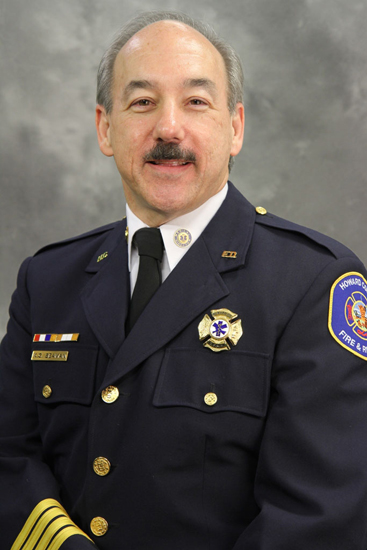 “The real value is in educating our students and community leaders,” says Seaman. “We have trained 13,000 residents in CPR and AED, including 9,000 students. We need our residents to recognize the signs of cardiac arrest, understand how critical time is, begin bystander CPR and don’t stop until we get there. We are also working with dispatchers to develop a curriculum to recognize the signs of cardiac arrest and aggressively coach bystanders or callers in hands-only CPR.”

Under Seaman’s leadership, and with the hard work of every member of HCDFRS, the organization is now recognized as a Mid-Atlantic and East Coast site for high-performance CPR. Both suburban and rural agencies in these areas have come to Howard County to receive education and training on how to implement their own high-performance CPR programs.

Improving Intubation
Dr. Kenneth Rothfield, chairman of anesthesiology at nearby St. Agnes Hospital, perceiving an opportunity to improve field intubation success, contacted Seaman and the two agreed to work together. Dr. Rothfield had earlier instituted a program at the hospital in which ED and intensive care physicians, anesthesiologists and respiratory therapists were trained in intubation using the GlideScope video laryngoscope. Rothfield wanted Howard County EMS to consider using the GlideScope, which is easy to learn and use, and doesn’t interfere with compressions during intubation.

Howard County developed a protocol and research study to implement and track the efficacy of using this video laryngoscopy, the first jurisdiction in the state of Maryland to develop such a study and protocol. The study trained and followed 120 paramedics who used GlideScope on manikins, out in the field and in the hospital operating room. At the conclusion of the study, Seaman learned that the rates for intubation success jumped from 64 to 87% using GlideScope. “We concluded that by using video laryngoscopy, not only can you achieve better success but you also can intubate without compromising the quality of CPR, which we know is one factor that really influences cardiac arrest survival,” he says.

A critical discovery was that the learning curve to master video laryngoscopy was significantly shorter than conventional techniques. “A paramedic student needs 15—20 direct laryngoscopy intubations to reach a success level of 80-90%,” Seaman says. “With the GlideScope, following didactic and manikin education, they only need one or two intubations in the OR to get to the 80—90% success rate.”

Seaman initiated the GlideScope program through this partnership and the devices were put on all ambulances in Howard County. This effort resulted in the increase of intubation success mentioned previously. However, a major challenge was cost. Video laryngoscopy can cost from a few hundred dollars to approximately $10,000 each. Some feel the cost is just too much for an agency to bear. For those who feel the units are too expensive, Seaman has a thought-provoking inquiry. “I understand budget constraints and know some feel they cannot afford it. But given the improved outcomes, I would ask: “How can you afford not to do it? Do you know your intubation success rate?'” He asks agencies to keep in mind that with developments in technology, there are a variety of video laryngoscopes available at various price points.

Increasing Awareness
While many in the EMS community are focused on cardiac survival as a part of their job, prehospital care–and cardiovascular disease in particular–is personal to Kevin Seaman. His mother died of the disease and he wants to find better ways of not only treating cardiovascular problems, but also preventing them altogether.

In terms of the educational effort Howard County has made, Seaman hopes the awareness around cardiac arrest survival will become a priority in the community–particularly the message that cardiac arrest is survivable and preventable. “Cardiovascular disease is the number one killer in Howard County. It’s the number one killer in Maryland. It’s the number one killer in the United States. It really should be a public health crisis,” Seaman says. “There are things we can do to improve survival from cardiac arrest, and it’s not just treating it after it happens. The big message for me is prevention. I really want every one of those patients to survive with good quality of life, able to implement medical treatment and lifestyle strategies to prevent further episodes of cardiovascular disease.” These messages can reach community residents without cardiovascular disease, helping them prevent the disease from ever occurring.

Seaman emphasizes that Howard County’s success is due to the many paramedics and EMT/firefighters who work hard every day to make a real difference in people’s lives. He is particularly focused on illustrating how proper training and concentrated data tracking can result in improved medical delivery and health outcomes for residents of his community.

“I’m a big believer in team play, and this has been a real team effort where the sum is greater than the parts,” Seaman says. “We’ve had so many members of our department willing to pull together toward the same goal of measuring for better performance in improving cardiac arrest survival. I think that improvement energizes our providers to make a difference, and I want to help make them feel good about what they do.”

Perhaps the best example of the real impact of what Seaman and his fellow group of EMS providers have done in Howard County can be seen when those they have helped save come back to say thank you. “Some of the reunions between our survivors and providers have made it all worthwhile,” Seaman says.