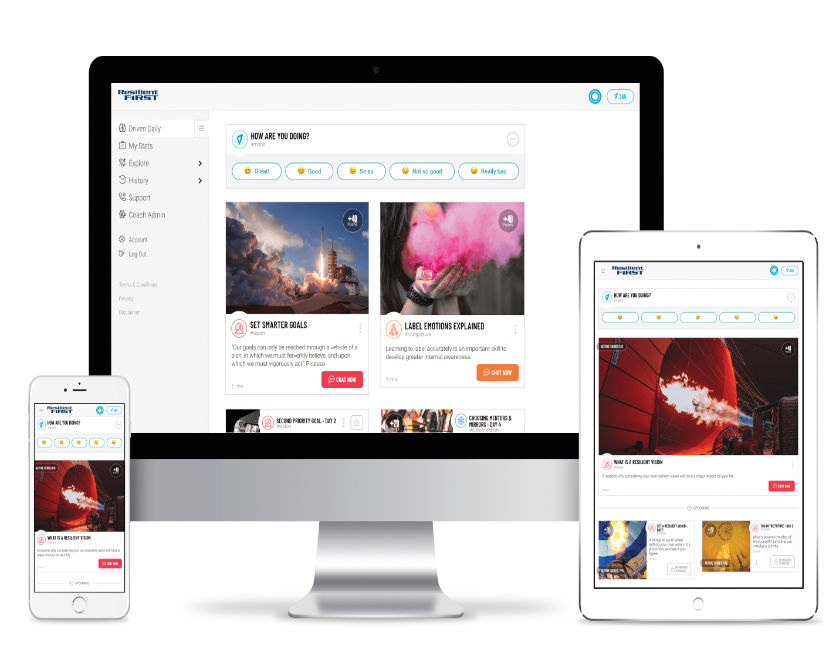 In more than four decades in EMS, Mike Taigman has seen a lot. He ran thousands of calls as a paramedic; as a supervisor and manager, he supported crews running tens of thousands. When not helping others through their own emergencies, he’s had to deal with some of his own–in the last few years, his family has had to evacuate their California home during fires and floods. (Fortunately, his family and his home were fine each time.)

In other words, Taigman knows a bit about the importance of resilience. Resilience is defined as the ability to recover from adversity or trauma. As awareness of increased suicide rates and mental health issues among EMS clinicians has grown, so has interest in the concept of resilience, and how to increase it.

As improvement guide for FirstWatch, Taigman now focuses on helping the company’s customers use technology to improve operational performance and patient care. With the recent launch of ResilientFirst, FirstWatch is hoping technology can play a role in building resilience among EMS clinicians as well.

In this interview, Taigman talks about the science behind resilience, what it means for EMS and what he’s learned about himself during his own efforts to increase his resilience.

JEMS: What does it mean to be resilient?

Taigman: The official definition we’ve been working with is that resilience is the ability to advance despite adversity. When I step back and think about it, the benefits of increasing resilience for frontline folks is two-fold. On the one hand it is protective, kind of inoculating you: you’re less likely to be depressed, to suffer from anxiety, to acquire PTSD, and less likely to be suicidal. The other side is that people who are resilient tend to be more able to adapt to changes in the world, whether it’s having a baby or getting divorced”¦ and they are less likely to be thrown off by little things, like getting cut off in traffic or dropping your phone in the toilet. They tend to be braver and more willing to take reasonable risks, therefore they accomplish more. And they’re much more effective at achieving goals they set for themselves. Whether it’s to go to graduate school, buy the big house on the hill–whatever their goals happen to be. And they’re likely to be happier and healthier.

JEMS: It sounds like this is about more than just reacting to incidents with the potential to be traumatic, like pediatric cardiac arrests or violent injuries?

Taigman: To talk about running one or two bad calls as an isolated part of someone’s life is like talking about your right knee being screwed up and not talking about your mood, your gait, your hip alignment. We’re whole people. There’s resilience, and on the other side is burnout and compassion fatigue. You talk to people about what got them there, in some cases it’s a series of bad calls, so there’s no doubt that that is a contributing factor. But it can also be a partner that drives you crazy, a supervisor who’s a pain in the rear, financial troubles at home, relationship problems–the whole constellation of things that contribute to stress in the world. The nice thing about building resilience is that when you handle bad calls, you’re less likely to be emotionally or psychologically injured. The way I look at resilience, it’s like going to the gym. At the gym you increase your strength and your flexibility so you’re more prepared to handle physically demanding situations; strengthening your resilience allows you to deal with all kinds of stressful situations.  It’s like taking your brain to the gym.

JEMS: Does strengthening resilience only help EMS clinicians after bad calls, or does it also help them in the moment, so they’re better providers on the scene and with the patient?

Taigman: It’s both. And it’s not just the “really bad” calls. It can also help simply when dealing with difficult people. Better resilience can help clinicians with emotional regulation and emotional response. When you end up with a patient who yells at you about your gender, your ancestry, or what you said to them–maybe they’re hypoxic or hypoglycemic, and they say and do things that are likely to be triggering; if you’re resilient you’re less likely to be triggered. It’s smoother and less likely to end up in a bad outcome for the patient or bad problems for you.  Part of being a good EMS clinician is sorting through difficult circumstances on behalf of your patient. People who are resilient are problem solvers and more creative.

JEMS: You’re someone who believes strongly in evidence-based EMS and quality improvement. What’s the science behind resilience?

Taigman: There’s actually a lot. I have a folder on my computer with probably a couple of hundred articles and studies around the various aspects of this topic. Really clear evidence that emergency telecommunicators, EMS providers, police, firefighters, nurses, physicians, and now even veterinarians have much higher suicide and PTSD rates than the general population. We have a greater need than the base population for resilience. When you look into the resilience literature, there’s a lot that suggests we actually can improve our resilience–and have better outcomes. In a study of a prison with several people who’d tried to kill themselves, they had almost all suffered childhood abuse. Within the same prison population, other people who’d all experienced severe childhood trauma and had never attempted suicide were found to have much higher resilience than those who attempted suicide. Other studies show that resilience is associated with better mental health.

JEMS: ResilientFirst is a program that requires just a few minutes a day. Can we really improve resilience that way?

Taigman: It really is an interesting way to do it, and a lot different from what we’re used to. I come from a background where you do ACLS for eight hours for two days. This “micro-task” approach has evidence dating back more than a century, when a psychologist first described the “spacing effect,” which says that you retain more and learn better if the information is not presented all at once, but rather spread out over time. One of the things I’m learning about right now is the value of tenacity in improving resilience. After spending a few minutes each day on it, I’ve noticed it just start to show up in my daily thinking and behavior. It’s a lot different than sitting in a class all day and struggling to remember anything a week later.

JEMS: So you’re using this yourself?

Taigman: Not just me, but my family. One aspect of improving resilience is recognizing and labeling your emotions. The other night my son was having dinner in front of the TV–which I know is bad parenting–and he spilled his dinner, sending a Jackson Pollock spray of marinara sauce in the air. I saw the look on my wife’s face as she took a breath and muttered to herself “What am I feeling right now? Surprised.” She then said to my son, whose name is Ax, “I’m feeling surprised. Ax, are you surprised?” And he said, “I’m surprised that surprised is what you’re saying, Mom.” Three or four months ago that would’ve been one pissed off mom and a bad little kid, but it didn’t need to be.

Another important aspect for me has been recognizing the relationship between “physical” health, mental health and resilience. Probably the biggest gap for me was my sleep habits, which I kind of wore as a badge of pride. The more I’ve learned is that it’s kind of magical thinking, pretending I could be healthy and resilient on only four or five hours of sleep. I’ve really focused on improving my sleep hygiene. I’m finally using the CPAP device I was prescribed four years ago. The sleep-exercise-nutrition aspect of resilience is vital.

Resiliency During the COVID-19 Pandemic

0
Much about the current situation with COVID-19 is out of our immediate, direct control and has potentially life-altering consequences.