The 2016 International Association of EMS Chiefs (IAEMSC) Leadership Summit convened in Washington, D.C., with the National Healthcare Coalition Preparedness Conference. The conference theme of “Ensuring Readiness, Building Resilience” captures both the preservation of systems and processes that bolster vigilance, as well as exploration of innovations, ideas and methods of growth and advancement. “The co-location of the two conferences in the same venue will promote collaboration and interaction between the two organizations,” said IAEMSC President Paul Brennan.

The IAEMSC Leadership Summit opened with a presentation on “Leadership Challenges in Times of Change” by Richard Serino, Distinguished Visiting Fellow in the Harvard University T. H. Chan School of Public Health and John F. Kennedy School of Government for Public Leadership. Serino is also a Director Emeritus and founding member of the IAEMSC, as well as a former Deputy Administrator of FEMA following his retirement as Chief of Boston EMS.

Chief Serino provided an explanation of “swarm leadership” using examples from the multi-agency response to the Boston Marathon bombing. His first-hand observations and the subsequent incident leadership study by Harvard University identified how multiple agencies became mutually supportive of each other and a common purpose. The leadership during the response changed continuously, based on the specific situation being handled at the time. Serino encouraged EMS chiefs to regularly communicate to their personnel, in their own words, to make sure everyone understands the current situational and organizational status. He used his “daily missives” while Deputy Administrator of FEMA as an example, with the 150 responses he received from throughout the agency expressing appreciation for the communication from senior leadership. Serino also encouraged the IAEMSC EMS Leadership Summit attendees to take advantage of the opportunity to meet and interact with the National Healthcare Coalition Preparedness Conference attendees. 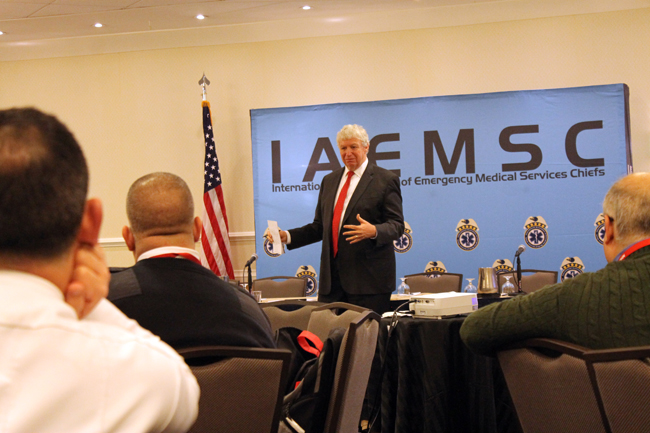 The opening keynote address for the National Healthcare Coalition Preparedness Conference was delivered by former Governor and the first Secretary of the Department of Homeland Security, Tom Ridge. Governor Ridge’s presentation of “Leadership in a Time of Crisis” complemented Chief Serino’s overview of the leadership study from the Boston Marathon bombing. Ridge encouraged leadership to “get out in front” and serve as the focal point during a crisis. He offered his appreciation to the public health and public safety responders that serve our communities every day.

Several members of the IAEMSC had an opportunity to meet with Governor Ridge following his presentation. IAEMSC President Paul Brennan presented an IAEMSC challenge coin to Governor Ridge with the appreciation of the group for his service to the nation both as a veteran and public official.

The mission of the IAEMSC is to support, promote and advance the leadership of EMS response entities and to advocate for the EMS profession. The IAEMSC membership is made up of leaders from both career and volunteer EMS organizations and proudly represents and embraces the diversity of EMS agencies throughout the world. Additional information is available at the IAEMSC website at www.IAEMSC.org. The IAEMSC Summit continues through Wednesday with scheduled events providing formal and informal interaction among the attendees.