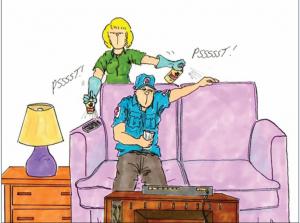 “˜You are always gambling with germs. You just want to keep the odds in your favor,’ –Charles Gerba

W hat’s a lymph node to do? They’re everywhere. One hundred trillion of them, infiltrating our fragile life forms from within–devouring, digesting and reproducing faster than our nation’s national debt. Makes my T-cells quiver just knowing only 10% of my body cells are that of human while 90% of my remaining cells are made up of bacteria (a.k.a., Taco Bell).

Bacteria are biological agents that cause illness or death to their host–similar to visiting relatives during the holidays. Ten thousand species of bacteria reside on or within the human body. Other germ family members include Aunt Virus, Uncle Fungi, and bed-wetting Nephew Protozoa.

Fortunately, most bacteria are harmless and are in fact essential to human life–including the salvation of Earth from invading alien ruffian Martian hordes (i.e., H.G. Wells, “War of the Worlds”). Bacteria aides in food digestion, synthesizes vitamins, acts as a barrier to other harmful bacteria, and, more importantly, gives my cheese its tantalizing taste.

The ick factor comes into play when germs become pathogenic by releasing their nasty toxins. Or as Martin Fischer put it, “Bacteria keeps us from heaven and puts us there.” It’s bad enough germs are the second leading cause of death second only to CAD (Cheese Addiction Disease), but 100,000 of those deaths are a direct result of infections contracted by patients in hospitals–one more reason to avoid being incarcerated in a healthcare environment.

Makes me wonder how I ever survived this long in EMS without becoming one giant, walking, mutated-viral-infested epidemiologic petri dish with athlete’s foot. Especially back in the day when donning latex gloves, protective eye wear, and masks on a call were considered unnecessary, inconvenient and un-chicish. Ah, good times (cough, wheeze, sniff).

Germs penetrate and inundate every aspect of our lives and are a legitimate cause for concern–especially if they work their way past our first innate lines of immunity defense (skin and mucus barriers, cough and sneeze reflexes, stomach acid and Cheese Whiz). But I am beginning to think society may have gone a little overboard with its obsession to sanitize the world ever since we authenticated the link between health and cleanliness. I recently responded on call for a woman who lost her balance and fell down an escalator because she refused to grab onto the germ-laden handrail. She broke her lower leg, but at least managed not to get the flu. (She contracted pneumonia at the hospital instead.)

My children, despite my best efforts to keep them hygienically sound, followed in my footsteps regarding their ability to magnetize themselves toward a microbial-festering world while growing up. Just as their small developing brains craved all the sights, sounds, smells, tastes and tactile stimulation this world had to offer, so apparently did their immune system circuitously. Studies show children who grew up on farms or attended day care at an early age are less prone to allergies and asthma, and eat more–you guessed it–cheese.

Now I’m not suggesting you encourage your children to play treasure hunt in the cat’s litter box, but many recognized scientists (from police lineups) theorize our immune system needs to learn, recognize, adapt and regulate itself to germs at the early stages of development to strengthen itself for a lifelong battle to assassinate infectious sprouting microbes. So sprouts the question, does this need to constantly challenge our phagocytes and lymphocytes continue into adult life?

I personally believe my own EMS provider’s immune system has been highly strengthened by my constant exposure to cooties (Contagiously Obnoxious Oozing Toxic Infected Eeeewy Substances), just as it was when I was an elementary teacher prior to entering EMS. And though I rarely become sick, I believe I need to protect my patients and family from any unintended germs that may have hitchhiked on my person during the course of a shift.
I’ve heard that 80% of all infections are transmitted by direct or indirect contact, so I have taken upon my hygienic-ninja self to incorporate guidelines of my own making to ensure those I come in contact with are less vulnerable to cootie contact. (By the way, if 80% of infections are transmitted by direct or indirect contact, how the %$#@! are the other 20% transmitted?)

The 16 tips I’ve created for fighting germs in the field are in a handy-dandy table at right.

Until next time, as Steven Wright once said, “Support bacteria; they’re the only culture some people have.”