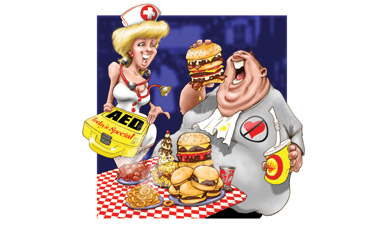 Going It A-Loan
Imagine loaning advanced lifesaving technology to locations where people congregate in large numbers and providing training for them to be able to use it. That’s exactly what Tri-State Ambulance, a La Crosse, Wis., EMS agency has done with its AED loaner program.”ž

This program is the first of its kind in the U.S. It was hatched after the agency met with the Sudden Cardiac Arrest Awareness Association, and Tri-State Director of Operations Tom Tornstrom noted the large number of summer gatherings in the La Crosse area. Tri-State now allows people to “check out” AEDs for free for personal, business and community events. But first, they must view a short tutorial video with a Tri-State paramedic present to answer questions.”ž

“We have one AED and have had quite a few calls already,” Tornstrom said. “My guess is by next spring, we’ll have two AEDs.”

So far, the AED has been loaned out for one event an Oct. 10 charity chili cook-off, which had about 1,000 people in attendance. Thankfully, it wasn’t used, said Tornstrom.

But with the prevalence of cardiac arrest and the need for AEDs within five minutes of arrest, some day it likely will be used by a Tri-State-trained layperson.

For this reason, Tornstrom hopes the idea catches on in other communities. So do we.

Failed Charge
A 49-year-old Chicago man collapsed while snow blowing in January 2005, according to a Chicago Sun-Times article. His paramedic son administered CPR while waiting for response to his 9-1-1 call. When a Chicago Fire Department (CFD) engine arrived, the crew diagnosed ventricular tachycardia and broke out their defibrillator, but the device’s batteries wouldn’t hold a charge. Spare batteries were installed. They, too, failed to hold the charge. No defibrillation.

The ambulance that arrived six minutes later had a working defibrillator, but the man was already dead.

The Chicago City Council recently settled with the man’s family for $3.2 million. The family’s attorney asserted there was no record of the department buying any batteries since 2000. However, the department contends the manufacturer automatically changed out the batteries every two years.

CFD spokesman Larry Langford declined to discuss the incident because of current litigation, but says the department has replaced all its defibrillators including back-up and spare units with Medtronic LIFEPAK 12s. He said the batteries for the defibrillators they formerly used would display a green light, indicating they were ready to use, while the batteries were on the charger. And although Langford wouldn’t say whether the switch was in response to this incident, he did say the LIFEPAK 12s would eliminate the problem of a battery displaying a green light and later failing. What a shame CFD didn’t address the problem before January 2005.

Mobilizing EMS in Pittsburgh
The G-20 event, which was held in Pittsburgh over two days, included only 5,000 attendees. But because they were world leaders, the U.S. Secret Service labeled the G-20 a “National Special Security Event.” Planning for the high-level international summit started three months in advance, requiring federal, state, regional and local agencies to work together to plan for everything from legal and cultural concerns to a potential mass-casualty incident (MCI) involving terrorism.

Pittsburgh and area public safety officials collaborated with a committee of command-level representatives from the U.S. Secret Service, FBI and FEMA. Of the 21 subcommittees charged with specific tasks and areas of responsibility, EMS was assigned to plan for medical support for public safety personnel, protectees, event participants and protesters of the high-level international event. In the end, EMS treated 22 patients with non-life-threatening injuries, 11 of whom needed to be transported. But because officials had the foresight to create a flexible yet detailed plan that included extended care for a major MCI, the more than 400 EMS providers deployed were prepared for much more.JEMS

Visit jems.com/exclusives for the full story and lessons learned.

0
A crew with Siksika Emergency Medical Services (an aboriginal ALS ambulance service in southern Alberta, Canada) treats a male patient found unconscious due to a suspected poly-pharmacy overdose. Contributing factors, such as patient presentation and the remote setting of the incident (approximately 75 miles from the nearest trauma center), played a part when the team selected rapid sequence intubation (RSI), which enabled them to insert an endotracheal tube to better protect his airway.