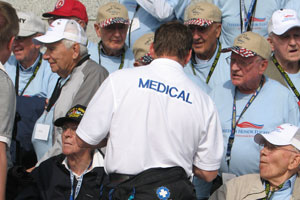 One thousand deaths per day: Based on 2008 statistics, this is the rate at which our World War II veterans are dying.1 Unfortunately, the majority of the 16 million men and women who served, and the 400,000 who died, didn’t receive a thank-you or acknowledgement for their service.2 Instead, the survivors modestly returned home and went about their business, often losing touch with dear friends they shared so much with during the war.

Memorial History
It wasn’t until 2001 that construction on a national World War II Memorial began in Washington, D.C. Three years later, the memorial was complete. It was at that time Earl Morse, a physician assistant and retired Air Force captain from Springfield, Ohio, began discussing the World War II Memorial with his veteran patients. He soon realized it would be physically and financially impossible for most of his patients to make the trip to D.C. on their own. So, in 2004, Morse, who was also a private pilot, asked one of his elderly patients if he could fly him to Washington, D.C. to see the memorial free of charge. The patient broke down and cried at the offer.1 Shortly thereafter, more flights followed, and the “freedom honor flight” network began.

Today there are 71 honor-flight hubs in 31 states. By the end of 2009, nearly 36,000 veterans from three wars had been flown to their respective memorials, and the number of honor flights continues to rise.

The La Crosse, Wis., honor flight hub planned their first trip in early 2008, and with it came a large demand from veterans in the area wanting to participate. Since then, the La Crosse freedom honor flight has made five trips, with veterans to Washington, D.C., and a sixth is in the works. Tri-State Ambulance, a nonprofit provider of emergency and non-emergency ambulance services in western Wisconsin and southeastern Minnesota, is proud to have taken part in every freedom honor flight from the La Crosse hub.

Medical Support
Although each veteran must be medically screened prior to acceptance on a flight, they are still a high-risk, elderly population. It quickly became clear that it would be important to have medical assistance available throughout the trips.

Fortunately, this area of the Midwest offers an abundance of energetic and willing volunteers who are up to almost any challenge. The freedom honor flight organizers approached Tri-State Ambulance and requested assistance in planning for the flight’s medical teams. Each of the two local medical centers, Gundersen Lutheran Health System and Franciscan Skemp Healthcare, also provided input on the medical team that should accompany the veterans on their trips. Although it was obvious from the start that EMS providers needed to be involved, it was unclear how many would be needed. As discussions about bus rides between Dulles International Airport and the various war memorials unfolded, the group decided it was important to have paramedics available to staff each of the three or four buses.

In addition to the three or four paramedics on each flight, one physician from each of the two hospitals was chosen to work alongside them. Because there were more volunteers than were needed on the first flight, Tri-State Ambulance chose the paramedics to go on the trip based upon their seniority level within the organization. It is important to note that while the paramedics volunteered to go on the “Freedom Honor Flight,” Tri-State chose to compensate the paramedics with regular wages while they were away due to liability concerns.The four paramedics on the first flight in 2008 had combined company seniority of more than 90 years. Rick Barton, one of the first flight medics jokes, “We figured Tri-State wanted to send paramedics who were close in age to the veterans we were taking care of.”

Once the paramedics were selected, they became heavily involved in planning the flight. Kevin Kuchar, one of the first volunteers, says, “The planning for this event really wasn’t too difficult. As paramedics, we have the greatest amount of experience dealing with the elderly population, and most of these veterans fit well into that category.” However, the group did encounter some challenges. One of the initial difficulties that Kevin mentions was the inability to carry O2 on the commercial airliner. Fortunately, Tri-State Ambulance was able to work with the airline, and Oxygen was allowed on the flight. In addition, the paramedics typically pack AEDs, a Philips MrX 12-lead monitor, IVs, advanced care life support equipment and other medications and the full gamut of first aid supplies.

Becky Schmidt, a medic on the second flight, fondly recalls, “I think we should have brought along chemical sedation” because emotions can run very high for the veterans. “Many veterans recount experiences that they’ve buried for many years. Sometimes they tell stories of humor, of how they clowned around doing this or that with their best friends in the world at the time. Then, just as quickly, they get a distant look on their faces and then tell of how that same friend died,” says Kuchar.

Besides being available for all veterans and guardians on the trip, the paramedics are typically assigned one or two higher-risk veterans. Lucy Cordes, a medic on the second flight, was assigned to Fred Steeves, a WWII Army infantry veteran. Steeves says, “Lucy was a terrific guardian and is a fabulous person. We still keep in touch even after the flight two years ago.” Thankfully, the medics have encountered only minor medical problems on the first five flights, all of which were handled by the medical team.

The Trip of a Lifetime
Although the freedom honor flights have a big impact on the veterans, they leave a mark on the medical team, too. Cordes remembers, “We bonded with the veterans all day long, traveling through the World War II Memorial, the Korean War Memorial, the Vietnam Memorial and the Iwo Jima Memorial.”

Upon the veteran’s arrival at the WWII Memorial, they’re often met and thanked by a well-known public official. The first freedom honor flight group, for example, had a meet-and-greet with former senator Bob Dole.

The honor flights are completed in a single day, a big challenge for not only the veterans, but also the medical team as well. The flights typically take off at 5 a.m. in front of a large group of well wishers and arrive in Washington, D.C. around 9 a.m. They’re welcomed by the Dulles International fire brigade, who spray water on the plane–an old Navy tradition welcoming ships back from war. The flights return to La Crosse around 10 p.m. to a huge welcome by a hanger full of family, friends and community members.

“Deplaning was wonderful for the veterans. They arrived to a crowd of friends and family and the general public waving flags, cheering and a band playing for them,” recalls Cordes. Kuchar adds, “When they return to La Crosse and see the 400-plus strong welcoming crowd, I’ve had many of the veterans tell me this is the first time in 60 years they have been told ‘welcome home’ and ‘thank you for your service.’ “

Steeves concurs saying, “Oh what a sight! Lucy and I were the first ones off the plane. There were thousands of people waving flags and a band playing. They formed two lines, and as Lucy pushed my wheelchair, everyone wanted to pat me on the hand or back to thank me. I was in tears before making it even half way.” This welcoming home is in sharp contrast to Steeves’ 1945 return home, “I took a cab home from Boston Garden, walked in my parents’ home, and said, ‘Mom, I’m home.’ That was it.”

Tri-State Ambulance has been involved in a variety of special events throughout the years, from allowing medics to attend the first ever Blue Planet Run in 2007, a running relay around the world, to staffing bike teams and power trucks for numerous annual festivals and events in their 2,200-square mile service area. Although it’s not exactly clear as to who gets more out of these trips, the veterans or the paramedics, the experience has been one of the most rewarding for those paramedics who’ve been able to participate.

Thinking back on his 34 years of service with Tri-State Ambulance, Barton says, “Serving on the medical team for these veterans was the most rewarding experience of my EMS career, bar none.”

Tom Tornstrom, BBA, NREMT-P, is a 20 year EMS veteran and the Director of Operations for Tri-State Ambulance in La Crosse, Wis.