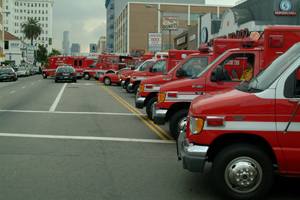 On June 4, 26 ambulance services filed a federal lawsuit in the U.S. District Court for the Central District of California claiming that the California Department of Health Care Services, which administers the state’s Medi-Cal (Medicaid) program, violates their constitutional rights by reimbursing providers at approximately 20% of the actual cost to provide patient transport. Consequently, the ambulance services “subsidize the government’s program with tens of millions of dollars of their private funds each year,” the complaint reads.

The 26 plaintiffs provide emergency and non-emergency medical transportation services to more than 20 million people–about half the state’s population–in 31 counties. Urban, suburban and rural non-profit and private ambulance services are represented in the lawsuit. They’re seeking a permanent injunction that would prohibit the state from reimbursing them at less than their “usual charges” for services provided to Medi-Cal beneficiaries until the state complies with both federal law and their own regulations.

On average, the 2010 cost per transport in the state is $586—$673, according to the California Ambulance Association. Medi-Cal reimburses only $144, regardless of whether the patient requires basic or advanced life support services. In contrast, private payers, Medicare and commercial insurance companies pay, on average, $222, $404 and $1,214, respectively.

The State Plan
In order to participate in the federal Medicaid program, states must develop and adhere to a state plan that delineates the process used to establish fair reimbursement rates.

“The State of California has a state plan in place between the Medi-Cal department and CMS, and that state plan articulates what the state’s requirements are in setting rates,” said Klark Staffan, chief operating officer of Sierra Medical Services Alliance and a plaintiff in the case. “They are required to follow the state plan and to set rates consistent with this plan in return for the matching funds that they receive from the federal government.”

The problem, Staffan said, is that the state has never followed its own plan, which requires the completion of rate studies, consideration of the actual cost of providing service, public hearings regarding proposed rates and an administrative process for solidifying those rates.

“There’s no evidence of any compliance with the requirements of the state plan in regard to ambulance providers,” said Kevin Warren of Hawkins, Parnell, Thackston & Young, the law firm representing the plaintiffs. (The Department of Health Care Services declined to comment on the pending case.) They appear to be set arbitrarily, he said, and with no regard for the actual cost of providing the service, which varies widely based on the level of care provided and between urban, suburban and rural providers.

The complaint asserts that, in violation of federal law, California has set Medi-Cal reimbursement rates that “are not consistent with the quality of care required by California law.” EMS agencies are required to respond to every emergency call, regardless of a patient’s ability to pay. In addition, every county in the state is required to follow California EMS Authority guidelines that designate the required levels of service for EMS services, including the provision of advanced life support services. However, Medi-Cal reimburses only for basic life support transports, “the result of which is an unfunded mandate by the defendants that plaintiffs provide advanced life support services at no cost to defendants,” the complaint reads.

“Our services are emergent, and we have to respond to each and every call. It would be inappropriate for us to say no,” Staffan said. “We would never do such a thing, so we are on the hook legally, ethically, morally and contractually to respond to these calls and to provide the service. We can’t know before we provide services who is going to pay the bill, and by design, we shouldn’t. We should not make patient care decisions based upon who is paying the bill. All we are asking in return is that the state reimburse us our cost and recognize that we’re a unique classification of provider, that almost no other provider falls into, and that we can’t say no.”

Claims for Relief
This case is based on five “claims for relief.” The first claim asserts that California’s Code of Regulations, which sets the Medi-Cal rates, violates the Supremacy Clause of the U.S. Constitution because it’s inconsistent with federal law, which requires that private parties be reimbursed at least at cost for products and services taken by the government for public use. Interestingly, on Aug. 3, the federal court issued a temporary stay of this case at the state’s request based on this first claim, because two separate cases involving reimbursements to pharmacists and independent living centers are awaiting consideration by the U.S. Supreme Court this fall. Warren, however, believes these cases do not parallel the ambulance providers’ complaint, because the other cases are fighting rate cuts passed by the state legislature, whereas the state never established legitimate reimbursement rates for ambulance providers per their own state plan.

Regardless of how the Supreme Court proceeds with regard to the first claim, this case could move forward if necessary on the other four claims for relief, which include:

“¢ taking of private property without just compensation in violation of the Fifth Amendment (i.e., reimbursing at 20% of cost on average and without regard for the actual cost and level of service provided);

“¢ violation of procedural due process per the Fifth Amendment (i.e., neglecting to give the plaintiffs any hearing before depriving them of a significant property interest);

“¢ violation of substantive due process per the Fourteenth Amendment (i.e., the state’s actions are “arbitrary and capricious” and “shock the conscience because defendants refuse to comply with promises they made in exchange for receiving federal money that was intended by the federal government to be paid to plaintiffs for the services they rendered to Medi-Cal beneficiaries).”

“˜Teetering on Financial Disaster’
Staffan said Sierra Medical Services Alliance has worked diligently to solve the reimbursement crisis out of court, but “to date, all administrative and legislative measures have failed in an attempt to gain a rate increase which would be substantial enough to make a dent in the problem.

“California has one of the highest costs of doing business in the nation compared to other states,” he said. “At the same time, California has a history of being one of the lowest reimbursement states for Medicaid recipients in the U.S.”

Among the agencies that filed the federal lawsuit, Medi-Cal patients account for anywhere from 20—35% of patients, he said. “If Obama’s health-care reform bill is implemented in its entirety, we estimate that the number of individuals that will be on Medicaid programs across the nation will skyrocket. So this problem, which is now significant, will become dire.”

The California Ambulance Association estimates Medi-Cal roles will grow by 27% in the state over the next nine years, or by approximately 2 million beneficiaries.

“There are some members of our group that are teetering on financial disaster, because they’re not able to recuperate the cost of providing the service,” Warren said. “When you compound that with more and more requirements to serve more people at a 20% reimbursement rate, it will most likely cause quite a few of these ambulance providers to go out of business.” Ironically, the goal of expanded health care under reform would be jeopardized if private services close their doors and patients lose access to timely EMS care due to below-cost reimbursements.

In Sum
If successful, this case could benefit all ambulances services in the state–and perhaps beyond–by setting important precedent. The ambulance services that filed the lawsuit are “putting their necks out” in challenging the government, Warren said. One of the plaintiffs tried to challenge the government on another rate issue several years ago, and they were retaliated against, he said. “A lot of these companies are afraid that the government is going to come after them one way or another, whether that’s denying more claims or increasing audits or through other administrative actions.”

Staffan said that’s a risk he and the other plaintiffs are willing to take, because they’re fighting for survival and it’s simply the right thing to do. “If we don’t fight this fight, it’s apparent that no one else is going to,” he said. “It’s a shame that we have to do it–it’s a shame that either the federal government, CMS, the state legislature or the folks who run the Medi-Cal program aren’t correcting this wrong on their own. We have no choice.”

This appears to be the only case, at least in California, that raises several non-Supremacy Clause issues as the basis for relief, Warren said. If successful, it could have far-reaching implications for how health-care reform is funded.

“There’s only so much money in the state treasury, and if you can’t afford to participate in a program like Medi-Cal or Medicaid, then you shouldn’t participate. It’s not fair to say, “˜We’re going to participate,’ and then force all these private parties to absorb the cost. It’s like direct taxation without representation.”