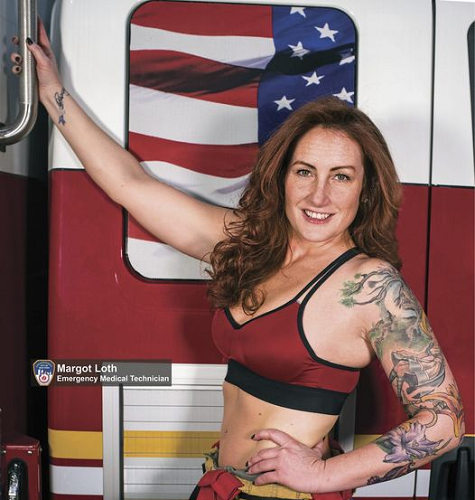 STATEN ISLAND, N,Y. — A female city Fire Department captain has been named in a lawsuit against New York City — specifically the FDNY — that was filed by a female EMT who alleges she underwent gender discrimination for being part of the yearly FDNY sexy Calendar of Heroes.

The lawsuit, filed in Manhattan Federal Court on Saturday, by Margot Loth, 36, an FDNY EMT since 2011 alleges Donna Tiberi, her former superior, who is now an FDNY Deputy Chief “referred to Ms. Loth as a “˜calendar girl’ in a degrading manner on the basis of her gender” after she appeared in the 2019 calendar as Miss March, according to court documents.

“We filed this lawsuit because Margot and the women of the FDNY deserve better,” said Loth’s lawyer, Vincent White of White, Hilftery & Albanese, based in Manhattan. “They risk their lives to save others, yet these people sought to reduce them down to nothing more than their appearance and their gender. They would not do that to a man, and we need to ensure they won’t dare to do it to a woman.”

White and a N.Y. Post report said Tiberi is a Staten Island resident.

The lawsuit alleges Tiberi filed various false disciplinary infractions against Loth. In addition, the lawsuit also claims Tiberi refused to approve her overtime and stood in the way of Loth obtaining a promotion.

Among other allegations, the lawsuit says when Loth and her male ambulance partner were reprimanded for returning to the station before their shift ended, Tiberi gave her parter warning, but slapped Loth with a command discipline that led to an internal investigation.

According to FDNY sources, its Equal Employment Opportunity department investigated Loth’s claims and found they were unsubstantiated. The FDNY wouldn’t comment on the lawsuit. And Tiberi couldn’t be reached by the Advance for comment.

Loth spoke about posing for the calendar on the FDNY Foundation’s Facebook page.

“I know some very strong and beautiful women from the previous calendars and they were such an inspiration to me. We are a force to be reckoned with in this Department. We are comfortable with our skills, strong, confident, and we look out for each other. We are opening doors and breaking glass ceilings, and I am proud to be a part of it,” said Loth.

“I have always wanted to continue to move up through the ranks of this Department, so I am very excited for this next step. Every day on this job is a different opportunity to grow and learn new ways to help people. Being promoted during this time in history is very different. We’re all unaccustomed to this way of living and it’s been a challenge to figure out this new process…,” said Deputy Chief Donna Lynn Tiberi, who was promoted at FDNY Officers Promotion Ceremony in May.

“All proceeds from the sale of the calendar benefit the FDNY Foundation, which funds fire safety education and CPR training for New Yorkers — especially children and seniors — as well as training and fitness equipment for FDNY members. Purchase the calendar online at www.FDNYshop.com,” says the Foundation in a Facebook post.