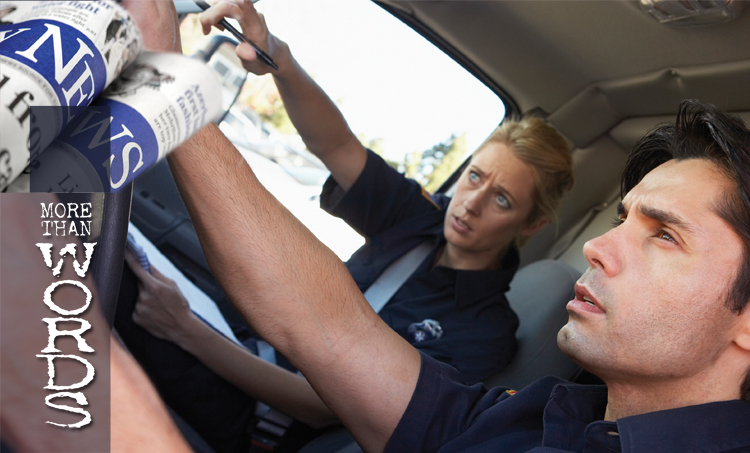 It’s time EMS administrators, medical directors and EMS system leaders take an active role in educating the media about proper terminology when reporting about newsworthy events that involve EMS providers. Although this may seem like a futile effort, two recent success stories highlighted in this article serve to remind us that we can influence change.

After an unfortunate ambulance crash claimed the life of a patient, the local newspapers, radio stations and all of the television news stations (including their websites) reported on the incident and used headlines referring to the paramedic who was operating the ambulance at the time of the crash as an “ambulance driver

A hospital starts an advertising campaign to highlight the skills of their cardiac service. An advertising firm is consulted, and a campaign is developed that involves a reference to EMS.

The campaign, which is quite expensive for the hospital, consists of radio, print and television advertisements. When the campaign is launched, the local EMS community is dismayed when they hear the actors’ words in one of the advertisements: “When I had chest pain, I called 9-1-1, and the ambulance driver told me I should go to the closest ER.  I told them “˜no, take me to University Hospital. That’s where I want to be if I’m having a heart attack.'”

The ad campaign also featured a patient refusing to follow a paramedic’s advice about the most appropriate hospital for his condition.  It was further undermining of the EMS systems triage and transportation processes and credibility of EMS within the community.

These cases represent common scenarios for EMS providers who often go home after a shift that involved a newsworthy call–one for which EMS was heavily involved, if not the primary service. They read the paper or turn on the local television news, and all too often, they’re greeted with one of two scenarios: either the reporters mention only police and firefighters, or if individual EMS providers are mentioned, they’re called ambulance drivers.

It’s time we took some action to help prevent this problem from continuing. As a community, EMS can impact change by educating the media outlets. In case 1, a local EMS medical director sent a letter to each media outlet that had referred to the paramedic involved in the fatal ambulance crash as an ambulance driver. Here’s what was sent:

I appreciated your report about the tragedy involving yesterday’s fatal ambulance crash, and I wanted to add a perspective that may not have been considered. I am a local EMS medical director and emergency physician.

The terminology that the media is using, ambulance driver, is an inappropriate title that misrepresents the position and training of the paramedic who was driving the ambulance at the time of the crash. In the EMS industry, we never refer to EMTs and paramedics as “ambulance drivers.” Consider that if it had been a police car in the crash, the headline would not have said “police car driver,” and if it had been a firefighter, it would not have said “fire truck driver.”

Unfortunately, this type of terminology strikes a sensitive point with our EMS providers, as it’s not uncommon to see media reports about our heroes and first responders that refer to “police and firefighters” but fail to mention EMS, the third major group of first responders in the public safety community.

Individuals who have chosen a career in providing prehospital emergency care to people in need deserve better public recognition than to be called “ambulance drivers,” a term they find highly offensive. EMS is a skilled profession, but unfortunately in many areas, it’s also an underpaid profession. The individuals who dedicate their careers to EMS take pride in their advanced training and experience as EMTs and paramedics, and they’re motivated by the deep sense of job satisfaction that comes from knowing that their knowledge and skills have a true influence on their patients’ lives.

EMS providers have the skills to deliver many of the medications and perform many of the same emergency procedures that are performed by physicians and nurses in the emergency department.

The paramedic who was driving the ambulance when the crash occurred is a highly trained and well-respected paramedic in the local EMS community and is suffering enough as a result of this crash. She and her colleagues deserve better from the media. I hope you’ll consider this in future reporting.

A variation of this letter was sent to the reporters or editors responsible for the story in each of the local news outlets (four were television news stations and one was a newspaper). Within 12 hours, responses were received from three of the four TV news stations. And although one response was negative and the newspaper never responded, the rest were positive. The negative TV news station response stated that they were already aware of the issue but that they used the term because police used it in their report.

The other TV news station responses were surprisingly affirmative. The following response, received from the news manager for two national network news affiliates, was the most encouraging: “Thanks for the e-mail. All our past scripts have been corrected and those in the future will be correct. I had no idea and appreciate the correction. We always want to be accurate, and your e-mail helps. I hope you keep watching our news.”

In the second case, there was a large response from local EMS providers, agencies and leaders. Although the hospital initially resisted any change (citing the cost of the advertising campaign), they eventually pulled the advertisements and changed the wording.  In addition to realizing they had used the wrong term, the hospital also learned that selection of the most appropriate destination and distribution of patients from a major incident scene is an important part of an EMS provider’s role.

Both cases demonstrate that we can make a difference in how the media portrays EMS. A grassroots approach can make this effort effective. It’s time for us to actively educate the media when their terminology is misleading and creates the wrong impression.

The positive response demonstrated by both these cases should serve as motivation for EMS providers to take the time to educate the media when we’re misrepresented.