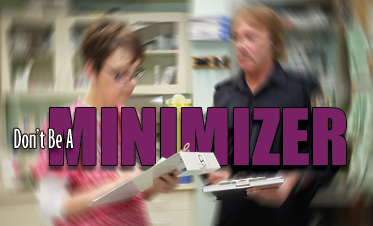 One of the worst things you can do in EMS is become a “minimizer.” A minimizer is a provider who underestimates the signs and symptoms of a patient and hastily concludes they have the most benign condition possible. Conversely, the best thing we can do for our patients is initially assume the worst and work backward from there. Minimizers are typically those with “medium” experience on the street (not newbies, but not old dogs). Many of us go through a stage of being a minimizer but later recover. But chronic minimizers exist. Think about it. Are you one of them?

How to Know It’s You
Almost all problems have a differential diagnosis, which include benign causes and serious causes. Frequently, not all of the serious causes can be ruled out without an involved workup in the emergency department (ED). For example, take the 49-year-old chest pain patient, with only one obvious risk factor–smoking. He has reproducible, sharp, right-sided chest pain. Non-cardiac, right? Wrong. If you were thinking right, then you might be a minimizer. This patient was actually having a myocardial infarction (MI). You should have been thinking MI, dissection, pneumothorax or pulmonary embolism (PE) until proven otherwise.

A study published in JAMA in 2008 summarizes this and several other chest pain fallacies.(1) The study reports a systematic review of the medical literature looking at evidence surrounding certain characteristics of chest pain presentation in acute coronary syndromes. It concluded that the presence of stabbing, positional or reproducible chest pain characteristics are of marginal value in predicting non-cardiac origin. It further noted that using response to nitroglycerine administration as a sign of cardiac disease is “truly mythological.” In fact, nitro has been known to relieve pain from gastroesophageal reflux disease. Have you ever ruled out cardiac causes based on pain not relieved by nitro? Then you just might be a minimizer …
It’s important to have a wide differential diagnosis in your mind when dealing with chest pain, because an MI is not your only concern. There’s a long list of potentially tragic conditions that cause chest pain, including aortic dissection, Boerhaave’s syndrome (ruptured esophagus), pneumothorax, a bleeding ulcer and PE. Many of these conditions can’t be ruled out through a prehospital assessment alone. For example, there’s also plenty of evidence suggesting that the presence of reproducible chest pain doesn’t make a PE any less likely.(2) So, there’s lots of “badness” that could be causing reproducible chest pain. Don’t be a minimizer when you come across it.

Clearly, many factors aren’t as useful as once thought in predicting the seriousness of chest pain, so what should guide your clinical judgment about chest pain? Radiation of the pain does have a strong association with cardiac origin, which means if it’s there, it’s fairly concerning. However, as in many cases, the converse isn’t true; don’t be fooled into thinking the absence of radiating pain reduces the odds of a cardiac-related condition.

When performing a chest pain assessment, providers should consider the cardiac risk factors. Remember, there are five major risk factors for heart disease: high cholesterol, smoking, diabetes, hypertension and family history. Even for those without any risk factors, a 12-lead ECG should be performed on every chest pain patient (or other suspected cardiac patient) over the age of 40 (and, for some situations, in patients under 40).
It’s also important to remember the types of patients who tend to have atypical presentations of MI, meaning, not the classic “chest pressure and shortness of breath” presentation we always think of. Two major groups known to have atypical MI signs more often are women and diabetics. Women might be more prone to subtle neck pain, arm pain or painless shortness of breath. Diabetics may have had years of nerve damage from high blood glucose levels, so they might be less likely to have chest pain because their sensory nerves to the myocardium aren’t fully functional. In order to avoid being a minimizer, you should be particularly suspicious of women and diabetic patients with atypical symptoms–always perform a 12-lead ECG.

There’s no single element of the chest pain history or physical exam that, if taken in isolation, can indicate that chest pain is less likely to be something serious. Don’t let yourself go down that path of minimizing the complaint. On the other hand, it’s appropriate to let certain factors, such as radiation of pain, sweating and risk factor profile, increase your suspicion of a serious concern.

Not Just an Attack
Let’s consider a different patient presentation. An EMS unit is dispatched to an “anxiety attack” at a university residence hall. They find a 21-year-old college senior complaining of severe shortness of breath. It’s clear she’s hyperventilating. She tells them she feels very anxious but isn’t sure why. They ask if anything stressful is going on in her life, and they learn she’s having relationship problems and has been studying hard for finals. When taking her past medical history, they also learn she has a history of anxiety.

The paramedic on scene has it all figured out–a 21 year old, during finals week, with personal problems and a history of anxiety. He writes “anxiety attack” as the working diagnosis on his report and signs the patient off to the BLS unit on scene. En route to the hospital, the patient becomes confused and hypotensive, and when the EMTs check the oxygen saturation, it’s found to be 86%. In the ED, the patient is treated urgently for a presumed PE. In follow-up, the EMS providers learn the patient was a smoker and on birth control. Both smoking and birth control pills increase one’s risk for developing a PE, but it’s still considered low for patients under 30.

There are several lessons for the minimizer in this example. First, a history of anxiety does not decrease the possibility that a different underlying pathology is causing the patient’s symptoms, nor does being anxious. After all, wouldn’t it make you anxious to have a life-threatening PE? Having any acute problem like this causes an adrenalin release, which causes a feeling of anxiety, sometimes severe, and can cause associated signs, such as an increased heart rate.

The Danger Zone
Why did the medic minimize this case in the first place? It’s possible the paramedic developed tunnel vision as soon as his unit received the dispatch information. Any time dispatch mentions “anxiety” or “history of psych,” it brings us into a cognitive danger zone where we fail to consider the fact that the patient may be suffering from something more serious. When you hear these patient details, it’s best to raise your suspicion, not lower it. There’s just as high a rate of severe medical conditions affecting patients with a psychiatric history as those without. Chalking conditions up to “psych” is a habit of a minimizer.

Having a psychiatric history doesn’t protect against coronary artery disease, PE or pneumothorax. Anxiety attack should be a diagnosis of exclusion, which means it can’t be made in the field in most circumstances. A large pulmonary embolus causes chest pain, shortness of breath, anxiety and hyperventilation-like symptoms (high respiratory rate, low EtCO2), so a careful evaluation should be performed by the EMS provider. Documentation should include evidence that the crew considered a broad differential diagnosis before arriving at their working diagnosis.

Problems in the ED
One final, important point is that minimizing symptoms in EMS can impact the care of the patient once in the ED. Emergency nurses and physicians respect the workup and diagnostic opinion of their EMS colleagues and can sometimes be falsely reassured by the field assessment. For example, a patient with atypical chest pain who hasn’t had an adequate assessment in the field (e.g., no 12-lead ECG) could be placed in the waiting room or non-acute area of an ED if the crew passed their judgments on to the triage nurse.

Consider two ways the same patient could be presented at triage: “I have a 49-year-old woman with a history of anxiety who had an upsetting event today and now has some chest pain, which is reproducible.” Or, “I have a 49-year-old woman with two risk factors for heart disease who had the onset of chest pain after a stressful event today. Her pain is atypical, but we got a 12-lead, and there are some signs of ischemia.” Which presentation do you think would send the patient to a higher acuity area in the ED?

Jumping to Conclusions
It’s our job as EMS personnel to assume the worst about a patient’s condition. The need to be apprehensive of symptoms, such as chest pain and shortness of breath, can be applied to almost any chief complaint we encounter in EMS. Start a workup the ED can continue, and don’t put yourself in a position of liability by being a minimizer. Be suspicious!