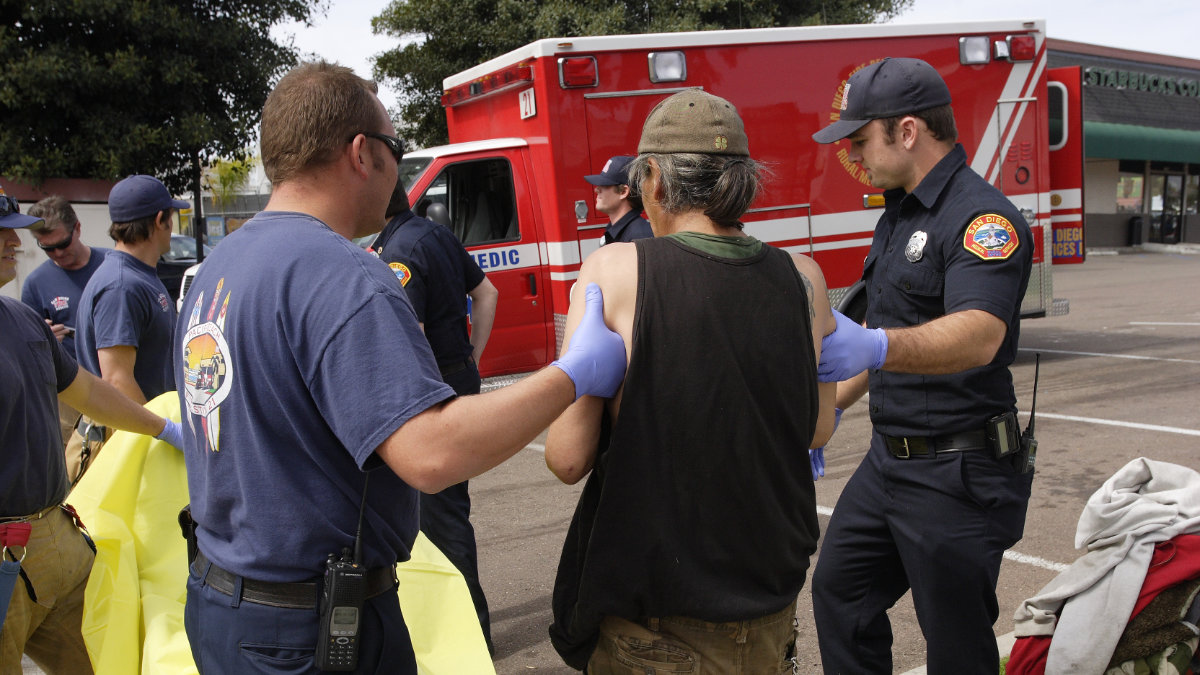 Dallas Fire-Rescue Medical Director Marshal Isaacs, MD, calls them “prime numbers.” He’s referring not only to drug-seekers–although many of them belong to the population of patients who “fall off the grid” in between encounters with the healthcare system, and therefore pose a major challenge to being tracked over time. These patients can be transients or migrant workers; they can be living in short-stay accommodations like motels, and therefore moving frequently around a region; they can be suffering from mental illness or addiction and moving among rehabilitation centers; or they might be drug seekers trying to stay ahead of the radar, so to speak, so that they can jam their hand into a motor over here, collect narcotics to ease their pain, and not be noticed over there.

Despite the overdue discussion about post-traumatic stress in EMS and Fire (which is to say, prehospital caregivers are an army of clinicians on the lookout for mental and social challenges, increasingly even among their own ranks), it can be easy to let cynicism sink in. In reality, understanding why a particular patient moves around the healthcare system demands a case-by-case view. The end result, however, is too often the same in cities and towns large and small: the patient is, in fact, lost from the view…and that’s when problems happen.

In an article published in September in EMS World, co-author Jonathon Feit explained how technology can help, and as technologists we wish it could be a panacea, but it isn’t one. Technology is neither the source of all evil, nor its cure; it is a chronically underutilized tool. There are still major operational gaps in prehospital care, especially when it comes to drugs. As a society, it can be tempting to point to over-prescription as the culprit, but if we collectively let the challenges persist without stanching them aggressively, do we not all bear some blame for letting the pain continue? Einstein defined “insanity” as doing the same thing over and over and expecting a different result–when it comes to addiction, we call it a crying and dying shame. Shame on us if we don’t step up, because we see the hurt firsthand, and everyone knows that EMS personnel get invited in the door of those afflicted far more than, say, the police.

With that in mind, we took a step back to consider some specific pain points with respect to frequent users of prehospital care–many of whom (but not all) are drug-seekers–to shed light on some challenges that lend themselves to a technological solution once we address the underlying enablers of the problem to begin with, including gaps in regulation, training, funding, or even empathy. Once we solve those problems, then a technological solution can fast-follow and we can cross a few action items off the still-extensive list.

A key innovation would be enabling hospital-side teams to access prehospital tracking information about drug-addicted patients from across state lines. Cleveland-based physician B. Bryan Graham, MD (son of the late EMS Chief R. Bruce Graham, after whom the International Association of EMS Chiefs recently named a scholarship), emphasized that he and his fellow physicians can access data about narcotics and prescribed medications that have been obtained from around Ohio–even patients who have been seen at other facilities and show up one day later seeking treatment–thanks to systems like the Ohio Automated Rx Reporting System (OARRS).

But just a handful of bridges connect Cincinnati in the southern part of the state from towns in northern Kentucky, and in the eastern part of the state, from Wheeling, West Virginia. In both locations, meds can be obtained without the knowledge of whatever Ohio-based physician will see the patient next. The barrier is therefore not technology, because health information exchanges have no inherent borders and can span the entire country–two well-known examples are CommonWell and the Sequoia Project Carequality, not to mention the Department of Defense and VA electronic health record systems. Is the barrier therefore legal, regulatory “¦ or political–a matter of will? If so, how many lives could be saved–not just improved–if the Powers That Be felt the urgency to change the rules and make information shareable over state lines?

Tangye Beckham, a rural fire service community paramedicine coordinator at the Rio Rico Medical and Fire District in Southern Arizona, has found that drug-seeking behavior coincides with mental illness and–perhaps most poignantly–loneliness as drivers of addiction and repeat use of EMS. “Frequent fliers,” “friendly faces” or “repeat customers” are patients who are largely known to their local responder communities with tragic needs that are profoundly understandable; indeed, in many ways they are the opposite of complex: simple, medical and eminently human.

Tangye told me about people in her community who are losing their memories and fret about doing so, that their future seems darker than today did yesterday. Other patients have learned that their pensions are high enough to disqualify them from public assistance, but not high enough to offset escalating health expenses. Patients therefore self-medicate to relieve symptoms that could be treated more efficiently with better access to care–but also, perhaps, through the “simple” restoration of dignity. It’s a Devil’s Deal that’s never worth the cost because life’s spiral winds in the wrong direction–toward worse, not better–and desperation isn’t conducive to wise healthcare choices.

In an interview with Forbes magazine, Alexandra Drane, a Boston-based entrepreneur whose recent focus has been on the catchall category “unmentionables”–those patients and ailments which political correctness or shame keeps from public discourse, even though that’s exactly where they should be–said:

The vast majority of the people we interact with on a daily basis are tremendously good souls who really want to do well–it’s just that the concept of “doing well” is in the context of their environment–which might be governed by a demonic boss, a loveless marriage, or a demanding family with an aging parent and perhaps growing kids (the isolating reality of the “˜sandwich generation’). How they wish they had the luxury of taking good care of themselves, getting eight hours of sleep, taking all the preventive cautions they should “¦ As a nation, we’ve hit a plateau in terms of driving healthier behaviors–we’ve got a country that’s overweight and getting heavier, overrun with chronic conditions like diabetes, full of stressed out people reaching for burgers as they yearn for the couch–and all the helpful brochures we send out with pictures of healthy happy people aren’t making a lick of difference”¦why?

“Because they don’t resonate. Because they’re not relevant. Because they don’t help us solve the crushing demands and reality of this moment right now. But it doesn’t have to be that way–we’re all human “¦ therein lies the challenge–and the opportunity. We can be beguiled, we can be led, we inherently want to make progress. Our belief is if we just get more honest with ourselves about the reality out there “˜in the wild’–we’d get a lot more creative (and warm, and loving, and joyful, and soulful) with the methods we deployed to meet people–and be genuinely helpful–there.”

Given co-author Art Groux‘s experience directing the Suffield Volunteer Ambulance Association near Hartford, Connecticut, he hungers for the ability to use EMS data across states to identify the “new” trend before we have to overreact to a problem we all should have seen coming years ago. After all, we have the data and we’ve had it for years–EMS was most likely the first to see these patients but in the confines of our own little worlds we did not recognize the problem initially. Let’s face it: two episodes of a new drug overdose in Suffield, four in Salt Lake City, three in Northern Maine may not be an issue on their own, but when we look at the totality, our industry must realize that this is the next issue.

Historically the saying has always been “if you’ve seen one EMS System, you’ve seen one EMS system.” This was the result of communities working to provide the best system to respond to their residents’ needs. We have come to realize that facilitating the best care for our residents starts long before they need us. But without free-flowing data and its resultant knowledge, we find our systems–and that includes our hospital partners–again reacting instead of predicting, preparing, and intervening against the brutal realities that were present and impactful there long before we even noticed them. We were operating in the “one EMS system” model. Modern technology lets us use programs and treatments to keep problems from metastasizing into epidemics. Waiting for CDC data on overdose reporting will mean waiting too long, continuing to work retrospectively rather than looking at this week’s data to decide what to do now and next.

Imagine a new synthetic drug that enters the country via a couple routes, one on the East Coast and one on the West Coast. Unless the number of overdoses reaches a level of national newsworthiness, most systems won’t know about them until the scourge directly impacts them or their neighbors. With a global approach to data we could see otherwise isolated overdoses in real-time and quickly disseminate information to all those involved before the full impact is felt–perhaps even avoiding it altogether. Data can be a powerful prophylactic; today it’s still too often seen as its own pain.

Several years ago, we rightly predicted the ongoing collision between Fire/EMS and hospital-side data mandates, and that the future of healthcare–prehospital, in-hospital and post-hospital–would be data-driven at every level: ALS, BLS, Fire, paratransit, community paramedicine, and critical care, both on the ground and in the air. (Pittsburgh EMS Chief Bob McCaughan has gone further, insisting that it will soon be voice-activated, too.)

Does anyone doubt the primacy of data at this point? Although this story is about the interplay between technology and interoperability, it must end with an emotional point: it’s no accident that the word “patients” rhymes with the word “patience.” EMS is a human business. Empathy is imperative for both the cared-for and the caregiver, so if we’re talking about tracking the illicit use of opiates, opioids and amphetamines, we must remember that there’s a life behind every prescription that gets filled.

How to Simplify Controlled Substances Management and Ensure Compliance