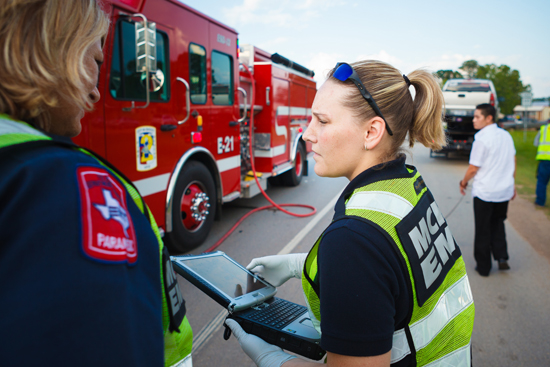 Having focused on quality improvement (QI) in EMS since the days of paper call reports, I can attest to the changes that have occurred with the implementation of electronic patient care reports (ePCRs). When I became the person responsible for QI at our EMS agency, a large urban system, there was very little data collection being done. Charts were completed on paper and reviewed by a supervisor for completeness and protocol compliance. This gave us a picture of what happened on that call, but not in our overall system.

The Road to ePCR
One of my first projects was the creation of a Microsoft Access database that the supervisors reviewing the charts would enter key data points into. From this database we were able to collect data such as IV and intubation success rates, return of spontaneous circulation (ROSC) rates, admission data on calls that were downgraded by ALS, and protocol compliance rates–and even sort this data by individual practitioner. However, it was a limited data set and therefore had limited return. It also required a significant amount of data-entry time by the supervisors.

In 2009, we switched to an ePCR solution. The conversion took a lot of work and was initially met with significant resistance by the staff. We spent months setting up the program to configure it the way we wanted. This included customizing all of the medications, interventions, vitals, facility lists, staff lists and, of course, the state extract (NEMSIS data that had to be sent to the state EMS office). Once our staff got used to the ePCR system, however, they commented on how easy it was to use compared to other ePCR systems. I believe this resulted because of the months of system configuration and changes that were made based on staff feedback during the initial roll-out phase.

Integration of Data Systems
Some of the features our ePCR system has that make it easy for staff to use and increase the reliability of data include:

Auto-population of dispatch data from the CAD to the ePCR, including:

Bluetooth upload of monitor data, including:

Having these data points upload directly into the ePCR has decreased the chart completion time for the staff and also decreased data entry errors. And, the ability to view the full monitor data from a QI perspective is priceless. We’re no longer relying on the crew to attach strips and hoping that crews captured and documented significant cardiac events or interventions.

The auto-population of dispatch data ensures a match between the CAD and the ePCR. This also allows us to run a real-time report showing open charts, which is monitored by the shift supervisor to ensure timely completion of charts and that all charts are completed prior to the end of the shift.

The data from our ePCR system is also monitored by the FirstWatch system. FirstWatch alerts us to any incidents or trends that fall outside preset parameters. This valuable data allows us to monitor compliance with response times, out-of-chute times and specific clinical parameters that we select. The FirstWatch system also notifies us of any incidences that are outside the acceptable parameters we set. In the near future, our ePCR system will compare our clinical and operations data with other customers using the same ePCR and provide benchmark data to us.

Quality Improvement
The most obvious benefit of an ePCR system from a quality standpoint is guaranteed chart completeness. This is accomplished using business rules that prevent a chart from being “completed” without mandatory fields being filled in. These rules are flexible; a canceled call will only require minimal information, while a call that involves treatment and transport by ALS will require many more fields to be completed on the electronic chart.

The system can even require providers to enter times for interventions and vitals during the patient contact time, unless of course they are marked as being performed prior to the arrival of EMS. These rules have not only improved our chart completeness, but improved billing and collection rates because the billing department receives more legible, accurate and complete information.

From a protocol compliance perspective, the ePCR system can be designed to identify calls where the required treatment protocols were not followed, such as ETCO2 use on intubated patients, 12-lead monitoring of all cardiac patients, or other designated parameters. And, on a system-wide level, the ePCR allows you to view performance at a high level and identify trends.

Skill success rates can be viewed on an individual or system-wide level with the touch of a button. Lists can also be generated that include data such as failed intubations and information such as the Mallampati score documented by the paramedic. If the chart for a failed intubation is needed, we simply click on the list and are linked right to the involved chart.

Another time-saving and important component of the ePCR system is its ability to enable the reviewer to return a chart to the practitioner who completed it or to the entire crew with comments or questions. The practitioner(s) can then reply to those comments or correct any errors or omissions on the chart and return it to the reviewer. This capability also allows you to send positive, negative, or corrective feedback to the crews.

Once the charts are reviewed, the reviewer adds quality assurance (QA) markers to the record. These QA markers are not printed on the ePCR, nor are the QA comments. They’re kept separate for QI purposes. Reports are generated based on the QA markers to monitor the quality compliance rates for the individual practitioners as well as the system as a whole.

Return on Investment
I can’t imagine operating an EMS system without an ePCR system. The amount of information available at our fingertips today as compared to when we used paper charts is unbelievable. In addition, the improvements that have resulted in patient care, quality improvement, efficiency of operations and data collection are immeasurable.