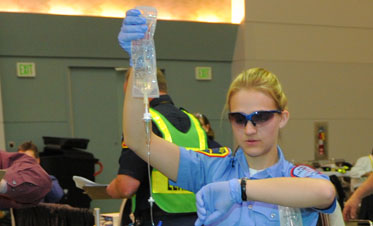 The Science
This Albany, N.Y. study is a convenience sample, which in other words means a research assistant (RA) stationed at the emergency department (ED) approached EMS providers as they presented to the department on a given day over the course of a week. The RA interviewed ALS and BLS prehospital providers, and using an atomic clock timepiece, asked them what time it was. They then compared the provider’s responses to the atomic clock. The RA examined every timepiece EMS had at their disposal. This included their personal watches, cell phones, cardiac monitor/defibrillator and the clock in the ambulance. Finally, the RA compared the time at the nine PSAPs with the atomic clock.

A total of 138 available timing devices were observed, with an overall accuracy of only 36.9%. Cell phones had the best accuracy (67.7%). For the 53 providers surveyed, watches (64.2%) were found to be the most-often used timing device, followed by cell phones (24.5%) and ambulance clocks (11.3%). Only 18 (34.0%) of these preferred devices were accurate when compared with atomic time.

It’s important to realize that “accurate” was defined for the purpose of this study as when the RA noted their timepiece reach the next minute the observed timepiece must have also reached that minute.

They concluded that “There is no precision or consistency in the timing devices used by EMS personnel. However, methods are available, such as those that support the cellular phone industry, that would help with consistent and precise timekeeping. Utilization of modern technologies could increase precision in patient documentation and decrease medical, medico legal, and research issues relating to time documentation.”

The Street
I completely agree with the authors that we have become lax with accounting for time in EMS. I also agree that the time has come, no pun intended, for us to get serious about it. With contracts hinging on whether we arrive within seven minutes and 59 seconds or eight minutes, one would think we would’ve figured this out by now.

However, there are some problems with the way in which the authors reported their results. They contend that their state EMS report records events to the minute. That’s why they considered “accurate” to be only if the time minute and the atomic clock minute were the same. But in reality if your service rounded up or to the nearest minute, then that clock would also be considered accurate. For example, when the atomic clock strikes 11:45:00, the observed watch may say “11:45:45” and is deemed accurate when it is in fact 45 seconds fast. On the other hand, another timepiece may show “11:44:45” and, therefore is deemed inaccurate when it is only 15 seconds slow.

This isn’t rocket surgery. If we look closer at the data in the study, 95% of the cell phones were within 40 seconds of the atomic clock. Using this same means of looking at accuracy, watches were only within three minutes 95% of the time and cardiac monitors over eight minutes.

The bottom line is that we need to get serious about documenting the time, and the authors have demonstrated great discrepancy. But in the absence of the system to synchronize with an atomic clock, your cell phone is an excellent timepiece.