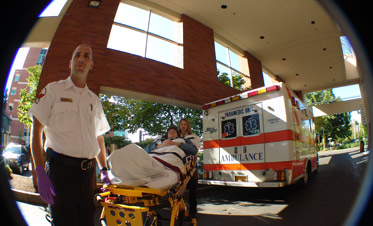 Are there ever times when EMS should deviate from taking patients to the facility of their choice? The answer to this question is definitely “yes.” In some situations, it may actually be negligent to take a patient to the hospital of their choice, particularly when EMS protocols dictate otherwise.

Specialty hospitals now exist in many urban areas. EMS protocols often direct EMS providers to take certain types of patients to the hospitals that can best care for them. Trauma centers, STEMI centers and now stroke centers have met strict certification requirements to be able to care for patients with these particular and time-sensitive conditions. When EMS protocols began dictating transport decisions, there was initially concern that hospital-owned ambulances might violate Emergency Medical Treatment and Active Labor Act (EMTALA) by transporting to a hospital other than their home base because EMTALA considered the patient to have “come to the hospital” upon presenting to a hospital-owned ambulance. This issue has now been resolved, and the Centers for Medicare and Medicaid Services has acknowledged that EMS protocols take precedence over the former requirement that hospital-based ambulances transport only to the hospital that owns them.

But what about situations in which a patient or their family insists on transport to a hospital other than the one to which EMS protocol dictates transport? Usually this insistence is the result of some emotional attachment to a particular hospital facility (e.g., “I was born in that hospital”). This presents a difficult situation for EMS personnel. While not wanting to engage the patient, who’s most likely very ill or injured, or their family in a debate over appropriate hospital destinations, it’s nonetheless critical to try to make the patient understand the EMS service’s legal obligation to transport to the appropriate facility. A life hanging in the balance may ultimately depend upon transport to a hospital that has what it takes to properly care for that patient.

In Melissa Entrican v. Doug Ming, Jeremy Campbell and Rankin Medical Center Ambulance Services, the mother of a patient treated by EMS after a motor vehicle accident sued, alleging that the EMTs and their employer knew or should have known that the hospital to which they transported her wasn’t capable of managing her multi-system trauma condition.(1) Alisha Peavy had been transported to River Oaks Hospital, and the witnesses who testified on her behalf said that the hospital didn’t have trauma care capability. These witnesses further testified that this was a well-known fact in the Jackson, Miss., area.

The plaintiff’s expert, Steven Eskridge, a paramedic and witness qualified in the field of EMS, testified that River Oaks did not have personnel on hand to immediately care for trauma patients. A general surgeon, Reginald Martin, MD, further testified that River Oaks was “certainly not the ideal place for a multi-system trauma patient There is only one place where Alisha Peavy belonged and that was the University of Mississippi Medical Center.” The plaintiff argued that the EMS service knew of or should have known that River Oaks wasn’t capable of handling the types of injuries Peavy had sustained.

The court reviewed the EMS protocols, which contained a section titled “Choosing a Hospital Destination.” The protocol mandated the use of a trauma scoring system, in which a patient with a score of 10 or below should be taken directly to a hospital with Level 1 or 2 trauma capabilities. It further noted that the mortality rate for these patients increases dramatically if there’s a delay in reaching the trauma center.

The EMTs argued that Peavy’s trauma score did not reach 10 or below in the prehospital setting, but also said that due to her condition, transport to the University of Mississippi Medical Center (UMC) was initially considered. However, when Peavy began deteriorating en route and the traffic delayed transport to UMC, they decided to go to the closest facility capable of stabilizing her, knowing that the hospital would be able to give her blood, which couldn’t be done in the ambulance. However, the court also noted that the EMS protocol under which the crew functioned mandated that the paramedic should “contact medical control if there is any doubt as to which hospital a patient should be transported to.” On cross examination, the EMT, Doug Ming, admitted that he had not contacted medical control prior to the transport to seek such input.

Rick Carlton, MD, medical director for the Central Mississippi EMS District, who’s responsible for writing the district’s protocols, testified that the applicable protocol was the “Emergencies” protocol, mandating that patients be taken to the closest hospital capable of managing their emergency condition, while considering the patient’s (and family’s) hospital preference. He believed the EMTs had met the standard of care because Peavy’s trauma score didn’t reach 10 or below during transport.

The child’s grandmother accompanied EMS during transport. She had initially requested another facility, but Ming appropriately declined to transport there because the hospital didn’t have an emergency room. The grandmother ultimately concurred in Ming’s decision to transport the patient to River Oaks. Testimony at trial showed that River Oaks, interestingly, didn’t make any attempt to divert the ambulance to another hospital or to inform Ming that they weren’t equipped to handle the patient. In conflict, Ming’s documentation, written shortly after the transport, stated that the emergency physician on duty told him that River Oaks couldn’t handle this kind of patient. When the surgeon arrived, he asked which ambulance had brought Peavy to this hospital and why. Ming again responded that it was the closest facility that could stabilize her. The surgeon told Ming that River Oaks couldn’t handle this patient and that he should have transported to UMC. He further testified that EMS probably did “more harm than good” for the patient.

This case, which traveled from the trial court to the Supreme Court of Mississippi, was reversed and remanded back to the trial court for further proceedings to determine whether the decision to take the patient to River Oaks was a remote or more proximate cause of her death. Further information about the case was unavailable.

The lesson to be learned from this case is the importance of transporting patients to the appropriate facility. It’s ultimately easier to defend an EMS decision to transport a patient to a higher level of care than it is to defend transport to a facility selected by family members. These same family members will later testify that they relied on the expertise of the EMS personnel to transport the patient to an appropriate facility. EMS protocols should be strictly adhered to, and if there’s doubt about the proper facility, EMS should always contact medical control for assistance.

Click herefor more on ethical and legal issues in EMS.