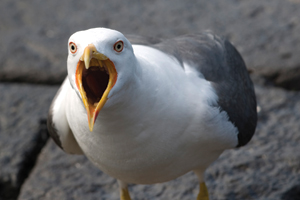 Much has been written about “seagull managers,” a term that became popular in the book, Leadership and the One Minute Manager: Increasing Effectiveness through Situational Leadership. On p. 38, it says, “Seagull managers fly in, make a lot of noise, dump on everyone, then fly out.”

Work in EMS long enough, or for enough organizations, and eventually you’ll have a boss who’s a seagull manager. This management style is probably most prevalent in EMS organizations overseen by a board of directors when most of the people on the board, if not all, have no knowledge or background in EMS and are only around on a part-time basis.

Problems can develop because board members feel they’re qualified to make decisions affecting an EMS operation instead of just setting strategic objectives.

Usually, the seagull manager criticizes, has nothing positive to say, is opinionated and isn’t open to listening to others–even someone who has substantially more EMS background than they do. They usually want to argue their point and feel they’re right no matter what.

Travis Bradberry, PhD, was involved in a study conducted by TalentSmart, a think tank he co-founded, that examined more than 150,000 managers from some of the world’s leading organizations. The managers studied represented every industry and management level.

Traits
The TalentSmart study showed that the most proficient and best managers do the opposite of what seagull managers do. The managers who lead the teams with the greatest amount of performance possessed three critical traits that were exactly opposite of the seagull manager’s dominant traits, which are swooping, squawking and dumping.

If you’ve ever worked with a seagull manager, you know they swoop in with the mission to set their team straight on whatever subject or issue is involved. In contrast, managers who excel in their management and leadership skills have their subordinates already heading in the right direction. There’s no need for them to swoop in or set their team straight because they already have a vision of where the organization or team should be heading.

Most seagull managers aren’t heard from unless they feel they must be heard and usually communicate by “squawking.”

In comparison, the TalentSmart study showed that managers with excellent habits have clear and concise communications with their subordinates.

The third trait of seagull managers is dumping on their teams during their performances. In contrast, managers who have superior characteristics provide continual feedback, both positive and negative, to their subordinates. It can be easily understood and isn’t overwhelming.

The seagull manager rarely interacts with their employees. They show up only when they feel there’s some kind of fire to put out. They fail to seek solutions based on the best information on a subject from those who know it best. They put little thought into their approaches and they usually make a bad situation worse, leaving their team feeling aggravated.

Hopefully, you aren’t one, but chances are, you’ve encountered a seagull manager. You can spot them easily when they hover above you and start dumping.

Solutions
What can you do if you work for a seagull manager? This depends on the type of job you have. If you’re already in some type of EMS management, such as quality improvement (QI) or training in which you have a lot of independence, then your best approach to dealing with the seagull manager is to listen patiently and then ignore them. As long as your QI or training programs are valuable, the seagull manager has little they can say about your area of responsibility.

But if the seagull manager is interfering with your job performance, you need to meet with them and clearly articulate the problem during that meeting, letting them know they’re creating barriers and problems.

If the situation is really bad, you may need to be assertive during your meeting. Chances are, it will take more than one meeting to resolve the issues. Remember, seagull managers think they’re the most important person in the organization. It may be tough getting through to them.

If you’re an EMS manager, you must avoid being a seagull manager. There’s nothing more demoralizing or aggravating to a staff than a management style that includes little respect for subordinates, fans the flames of aggravation and puts them in a position in which they have little respect for you.

One of the best skills you can use to avoid being a seagull manager is to listen. If you’re listening, you shouldn’t be talking. And when you’re listening, subordinates will feel valued, and you may also learn something in the process. Someone once told me seagulls are nothing but rats with wings. Whatever they are to you, avoid being one. JEMS

This article originally appeared in September 2011 JEMS as “Swoop, Squawk & Dump: How to deal with seagull management.”