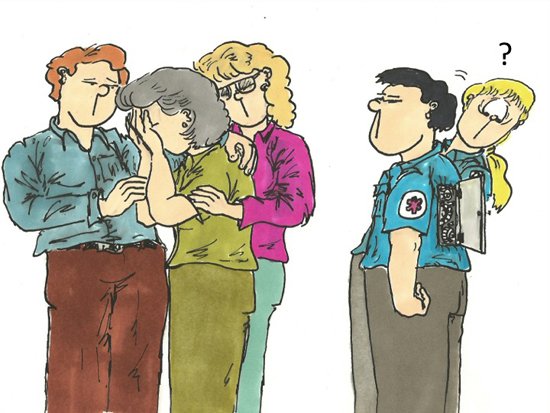 I stood frozen like a statue at her door–knuckles raised, in standby knocking mode. I was immobile. Only my eyes were capable of movement as I stared back and forth between the hastily purchased flowers I held in my left hand, and the peephole in the door. All of the drapes were drawn, but I could hear movement inside.

“Bad idea,” I concluded. “Time to go.” But before I could move, the doorknob started to turn. I squinted my eyes for a hint of life behind the slowly cracked door frame, but heard only, “What do you want?”

The voice sounded so sad and tired that I immediately felt like an intruder. With no further ability to speak, I thrust the disheveled flowers between myself and the narrow doorway and blurted, “I’m sorry. I’m sorry you lost your baby yesterday.”

No response–a deafening silence followed. The sad and tired voice, now choked with tears, asked, “Who are you?”

“I’m the paramedic who came here after you called “¦”

BAM! Before I could finish saying 9-1-1, the door was slammed in my face.

“Well, that went well.” But the sad and tired voice had only shut the door long enough to release the indoor chain. She opened the door halfway and extended a hand, still holding a Kleenex, and frantically ushered me inside. “Sit,” she commanded, pointing to the couch.

As I scanned the living room, the previous day’s events unfolded in rapid succession–respond, secure, evaluate, withhold resuscitation, support, referral, “clear.” The police, fire and EMS on scene had performed their duties calmly and professionally, with a guarded empathy that I can only assume was to dissociate themselves from the mother’s unrelenting cries of raw grief.

Thump! She dropped a photo album flat on the coffee table, startling me out of my dazed state. She looked at me with her red and swollen eyes and gestured me to open the pages. There lay images of her baby–pink, not blue in color. Her eyes were sparkling with light, not fixed and dilated. Smiles full of joy, hope and promise were captured forever in those pages. No words were spoken between us, and I unexpectedly found that my tears had now joined hers. She clasped my shaking hand and said, “You all see so much ugliness and sadness. I wanted you to see my real baby. Not the one you and your colleagues saw. She was so beautiful.”

I simply can’t convey the remainder of this story without giving it the justification it deserves, but I will say this: That woman helped save my career that day.

Her child’s death was the fourth SIDS death I’d responded to in two weeks. Twenty years later, I’m not sure why I felt compelled to go to her house the following day. I’d like to think it was to give her comfort. But the truth is, we EMS providers need consolation too, even if it has to come from other survivors. Grief and pain is the price we pay for caring and loving others. Compassion hurts, but do we have the courage to recognize it, display it and treat it for ourselves?

On May 7, 2016, I’ll be joining fellow American and Canadian EMS and firefighter colleagues on a long-distance cycling journey as part of the Heroes Are Human Capital-to-Capital Bike Ride and National EMS Memorial Bike Ride. The 1,000-mile journey from Ottawa, Canada to our nation’s capital is aimed to raise awareness of the high rates of mental health issues, substance abuse and suicide among first responders, while recognizing the lives of EMS providers who’ve died or become seriously injured in their lines of duty.