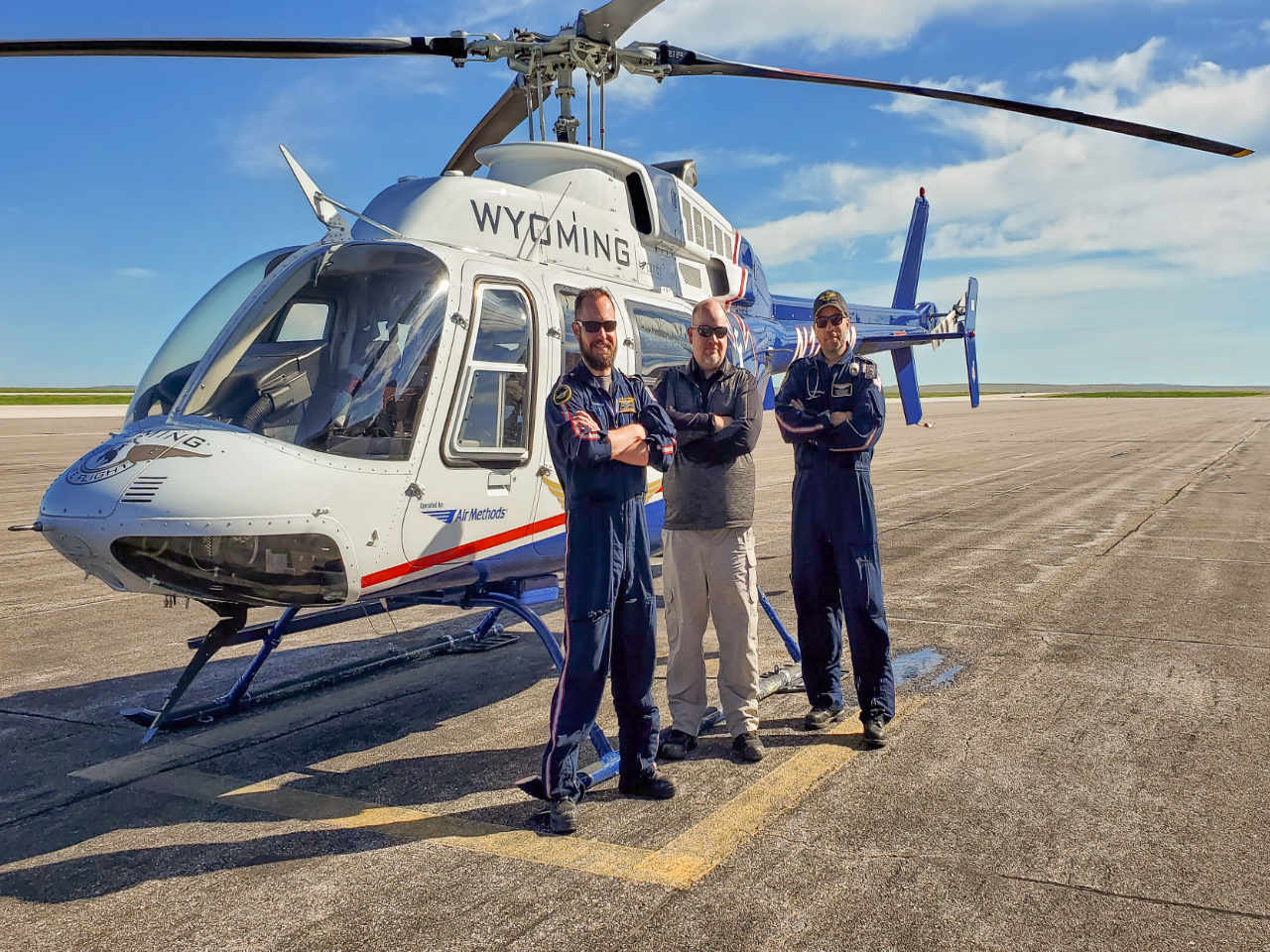 This article discusses the steps in creating a ground-air EMS intercept standard operating procedure (SOP). The importance of simultaneously including all response agencies in developing the SOP is highlighted. Lessons learned in resolving SOP development, including misperceptions about when to dispatch air support, identifying landing zones, and the preference for direct ground-air EMS communication rather than using dispatch services are discussed. The article also forecasts how technology advances could further improve the ground-air intercept efficiency.

An efficient, coordinated, multi-agency response is critical to improve patient outcomes for time urgent events, such as cardiac arrest, ST Elevated Myocardial Infarction (STEMI), thrombolytic CVA , multi-systems blunt trauma with hypotension etc. (Eisenberg, 2013). The coordination of this response is further complicated in rural settings by factors such as the availability of a paramedic needed to provide higher level care for cardiac events and the long transport times to the nearest definitive care facility (Mell et al., 2017).

In an earlier article, we focused on lessons learned from coordinating a tiered response between two EMS services. In a ground-intercept the rural EMS service (with no staffed paramedic) responding to a time urgent event requests assistance from the nearest paramedic-staffed EMS service (Renger, Harness, Souvannasacd, & Granillo, 2018). The two EMS units then travel toward each other, on an intercept path, to reduce the time until the patient can receive paramedic assistance. This type of ground intercept is useful when commute times to a definitive care facility are relatively short. However, in remote states like Wyoming, the ground transport times to a definitive care facility can be over two hours (Pringle, Carden, Xiao, & Graham Jr, 2005). In these situations, a paramedic air intercept is required to reduce the time to definitive care.

Coordinating an air-ground intercept presents several distinct challenges as compared to a ground-intercept. The easiest and safest intercept occurs when the air support can meet at an interim care facility, such as a critical access hospital (CAH). This is because the CAH can assist in patient stabilization and is equipped with a helipad for safe landing and patient transfer. For the intercept to occur at the CAH, the travel time to the CAH for the EMS ground unit relative to air support must be a) about the same, and b) the CAH must lie between the EMS and definitive care transport route. In other words, if the response location is such that the ground EMS unit must travel in the direction of CAH to reach a definitive care facility and the timing is such that the air support would be there at the same time (so that the patient is not waiting), then this option is the most time efficient and safest for the EMS providers and patient.

Coordinating the intercept location is a challenge. Although helicopter air support is versatile, several conditions must be met for a safe intercept, including a safe landing zone (Association of Air Medical Services, 2012). In our rural Wyoming county, these landing zones had not been defined. This meant that ground-air intercepts were happening, pardon the pun, on the fly. Thus, intercepts were not necessarily occurring at the most time efficient and safest locations. Recognizing this as an issue, the county EMS service, air EMS service, and CAH embarked on a systematic approach for correcting this problem. The purpose of this article is to describe our approach with the hope other ground and air EMS services, and their affiliated medical facilities who may find themselves in a similar situation, can apply our lessons learned.

We began by recognizing the coordinated response to a time urgent medical event requires a systems approach (Renger, 2015). Successfully moving a patient from the response location to definitive care involved at least six agencies: ground EMS dispatch, the ground EMS service, the CAH ER physician, the EMS air support dispatch and the EMS air support service. Consistent with systems change, we recognized leadership from all agencies needed to jointly develop a communications standard operating procedure (SOP) (Alonso-Serra, Blanton, & O’Connor, 1998; Bleetman, Sanusi, Dale, & Brace, 2012; Crowe, Wagoner, Rodriguez, Bentley, & Page, 2017; Renger, 2015; Renger, Foltysova, Renger, & Booze, 2017). It is noteworthy that EMS air support leadership were especially appreciative of being included in the process as it was their previous experience that their input was not sought. This created misunderstandings about when they should be called and where they could land resulting in avoidable time delays.

During our first meeting we established a draft ground-air intercept SOP. One key SOP element included the need for the responding EMS service to receive direction from the CAH ER Physician to proceed directly to a definitive care facility. For the CAH ER Physician to make the decision, he or she needed to read the patient EKG, and/or get a full patient status report from the “boots on the ground.” The EMS ground unit requires data connectivity to transmit a patient status, or communicate effectively with the CAH. This fact then became a key consideration in establishing landing zone sites as the EMS service would need to be able to send patient status updates to the definitive care facility until the air support paramedic assumes medical responsibility for the patient.

Another key issue discussed at the initial meeting was when to dispatch air support. The ground EMS service was hesitant to request air support until arriving and completing a scene assessment. One factor contributing to this hesitation was the cost of requesting air support. Often, the dispatch information is incomplete or inaccurate; what may have sounded like a time urgent event may in fact be an issue that can be handled at the CAH (e.g., broken legs, arms) or vice versa (Dami et al, 2015). The responding EMS service was reluctant to engage air support only to have to turn it back after the scene assessment. The EMS air support noted they would be preferred to be dispatched and turned back, than to be dispatched later. This is because it takes about 20 minutes to assemble an air crew and be airborne. In a time-urgent event, this lost time can be the difference between life and death. The air support leadership reassured the ground EMS service these costs were built into their operating expenses. Having reached this understanding, it was agreed that if there was reasonable certainty of needing an air intercept the request would be made immediately.

For their role in the response, the CAH leadership noted the ground-air intercept SOP posed no new challenges for them. That is, the established transfer and admission protocols with numerous definitive care facilities was not dependent on the intercept type, so they did not need to make any internal SOP changes, or SOP changes with their definitive care facilities, except notifying them that the transfer was coming by ground or air.

Both ground and air EMS services raised concern about using their respective dispatch services as a communication link for intercept coordination. The risk of creating confusion was reasoned to be higher if two additional, non-medical agencies were being used to relay communications. Thus, after being dispatched, the ground and air EMS services agreed to communicate directly for the purpose of coordinating the intercept using a common radio frequency. This was a great example of how the systems theory concept of the reflex arc was applied in a real world setting to improve system efficiency (Renger et al., 2017). The final EMS ground-air intercept SOP is shown in figure 1.

To establish landing zones, it was agreed that ground and air EMS services would each identify staff who would normally respond and have them drive the main county arteries together to define the most time efficient and safest landing zones. This proved to be a very rewarding and productive process. The time together driving afforded the opportunity for mutual learning. For example, the ground EMS staff became more appreciative of the challenges facing the helicopter pilot in landing and taking off in the summer and winter. Similarly, the air EMS service gained a better appreciation for the connectivity challenges impacting communication and key decision points facing the responding EMS unit impacting time to the CAH or definitive care facility. It is clear the level of mutual respect and appreciation increased in both parties.

As a result of the joint mapping exercise, 15 landing zones were identified that met the criteria. The ground EMS service entered the GPS coordinates into a mapping function and created a landing zone map for the EMS driver (see figure 2). Similarly, air support entered the landing zone coordinates into their air navigation system and created a satellite image of each location to assist pilot navigation (see figure 3). To assist communication each landing site was labeled using the interstate mile marker system.  For example, 29-187 was interstate I-29, mile marker 187. When on county roads with no markers the rural route county address would be used. For example, 865 Mayoworth Road, which would be a ranch location or residents along the rural route that would be found in the standard GPS.

Figure 3. Detailed Satellite Image for One of the Landing Zones

The draft ground-air intercept SOP was then revisited to establish how the ground and air EMS services would work dynamically to choose the best intercept landing zone. Factors like the changing patient conditions as well as changing weather, impact air and road response times (Pringle et al., 2005). Thus, it is necessary for the ground and air EMS units to be in constant communication. As noted above, it was agreed to bypass the dispatch services and engage in direct communication using a radio channel (VMED 28). It was also agreed the ground EMS would provide current location and direction of travel, which the air support would use to plot an intercept route. Once the air support obtained a visual of the EMS unit, the driver and pilot would establish the nearest predetermined intercept landing zone.

Coordinating a ground-air intercept involves many moving parts. Adopting a systems perspective assisted in understanding how best to understand which partners to include and how to improve efficiencies in the ground-air intercept SOP. The most important factor is for all parties to work together, simultaneously in developing a response SOP. Developing the SOP jointly helped each agency understand the extent to which they needed to modify their own, internal SOPs to accommodate the agencies with whom they are coordinating.

It is important to note developing the SOP together mimics the Homeland Security Exercise and Evaluation Program (HSEEP) discussion-based table-top exercise, bringing multiple agencies together, each modifying their SOPs based on the scenario presented to them (Smith, 2016). Thus, the joint SOP development process itself results in an improved product over the current reality. However, the communication and ground-air intercept SOP is a living document. Consistent with continuous quality improvement, the SOPs will be revisited, by all partners together after each real-world event to make necessary modifications.

Systems theory suggests a next step is to consider how advances in information technology can improve response efficiency (Renger, 2015; Renger et al., 2017). For example, the technology is available to provide the ground EMS the quickest transportation route to a definitive care facility. The ground speed and direction of the EMS unit can also be tracked in real time and relayed to the air-support which could then calculate and advise which of the predefined intercept locations is the best option. Likewise, the air support path and time could be tracked and relayed to the ground EMS unit. It seems this technology is available but simply hasn’t been developed to match this particular need.