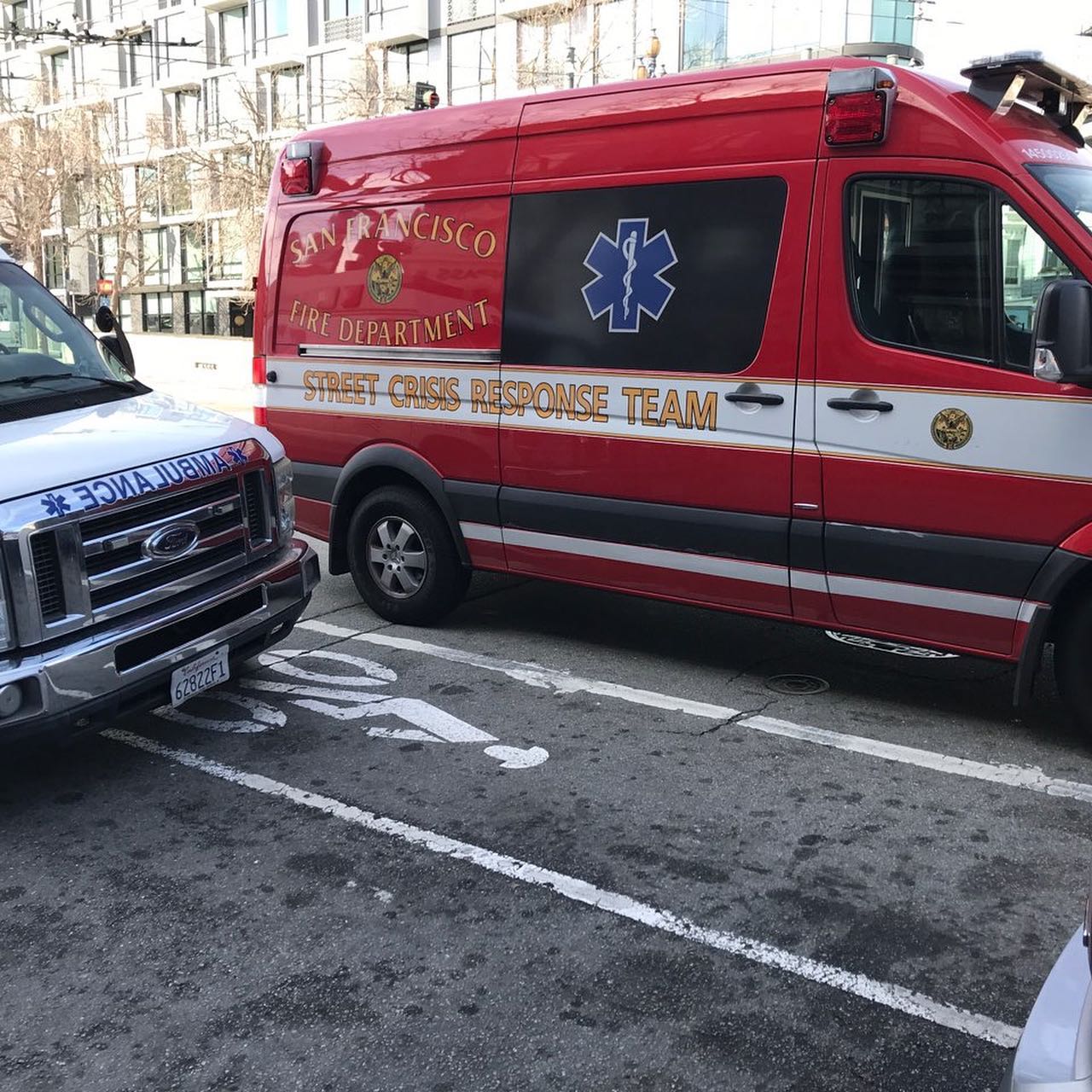 When San Francisco paramedics responded to a 911 call about a “person in distress” on a recent morning, they found a man sprawled out on the sidewalk outside the 16th Street Mission BART Station.

The man, who was wrapped in dirty blankets and wearing pants matted with feces and dirt, hadn’t moved in at least a day. The putrid smell around him was so strong that it carried across the street.

They soon discovered he needed to go to the hospital — immediately — to treat an infection in his leg. But the man, who also seemed to be struggling with a mental illness, didn’t want to go.

“I don’t want to push you,” one of the paramedics said, calmly and patiently. “But I need you to understand that this could be life-threatening.”

Realizing they needed more help, one of the paramedics called in reinforcements: San Francisco’s new Street Crisis Response Team. The three mental health professionals respond to some 911 calls in place of police for those who are mentally ill, high on drugs, homeless — or, often, all three.

The teams, which will be fully initiated this summer, have been hailed as a compassionate way to coax the city’s most vulnerable into care. Mayor London Breed has also touted them as a key element in her road map for police reform, which she introduced last year amid the national protests over police brutality.

The goal is to reduce what supporters say is the city’s over-reliance on police, particularly during sensitive situations that require a trained mental health professional.

The model has been spotlighted after last year’s police protests, with other cities — including Denver and Los Angeles — starting their own pilot programs. In Oakland, city officials are working on starting a pilot street crisis program with the Fire Department.

Many of these programs, including San Francisco’s, are inspired by an acclaimed, decades-old program called Cahoots in Eugene, Ore. The teams saved the Eugene Police Department an average of $8.5 million each year from 2014 to 2017. San Francisco’s teams — funded through 2018’s Proposition C business tax — cost about $10 million a year.

But in San Francisco, where thousands of people live on the streets, early program data shows that the city’s four teams are able to address only a fraction of the overwhelming demand. Even with the planned addition of two teams, many still expect the revolving door between the hospital and the streets to continue.

That’s because San Francisco has limited long-term care options for those who want help, with too few beds in residential treatment programs and a shortage of housing and case managers. The city has also been slow to use a law that allows it to force some extremely mentally ill people into care.

Still, experts, advocates and politicians around the country widely agree that the presence of trained mental health professionals — rather than police — can save lives.

On that recent morning in the Mission, persuading the man to go to the hospital first required building trust. Clinical social worker Stephanie Chiri, who arrived in a big, bright red van emblazoned with the Street Crisis Response Team’s name, started by offering a cookie and a bottle of water.

“Hey there,” she said, as she walked toward the man. “Is it OK if I get closer?”

Since starting in November, the teams have responded to 20% of all calls for a “mentally disturbed person” — about 1,027 in all through the end of April — according to city data.

Breed proposed a sister branch of teams last week that will respond to some of the 18,000 wellness calls a year, which range from helping a homeless person lying on the sidewalk to checking on an elderly person.

The city plans to have six crisis teams that work around the clock by July 15, said Simon Pang, who leads the Fire Department’s street team efforts. He said success will be measured by whether people they help are less involved in the criminal justice system and follow their care plans.

Kara Chien, managing attorney for the mental health unit at the San Francisco Public Defender’s Office, said the street teams — even in their limited capacity — could be a boon to public safety.

While the program won’t make the city’s street crises disappear, Chien said it may help prevent some tragic outcomes related to a wider breakdown in mental health care.

“If they consistently engage, the hope is that they will start to get treatment,” she said.

Back at 16th and Mission, Chiri and her two other colleagues spoke to the man for nearly an hour.

Eventually, he agreed to go to the hospital. Barely five minutes after the ambulance whisked him away, the team — which covers the Mission and Castro neighborhoods — was dispatched to help another person around the corner.

“There’s something moving in my mattress!” said Paul Lumpkin, arms flailing. “I’ve been sleeping in my wheelchair for a week!”

Lumpkin, who lives in a single-room-occupancy hotel at 16th and Mission and also struggles with a mental illness, said no one was listening to him. Chiri said they’d try to contact his case manager and figure out what was going on.

As her colleagues gathered more information from Lumpkin, she kept her eye on another man down the block, hunched over and muttering to himself.

The crisis teams were created as part of Mental Health SF, a major initiative to reform the city’s care system, which is often understaffed and overwhelmed. But Mental Health SF has struggled to get off the ground during the pandemic.

Supervisor Hillary Ronen, one of the architects of Mental Health SF, said the crisis response teams look like “a promising program.” But to be successful, she said, the city must increase its long-term care options, from case managers to residential treatment programs.

According to city data, 9% of the street crisis teams’ encounters have ended in a 5150, an involuntary mental health hold for those who are a danger to themselves or others. Meanwhile, 18% were transported to a hospital and 18% to a program such as residential care or drug treatment.

The majority of the crises are resolved on scene, which means the person is left where found. But it is unclear what happens to people after the team leaves.

Angelica Almeida, who oversees the teams for the Department of Public Health, said that last month the city started an Office of Coordinated Care, which has helped people access care. Three clinicians in that office are dedicated to the crisis teams, and the city hopes to hire six more by the end of the summer.

She said the department didn’t have any data yet on long-term care placements.

Steve Fields, CEO of Progress Foundation, which runs a network of residential mental health programs in the city, said that without an expansion in the system, all the city is doing is cycling people back out to the streets.

“Just stopping them from disturbing people in public may serve some purpose in our community,” he said. But “If we keep adding people (to the system) and we don’t have resources, then what are we going to do about it?”

Meanwhile, across the city from Chiri’s team in the Mission, another crisis unfolded.

A man with no shirt or shoes bounded into traffic in the middle of Market Street, stopping several cars in the intersection. He held his stomach and yelled in agony as he stumbled toward the sidewalk.

Eventually catching himself on the side of a building, he sat against the wall with his face crunched up in pain.

A few minutes later, a second Street Crisis Response Team patrolling the Tenderloin got a call: Someone was in distress.

0
Firefighters and EMTs tried resuscitation efforts on a dog suffering from smoke inhalation at a three-alarm fire on June 30.