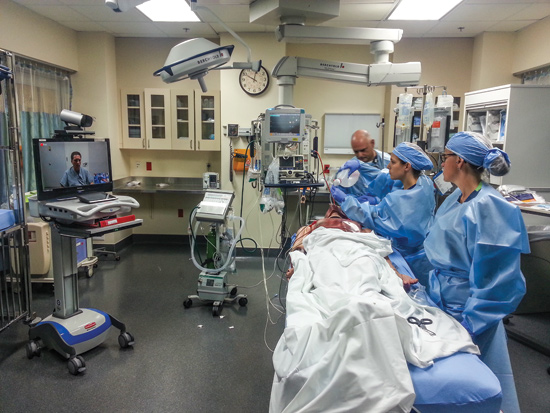 A major hurricane threatens the Gulf Coast-evacuations clog roads and strain resources as first responders rush to prepare for the destruction and injuries to come.

A commuter plane crashes on takeoff, igniting jet fuel into a fireball that engulfs the wreckage. Casualties, many severely burned, are rushed to the area’s trauma center.

Resources during these incidents become spread out and strained. Key facts are lost in translation. The needs of the patients rapidly overwhelm available healthcare professionals and supplies.

These are the trials and tribulations facing first responders and first receivers since before “mass casualty” became a hallmark phrase of our era.

In times of crisis, effective communication among healthcare providers can mean the difference between life and death. Although the challenges and threats facing first responders continue to grow in our increasingly complex world, the proper deployment of new technology offers novel ways to overcome and adapt to these challenges.

Modern advances in portable computing such as tablets and smartphones, increasingly sophisticated wireless networks, and the advent of high-definition audio and video technology are revolutionizing everyday life and emergency services.

What was once “video conferencing” has evolved to become “tele-presence.” Today, healthcare applications of modern tele-presence technologies, known collectively as “telemedicine,” are drastically transforming patient care. 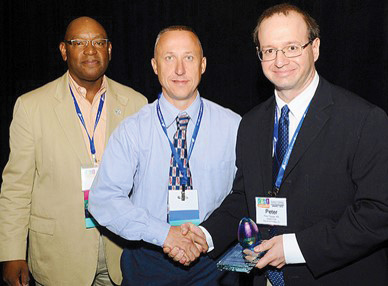 Over the past decade, Florida’s trauma centers, in partnership with the Florida Department of Health (FDOH), have actively studied the value of modern tele-presence technology to better connect first responders with medical facilities, and those facilities with one another. This bold leap into the future of medical communication is known as the Florida Emergency Trauma Tele-Network (FETTN).

Envisioned by the late Jeffrey Augenstein, MD, the FETTN was founded at the University of Miami Miller School of Medicine’s Ryder Trauma Center (UM/Ryder). With support from state and federal funding, the FDOH’s partnership with UM/Ryder and the Florida Committee on Trauma encouraged the creation of “hubs” for tele-presence at major trauma centers across Florida.

Health First has a long history with telemedicine, establishing the first tele-intensive care service (eICU) in the southeastern United States in 2004. Joining the FETTN was a natural extension of Health First’s telemedicine initiatives. Both groups were involved in an area of joint research where the potential utility of virtual triage in a mass casualty scenario was being evaluated.

During a series of mass casualty exercises at Holmes Regional, a total of 58 mock casualties were triaged using the START protocol by on-site physicians and, virtually, physicians at UM/Ryder. Patients were triaged to the same color code (i.e., red, yellow, green or black) 78% of the time between on-site and tele-presence physicians, with 97% of patients triaged within one color code or the other.

In 2011, this early work was presented at the Eastern Association for the Surgery of Trauma’s 24th Annual Scientific Assembly under the title “Flying by Wire: Testing telemedicine in a mass casualty incident.” Based on the success of this collaboration, Health First/Holmes Regional was awarded an FDOH grant to become a hub for the FETTN that same year. 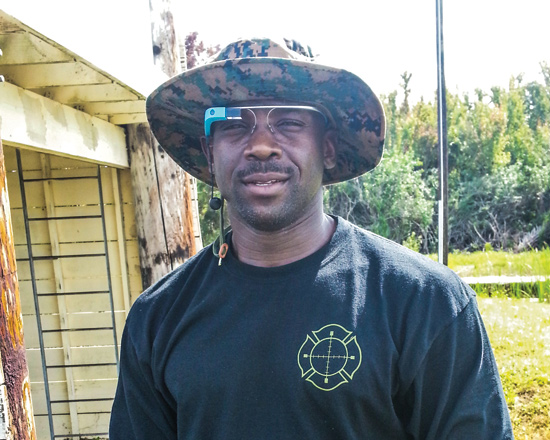 Technology continued to advance in 2011, offering new opportunities for trauma tele-presence. In the past, accessing a server hub required dedicated, and often expensive, terminals. The new HIPAA-compliant software, loaded onto modern laptops and personal computers, allowed for high-definition audio and video connections between FETTN users.

Tele-presence servers also offered virtual conferencing that enabled multiple healthcare providers and facilities to confer simultaneously. The ability to connect a greater number of healthcare providers quickly, securely and at a greatly reduced expense created new possibilities for FETTN. A particular area of interest to all stakeholders was the use of the technology to better integrate medical communications during mass casualty events, as well as support disaster management training and education.

In 2012, with the support of Health First, the FDOH and UM/Ryder, I developed the SPARROWnet initiative: Secure, Portable, Accessible, Redundant, Reliable, Operational, Woven network. It created a medium for education, casualty triage, expert consultation and virtual incident command in support of Florida’s system of trauma centers.

From its inception and recognition by the FDOH in April 2012 to June 2015, the SPARROWnet initiative connected 23 of Florida’s trauma centers with EMS agencies, training centers and community hospitals.

Along the way, SPARROWnet enhanced disaster management training, education and communication for mutual aid across the state’s system of emergency medical care.

In terms of infrastructure, the program was built on a “hub and spoke” model, where tele-presence servers were established at three sites across Florida. Using commercially available, HIPAA-secure software that could be loaded onto a variety of devices, SPARROWnet partners were connected to these hubs and, by extension, to one another.

These hubs, referred to as SPARROW “nests,” included UM/Ryder in the south, centrally located Health First and the FDOH in the north. 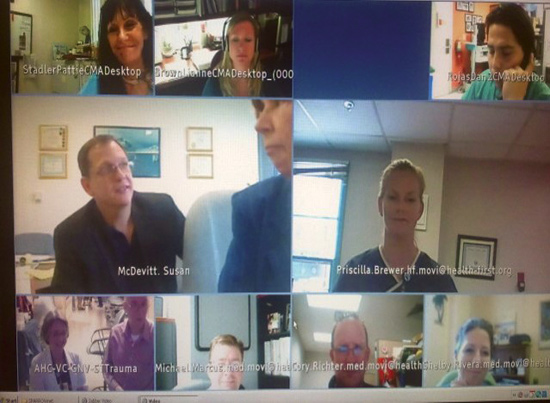 Hurricane Isaac preparations are discussed via SPARROWnet during a statewide conference. Photo Peter A. Pappas

One of the key aspects of SPARROWnet was the regular testing of its operability across diverse healthcare providers. Over the course of the program, multi-site exercises connected an average of five partners with up to eight different trauma centers, community hospitals and EMS agencies.

The phrase “practice before you play” is applicable to EMS and hospital systems as well. The virtual mass casualty drills allowed us to evaluate the ability to “ramp up” and virtually deploy specialist expertise, support field triage efforts and enhance transfers between hospitals. This allowed receiving facilities to both “see” and “hear” the patients they’d soon be managing.

The network of healthcare providers connected via SPARROWnet has also provided an excellent opportunity for projecting education across Florida. SPARROWnet and the larger FETTN have made virtual instructor support possible for courses including Pre-hospital Trauma Life Support (PHTLS), Disaster Management and Emergency Preparedness (DMEP) and Fundamentals of Critical Care Support (FCCS).

UM/Ryder also supports the University of Miami International Tele-Rounds, which connects some 60 trauma centers on four continents to review complex cases and updates on the latest research and practices in trauma care worldwide.

In September 2012, the program’s ability to connect trauma and EMS stakeholders across Florida was put to the test in a real-world activation. As Hurricane Isaac meandered its way along Florida’s Gulf Coast, SPARROWnet was activated to assist in coordinating state-wide response and planning, bringing together nine trauma centers, the FDOH and Florida EMS leadership.

More than a video conference, this event demonstrated the success of SPARROWnet in providing emergency medical stakeholders with secure, homegrown means of communication under their control.

First responders often work in a rapid and complex environment, so a key aspect of deploying tele-presence in their field was finding opportunities when it would enhance provider/patient interactions without becoming cumbersome during triage, stabilization and transport.

The modern first responder is faced with dangerous and evolving challenges. We live in the era of the active shooter, where high-risk, multiple casualty events can appear anywhere and at any time. At the frontline of these events are EMTs and paramedics tasked with supporting law enforcement. This evolving group of first responders offered us a new chance to test the limits of tele-presence in the field.

The result was the Tactical Telemedicine (TACTEL) initiative. The TACTEL concept allows EMTs and paramedics supporting law enforcement to connect directly from the field to a regional trauma center, providing real-time triage support and medical communication in a diverse variety of scenarios.

The TACTEL pilot program was a team effort between a major regional trauma center, local law enforcement and fire/rescue services. TACTEL gives paramedics assigned as SWAT team medics access to secure tele-presence servers, and allows medics in the field to connect with the latest technology, including laptops, handheld devices and glasses that support tele-presence software.

During a series of SWAT training exercises, TACTEL was evaluated in terms of its technology, clinical effectiveness and operational effectiveness by first responders. The program was deployed in more than 10 SWAT training exercises that involved 18 patient scenarios, including trauma surgeon/medic interaction for patients with gunshot wounds, head injury and extremity bleeding.

This mobile health technology allowed for real-time interaction between trauma surgeons and SWAT medics on the need and techniques for tourniquet application, neck and spine stabilization, and respiratory assistance.

In addition, the information that flowed from the scene to the trauma center proved how invaluable field tele-presence can be. Through TACTEL, a surgeon and the trauma center are able to acquire facts on casualties in real-time with their own eyes, which allows them to streamline preparations for patient arrival and management.

Training with TACTEL expanded SPARROWnet’s reach and capabilities to support first responders while providing them with real-time casualty information for the trauma team-the “first receivers.”

Hospital, municipal and community support have been critical to the pilot program’s success. Other critical elements include guideline-based training, establishing criteria for activation, use and deactivation, and contingencies for technical failure. FETTN, SPARROWnet and TACTEL have demonstrated the reach and power of today’s technology-tele-presence brings healthcare providers and their patients together in new and previously unimagined ways.

In the right hands, and at the right time, telemedicine can strengthen communication between first responders and first receivers and create a more seamless path for patient care. The result can be a new era in emergency medical communication as revolutionary as the advent of citizens band and handheld radios.